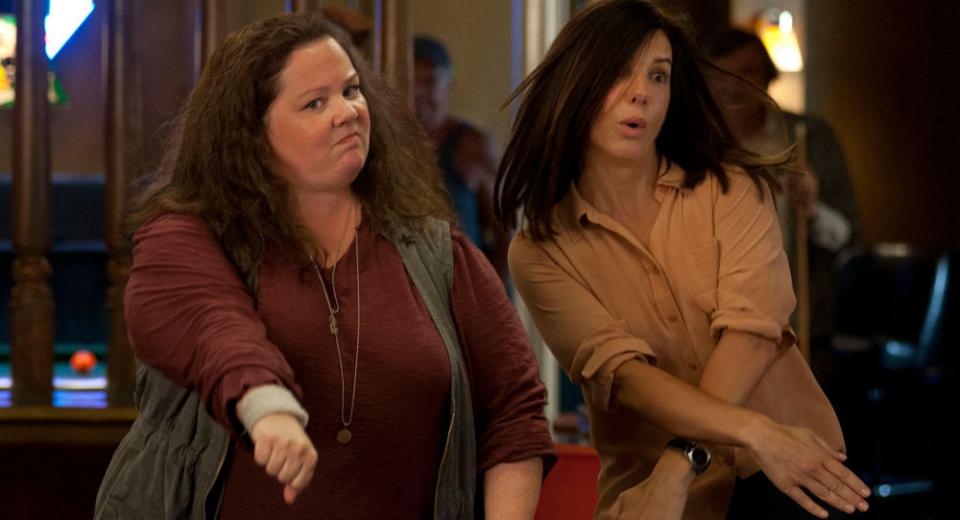 The buddy movie has been around for so long it seems incredible to think there’s still anywhere to go but The Heat manages to achieve that by simply changing the gender of its two main protagonists. It’s been over thirty years since Eddie Murphy and Nick Nolte established the template for the mismatched buddy-cop movie in Walter Hill’s 48 Hours and it makes you wonder why it’s taken so long for someone to team up two women. After all they’ve managed to team up Clint Eastwood with an Orangutan, both Tom Hanks and Jim Belushi with a dog, James Caan with an alien and even Whoopi Goldberg with a T-Rex for God’s sake - so surely someone thought of two women? Apparently not.

Actually that’s not strictly true, there was an attempt at a female buddy-cop comedy back in 1988 with Rebecca De Mornay and Mary Gross teaming up in Feds but it bombed. Well it may have taken 25 years for Hollywood to generate enough courage to try again but The Heat was worth the wait and based on early box office numbers will be a major hit. It’s certainly the funniest film so far this year and that’s in no small part thanks to the pairing of Sandra Bullock and Melissa McCarthy. The latter has been on something of a roll since her breakthrough performance in Bridesmaids and it should come as no surprise that she gets many of the best lines in The Heat. However it’s Bullock who is a revelation, reminding us just what a capable comedienne she actually is and delivering some truly stand out slapstick.

The problem is that previously Sandra Bullock has picked some awful comedies to headline (All About Steve being the worst offender) and thus her undoubted talents weren’t allowed to shine through. However in The Heat, a very funny script by Katie Dippold (who writes on the excellent Parks and Recreation) and solid direction from Paul Feig who also made Bridesmaids, have allowed Bullock to deliver some of her best work in years. The film centres around a straight-laced FBI agent, played by Bullock, who is forced to team up with a slobbish and very foul-mouthed detective, played by McCarthy, in order to catch a drug dealer. Whilst it might seem like you heard that plot before, and frankly you have, what makes it refreshing is the two leads.

Sandra Bullock plays the straight-laced and somewhat smug Ashburn perfectly and despite being good at her job, everyone else in the FBI hates her. She is incredibly annoying at first and her refusal to swear pays off superbly later in the film, as does some brilliant physical comedy on the part of Bullock. Melissa McCarthy on the other hand has been waiting for a role like this and grabs it with both hands. She plays the foul-mouthed, obnoxious and violent Mullins with relish but also delivers a degree of humanity beneath the rude exterior, especially in relation to her awful family. McCarthy gets the lion’s share of the lines and she doesn’t let them go to waste. She also gets to do a phenomenal amount of swearing, so much so that she would make Eddie Murphy’s character in 48 Hours blush. How times have changed, at the time of its release in 1982 many reviewers commented on the salty language in 48 Hours but these days it seems almost quaint.

The two leads are ably supported by an excellent cast that includes Thomas F. Wilson (Biff/Griff/Maddog Tannen in the Back to the Future movies) as the police captain, although he doesn’t shout as much as the archetype and he could do losing a few pounds. There’s also Michael Rapaport (Mighty Aphrodite, Hitch), who plays McCarthy’s rather dim brother - not much of a stretch there - and Marlon Wayans (Scary Movie, Requiem for a Dream) as an FBI agent with a crush on Bullock’s character. Dan Bakkedahl (Veep) has a fun time as an albino DEA agent and there’s a running joke about how everyone suspects him because of his condition. This is a reference to all the albino villains in movies such as Lethal Weapon, Cold Mountain, Hellboy II, the Da Vinci Code, End of Days, the Matrix sequels and Foul Play - there are even clips from the latter two in the film itself. There’s also the improbably monikered Spoken Reasons, who plays a drug dealer and looks so much like a young Will Smith that Jada Pinkett should request a paternity test.