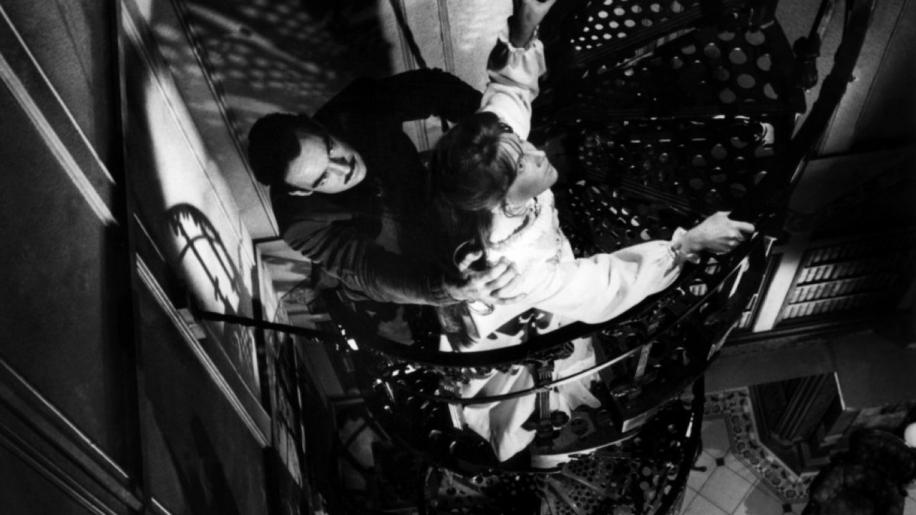 Boasting a splendid anamorphic 2.40:1 presentation, The Haunting's brooding imagery is showcased with a keen eye for shadow and atmosphere. Having cropped up numerous times on TV in an atrocious pan-and-scan version, and even with a bogus letterbox image that was just a dire cropping to cash in on the “new” trend for Widescreen (“... as it was meant to be seen” ran the advertising blurb) VHS releases, it is a sheer joy to see the twisted compositions that Wise and cinematographer Davis Boulton had created to visually capture Eleanor's descent into madness. And even though there is grain and a little bit of print damage, the image is actually nowhere near as problematic as some reviewers have made out. I viewed my copy on a 44 inch screen, lights suitably dimmed and the film fairly leapt out at me with life and vibrancy. The transfer's contrast level does a good job of keeping blacks solid and strong, faces and illumination light and convincing - although there can be some occasional glaring - and the mixing of the two ends of the spectrum in the same frame delightfully evocative and sharply delineated.

Detail is very good, too. Just look around the interiors of Hill House at all the furnishings, the bric-a-brac and the paintings and statuary. The rickety spiral staircase is well captured by the disc in all its kaleidoscopic swirling, as are the packed shelves in the library and heaving, breathing door. Long shots around the parlours and the gothic corridors have a depth that is enticing, and the exterior of the house offers up lots of fascinating minutia from the texture of the stone to the playing of shadow about the parapets and spires. There is some hazing and shimmer on some surfaces, though - Dr. Markway's jacket, for instance - but the disc copes admirably most of the time.

Print damage is actually only slight, with the odd speckle and hair playing about the image. The afore-mentioned grain is inconsistent - appearing to engulf some shots whilst vanishing altogether during others. Compression defects are not in evidence, with only edge enhancement posing a problem at all. Overall, this is a reasonably fine transfer that, again, sits very nicely alongside its perfect companion piece of The Innocents with a disc that, might not be as scrubbed up, but still reveals its black and white photography with a fine sheen.

The original mono track has a slight tendency to drop in volume, which is a little annoying, but is pretty decent for the main part. It handles the score with some warmth and integrity and keeps the nerves on edge with the many sound effects that assault the inhabitants of Hill House. Dialogue can be a touch muffled at times, although there is never an occasion when the speech is lost or drowned. Some voices can sound slightly dislocated, though. The celebrated booming during the spectral attacks still has some weight behind it despite the limitations of the single channel, although some form of remixing - if only into 2-channel stereo - would, perhaps, have enhanced moments when we hear voices and children crying through the walls. I don't often feel that an old film would benefit from anything other than its own original soundtrack, but I think there is a case for The Haunting getting a makeover in some future release.

The Commentary, whilst a good one, is a patched-together effort from Robert Wise, screenwriter Nelson Gidding and cast members Julie Harris, Claire Bloom, Richard Johnson and Russ Tamblyn, who have all been recorded separately. However, it is great that the entire main cast were able to provide their memories and opinions on the film. Wise covers the technical aspects with regards to the fabulous camerawork, the use of music and sound effects on set, and the style of directing he employed. He is particularly fond of the black and white photography and the score from Humphrey Searle. Harris, whilst clearly proud of her work on the film and full of praise for her director, admits to having taken Eleanor's character too much to heart. Isolating herself from the rest of the cast (and not getting on with Claire Bloom at all) was, in fact, all part of a bout of depression that she was undergoing at the time. All the others adhere to the fact that she was having problems whilst making the film, though Russ Tamblyn, rather chivalrously asserts that she was probably just trying to stay in character. Tamblyn is quite motor-mouthed when he gets going, but offers a nice collection of memories at playing the part he had initially turned down. Johnson is actually the best speaker on offer and fires off a nice barb at the remake before delivering plenty of anecdote, recollection and, in fact, quite a wide-ranging discourse on the acting profession at large. He is particularly keen to point out the difficulties of performing whilst eating a meal - how any actions undertaken pose enormous and time consuming problems for continuity and editing. Bloom supplies some nice candid reminiscences too, and Gidding is also a fine conduit for accessing the ideas and themes incorporated into the screenplay and how his view of The Haunting being undeniably a ghost story was to alter radically whilst actually filming it.

A good, all-round commentary, folks, that is breezy, interesting and fact-packed.

And then, besides the long, preachy trailer (2.38 mins), we get a smattering of stills that cover some alternate titles, some gimmicky ESP cards, a range of the terrific original poster art and a few cast portraits and behind-the-scenes photos. For a classic such as The Haunting this is a very poor assortment. Then again, I am fairly convinced that an all-singing, all-dancing version will come along one day.

The Haunting is a classic of psychological horror. It benefits from a close adherence to its source novel, fine performances from all involved and a director who took the gothic brooding of the tale seriously and refused to allow the movie to fall into the camp silliness that many other filmmakers would have been unable to avoid. The cinematography is wonderful and the atmosphere that is generated is truly amongst the eeriest and claustrophobic ever committed to celluloid. The ambiguity of the tale, similar to that of The Innocents, is the ace up it sleeve and an element that was a brave and intelligent step to take when Hollywood was churning out B-genre flicks that were designed to thrive purely on spectacle and daft effects. Watching The Haunting is like stepping out from the world for a while, such is its power to transport the viewer to the lonely despair of Hill House, providing a uniquely unsettling experience that never fails to chill. The aural attacks on Theo and Nell are amongst the most frightening and intense that the horror film had to offer before the nihilistic seventies tore down the barriers of cinematic terror, and they still pack an emotional wallop even now.

The disc does a fine job of recreating that terror with a very decent visual transfer, although I do find the mono track somewhat lacking. The extras are threadbare, but benefit from an interesting chat track that provides plenty of insight into the production of the film.

Very highly recommended indeed - perfect for a dark and stormy night double-bill with Clayton's The Innocents.