With a team of seasoned pros, the right contacts and plans for the perfect heist - what could go wrong? 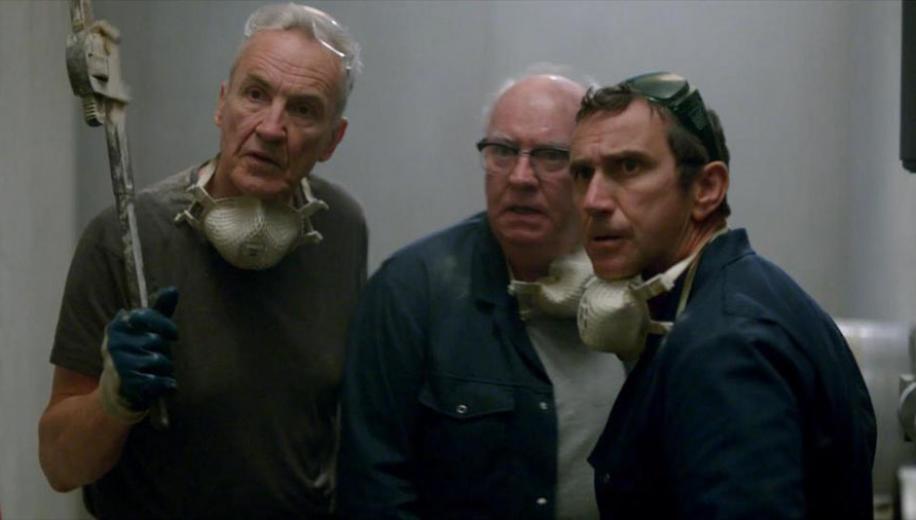 Ronnie Thompson directs the brilliantly 'British' The Hatton Garden Job - a fantastically stylish heist movie based on the events of the 2015 Easter weekend robbery.

We can all just about cast our minds back to April 2015, when five men decided to take on a job that would become recognised as the largest heist in English legal history. The mark was The Hatton Garden Safe Deposit Company which had an estimated £200 million tucked away in individual safety deposit boxes. In a time and age where technology is paramount and good old fashioned bank robberies are things only seen in the movies, this heist managed to capture the attention of the press and public alike. The fact that the robbers were mostly over 60 only made the story all the more interesting and fascinating. But how do you make a film about an event that happened a mere two years ago.
Not just that, how do you keep the story interesting when the public knows how it all ended. The film doesn’t take the normal route of dealing with the private lives of the robbers, instead it chooses to focus on what was in the press and the details that the general public had access to. Mixing fact and fiction the team behind the film added in elements of their own to keep the story intriguing and exciting. The writers created a character behind the robbery, the mysterious unknown man that got away with it, and dubbed him XXX in the script. They also came up with side stories involving a bent ex-policeman and the Hungarian Mafia to help build up the world within the film. After a pint or two down the pub to weigh up the risk factor, Reader eventually accepts the job and calls in the remainder of the group: driver Kenny Collins (Clive Russell) and the ‘muscle’ Terry Perkins (David Calder). And so our group of veteran criminals set about planning what would become the biggest heist in English history. But with the added conflict and demands of the Hungarian mafia, East End high-roller Marcus Ford (Stephen Moyer) who has retired Detective Chief Inspector Frank Baskin (Mark Harris) under his wing, and the constraints of old age, our gang soon realise that even the best laid plans have their kinks.

Director Ronnie Thompson was tasked with bringing this real life event to the big screen and does so extremely well writing the script alongside Ray Bogdanovich and Dean Lines. Sticking to the truth where possible Thompson and his writers had to come up with back-stories to bring the film and the various elements together. Focusing on the actual robbery and how Reader and the group went about it, the narrative drive focuses predominantly on the ‘how’, forgoing the ending where they all (aside from XXX) get arrested. And it’s because of this that the characters become not only likeable but are shown as ordinary guys that achieved something extraordinary.


It’s enjoyable from the get-go with great performances throughout


Filmed over 25 days in 2016, over locations in and around London and studios in Stratford, the team set about recreating the robbery. Production designer Jeff Schell and his team built a replica of the actual Hatton Garden vault which the actors had to drill through for real which gives the scenes of the robbery a quality that faking it would have denied the film. Working with cinematographer Arthur Mulhern, Thompson’s film has a distinctive nod towards the films of Guy Ritchie using voice overs, split screens and cut aways, which inject energy and life into what could have been a very dull interpretation of the events. The lively music is befitting of the entire tone of the film and matches the action on screen perfectly. Everything about this film fits together and works cohesively.

It’s not a gangster film and steers clear of violence or profanity but that certainly isn't to the detriment of the film. In fact it’s quite an old-fashioned and pleasingly nice movie, from the scenes in a greasy spoon to the flasks of tea and sandwiches wrapped in foil they take with them on the job. It’s these little touches that contribute to it feeling like a 'British' film and make the characters almost endearing.

There is no faulting the cast who are all equally brilliant in their roles. Matthew Goode’s character XXX is pure fiction and not much is given away about him but he acts as the driving force behind the job and as the age contrast being the youngest of the group bringing in humour along the way. The older members of the gang played by Lamb, Daniels, Russell and Calder are great in their representations of the real-life robbers. Lamb plays the leader keeping everyone in check; Daniels is the youngest of the four who gets the gear together needed to break through the wall, Russell plays the chain smoking, emphysema suffering get-away driver and Calder is the diabetic story teller of the group. Together they convincingly deliver performances that are funny, likeable and believable, so much so that you’re almost willing them to get away with it at the end.

The Hatton Garden Job tells the tale of the most unlikely robbers and how they set about pulling off the robbery of a lifetime, and one that had it been successful would have seen them set up for life. It’s just the right amount of funny and delivered in a visually impressive way with great performances throughout. It just goes to show, never underestimate your elders!