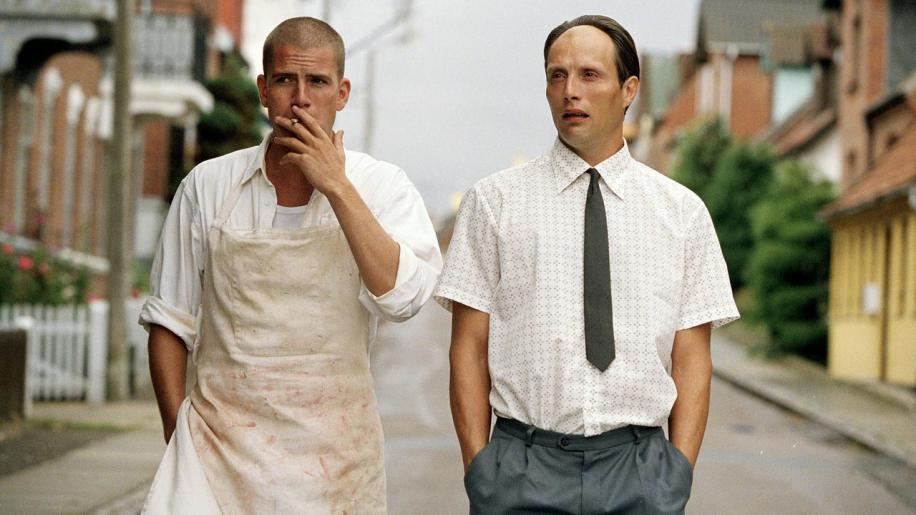 Svend (Mads Mikkelsen) and Bjarne (Nikolaj Lie Kaas) are two misfits working behind the scenes for the domineering Holger (Ole Thestrup) in his butchers shop located in a small Danish town. Tired of his place on the sidelines, Svend persuades Bjarne to go into partnership with him and open their own specialist meat shop. After a disastrous start and an empty shop, things look bleak for the pair. A terrible accident involving the walk-in freezer and a moonlighting electrician occurs and leaves the fragile Svend with a body on his hands. In a blind panic Svend decides to dispose of the corpse by filleting it and serving it as chicken to his customers. Unbeknown to him the locals just can't get enough of his exotic delicacy, and the pair must find some way of supplying the growing demand and coping with their new found fame. Released in 2003, Danish director Anders Thomas Jensen's pitch black comedy finally gets a long overdue release, which is great news for anyone who is a fan of the kind of offbeat surreal humour that rarely makes an appearance in most popular cinema. This is a wonderfully pitched and often hilarious little gem of a film that deserves to garner a loyal cult audience. I can't say I've ever been won over by the humour of many previously lauded European films, finding them often overly stylised and slapstick in nature. Green Butchers however, is a far more subtle and restrained affair (certainly more so than Delicatessen, which it has been compared too), and is all the better for it. The humour of the film comes from the wonderfully irreverent script and the excellent playing of the lead characters. Relying less on obvious signposted humour and more on quirky character development, Green Butchers is the kind of film the Coen Brothers haven't made since the turn of the millennium. The script is full of wit and invention, and any film whose opening gambit on the sausage states “there's something almost mythological to killing an animal and then mocking it by sticking it in its own intestines” deserves endless kudos. Prime acting honours go to Mikkelsen (best known by his turn as Tristan in King Arthur), whose turn as the unhinged butcher Svend really is a joy to watch. Simultaneously irritating and endearing, its great fun observing as he gradually loses his grip on reality and the corpses start mounting up. Mikkelsen is ably backed up by Nikolaj Lie Kaas as Bjarne, and the pairs strained odd-couple relationship elicits humour, sympathy and revulsion in equal measure. Kaas also takes a secondary role, as Bjarne's brain-damaged twin brother Eigel, here looking worrying like Spike Jonze's take on John Malkovich. The protagonists are less real people, more cartoonish caricatures operating within this strange insular land. It's a credit to the quality of the script and direction that these individuals are still given the depth and consideration to draw us into their predicament with such ease, despite their outlandish characteristics (Svensd's outrageous hairline and profuse sweating being a particularly endearing quirk). Green Butchers also wins with an idiosyncratic and satisfying visual appeal, which recalls Terry Gilliam minus the mammoth budgets. Shot with a distinctive palette of icy greys and blues, Jensen's film comes across as almost fairytale like in its approach. Devoid of any given time and space, the film emerges as almost fable-like, albeit a fable with cannibalistic butchers as its heroes. There is a distinctive visual flair and originality which rarely seems to make the journey across the Atlantic and exhibit itself in mainstream productions, and makes this a captivating pleasure to watch on an aesthetic level. Green Butchers is certainly not judgemental of its characters; in fact its morality is unashamedly lax of its heroes, despite the despicable acts they commit. To some that may seem like an inherent flaw, a lack of forethought and depth in the script to fully appreciate the cause and effect of their actions. To me however, this does nothing to dull the qualities of the film. This is black comedy at its finest, revelling in the humour of the situation despite its horrific reality. It's refreshing to see a film that doesn't preach and allows its characters to find their own way to redemption. This is a fun, original and most importantly enough entertaining film that should be given a chance by everyone. Direction and characters are spot on, and its invention and offbeat charm makes it the ideal antidote to conventional comedy.