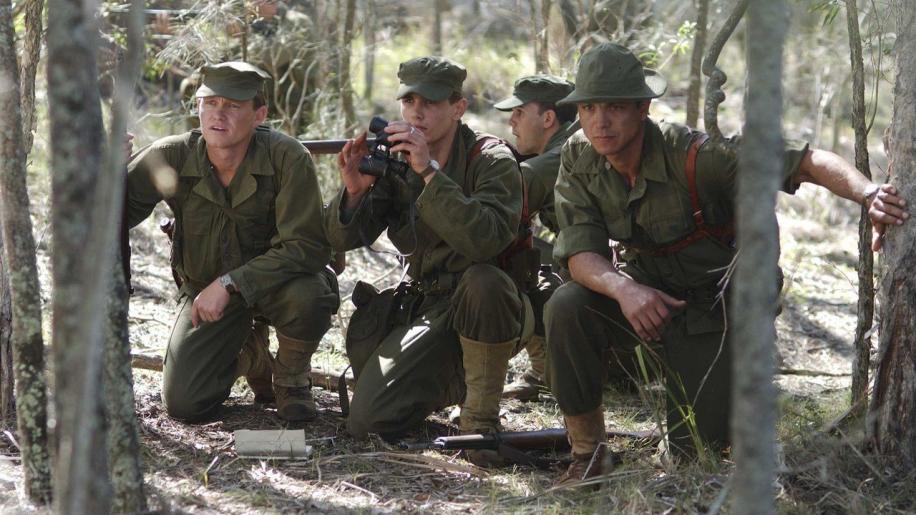 John Dahl has opted for a bleached-out sheen for his film that translates perhaps a little too well to the anamorphic 1.40:1image on this disc. However, I personally don't favour this effect as it renders the picture somewhat colourless and devoid of character, draining away lots of its vitality. It also has the unfortunate side-effect of reinforcing the grain still evident on the print and the edge enhancement transferred onto the disc. Daylight sequences end up quite harsh and over-brightened as a result, with some, the wide shots of the horrible execution scene for example, looking just awful because of the drained, stark look. This seems to affect the detail in a lot of distance shots, too. Check out the buildings in the camp in long shots, or the guards in front of them.

Colour, therefore, can't really be tested in any true objective fashion, I'm afraid. But I can say that the greens of the surroundings and the fatigues of the men are fairly well rendered. And the flickering candlelight in the church and the small variety of colour in the bustling town scenes do register, however. But, when it comes to explosions, flames and gunfire, the transfer is tip top, folks, boasting really bright and gorgeous orange fireballs. It's odd that the image only seems to come to life when people are dying, though. There's got to be a metaphor there, somewhere.

Detail is actually very good despite the over-brightness. The uniforms, the weapons and the foliage are all sharply caught. The stubble on the faces, the gleam in the eyes, the machinery of war and the assorted bric-a-brac in the prison and the Rangers' HQ all appear on the disc with a keenness. Blacks are spot on and reassuringly deep, too, lending a true sense of depth and atmospheric shadow-play to scenes such as the night-crossing and the final raid. There's some great use of glinting reflections and ambient light on the foliage, too. Very good.

However, I did notice that some scenes exhibited some slight artifacting, with some floating trace-lines and a very minimal amount of blocking during a couple of close-up interior shots. So, it's the rough with the smooth. If you like the bleached-out look then you will be happy with this transfer. If, like me, you don't then you may find that it only magnifies the defects inherent on the disc.

Well, now we're talking, folks. Put quite simply, the glorious DTS-ES mix on this disc is awesome. Totally immersive and thunderous and just what you want from a multi-channel bombastic experience. The DD 5.1 EX is good too, but pipped by the DTS. Just flick between the two during the final battle for evidence of the winner.

Producing a huge and dynamic audio range - with tremendous bass levels and crystal clear high-ends - the DTS blazes across the speakers with power and distinction. From the subtle things like ambience, insect humming, street bustle, voice and footstep placement to the heavy weapons fire and vehicle movements, the directionality is absolutely spot on. With nice realism and a natural quality to the sound design, the disc delivers a superb sonic performance that just has to please. The front speakers are blessed with plenty of scope and range, and the rears are just as well utilised, too. The steerage is impeccable with stuff happening all around you even in the quietest of scenes - voices, the clatter of utensils or the lush sound weapons clicking and clacking, all marvellously integrated. The rumbling of heavy vehicles from left to right has massive depth to it, loosening the floorboards and the US warplane buzzing around the prison camp features some cracking side to side sweeps and a great front to back passage right over your head. Very enjoyable indeed.

Trevor Rabin's score may be a riff on James Horner's trademark orchestral surge, but I love Horner's stuff, so I'm quite fond of this, too. And it is just as well, because it dominates the film ... but in a good way. It's big, rich and flowing throughout most of the movie and the transfer does it justice without swamping or muffling the dialogue or effects in any way.

But the best feature has to be the truly incredible depth and clarity afforded the big battle at the end. The gunfire is smart, loud and enthusiastically realistic. But be prepared for the moment when the first tank explodes - boy, that swept the floor from beneath me. The directionality of the zipping bullets is great and the whole shebang really puts you in the heart of the action. Excellent stuff from the DTS-ES.

Be prepared for a lot of repetition with this 2-disc release, folks.

All the extras appear over on Disc 2. Starting with a 2.25 mins Theatrical Trailer that has Mr. Serious Voice-Over Man giving it his all and making the film look far more exciting than it really is.

Then we get an un-titled Featurette (5.21 mins) that sees us in the company of Captain Dale Dye as he takes us through the training regime that the the actors underwent in rugged Australian countryside which stood in for Bataan. He puts the reasoning behind why it is so important to train performers so hard in the skills of soldiering quite succinctly and convincingly. And, let's face it, the effect of this attitude to realism has been proved in movies time and time again - Platoon, Band Of Brothers, The Thin Red Line ad infinitum. Good old Vic (James Bond) Armstrong pops up, too, for an all-too brief chat. He was 2nd Unit Director. John Dahl and Benjamin Bratt surface, as well. But, folks, literally all of this will be repeated later on.

A set of Soundbites follows, each lasting between 2 and 3 minutes and none really offering anything other than small background information on the characters that each actor portrays. John Dahl and Producer Marty Katz have a little bite apiece, too. But it is Joseph Fiennes who really irritates. What he's saying is actually very good and respectful, but the way in which he says it is so sickly and overly humble that it rapidly becomes excruciating.

A quick mention here must go to the English subtitles, which I only really noticed during the Soundbites. Like nearly all Asian DVDs carrying English subs, they are an absolute hoot. For example, “Appalling events they went through” becomes “A venture, they went through”, “An elite corps” becomes “a little quad”(!) and “Cavalier” transforms into the word “Catalyze”. This is the tip of the translation iceberg, though, as there are some real gems amongst all this. It must be worth watching the film again just to read the ludicrous wording dancing in happy lunacy at the bottom of the screen.

Then we get another unique staple of Asian DVDs - the B Roll. Lasting for 10.21 mins this is pure nonsense ... just the filming of scenes as they are being filmed. Who on earth wants to see meaningless drivel like this? You, sir? Right, leave the room immediately, put the kettle on and then watch it boil. Ten minutes too long, if you ask me.

The 8 Deleted Scenes are all titled, but when you access the first one it takes you into an un-advertised Play All. Lasting for over nine minutes, there is, again, very little added to the film with this lot. We see a protracted and mind-numbingly boring weapons inspection, another lingering shot at the pit of incinerated bodies (ah, I forgot to mention that earlier ... grisly) and a little emotional depth afforded Nielsen's character which would lend a tad more weight to her story. But, all in all, these play out like scene extensions, and little more.

Captain Dale Dye's Boot Camp (8.13 mins) was something I was looking forward to because having been in the Royal Marines, myself, and being something of a fitness junkie, I love the down-and-dirty, blood, sweat and tears of physical training. But, once again, this ends up as a pure disappointment, half of it being regurgitated from elsewhere in the special features. One even more annoying aspect is the all-too-often sight of a certain Aussie soap star, who shall remain nameless, larking about. I hadn't even noticed him in the film, which can only be a good thing, I suppose. Lame stuff, I'm afraid except for the snippets of Dye's own military career and exploits.

The Price Of Freedom - The Making Of The Great Raid (19.53 mins) commences with soppy EPK voice-over man inviting us as “we go behind the scenes with the cast and crew”. You know that you are onto a loser immediately with this kind of fluffy making of, don't you? This is actually the worst kind, though. Employing the most sweeping, elegiac (read ripped from James Horner) cues from Trevor Rabin's familiar-sounding score for the film, this piece is overly worthy and sycophantic and packed with that many clips from the finished article and the same old soundbites that I recommend you just skip through until you get to the tiny bit where the real-life veterans get a chance to have their say. A pitiful feature, I'm sorry to say.

Next up is something that actually surprised me ... because it's quite fresh and new, and fairly comprehensive. Mixing The Great Raid (9.53 mins) places us alongside John Dahl and sound designer Jon Johnson at the sound mixing desk as they attempt to create the aural landscape for the film. Johnson is pretty informative about how it's all achieved and how the dialogue, the effects and the score are all slotted together to shape the sound into an engrossing and immersive environment. Editor Pietro Scalia has a few words, as well. Some may find this boring, but at least it offers something different to the endless sappy repetition of the other features, even if, ultimately, it only really pays lip service to the work of the sound engineers.

Ah, remember advising you to skip through the waffle and get to the veterans in that pathetic making of? Well, lookee here ... they've repeated it all again for you in its own separate segment. The Veterans Remember (7.35 mins) has plentiful archive footage - and a lot of it quite distressing, too - and copious interviews that do go beyond what you will have seen earlier. Hampton Sides, author of Ghost Soldiers, provides some historical reminders of the events and then we get to meet some of the survivors from the camp and even one of the Rangers who went in to set them free. Their anger and their memories still burn within their haunted eyes, yet this snippet is all-too brief to do their sacrifices justice. They deserve more than this on a disc that chronicles their terrible plight.

Folks, don't be fooled by the quantity of extras on this release. They are not worth it.

The Great Raid is a hit and miss affair. It's a tremendous story, but John Dahl treats it like a TV movie. The acting is no great shakes, but the cinematography is good (if only they hadn't used the bleached-out look, though.) The narrative should be compelling, but falls far short and the action, whilst commendably realistic, lacks the visceral bite that would have increased the excitement. Still the disc sounds awesome with a terrific, full-on DTS-ES mix.

The extras are pretty lame, though. You won't learn much more than the lengthy prologue already taught you and the amount of repetition will soon get on the nerves.

Overall, I would watch the final battle again - just to enjoy the AV blast of it all - but I doubt very much that I would sit through the entire thing again. Could be a case of try before you buy, folks.