Not only one of Peckinpah’s greatest films of all time, but one of McQueen’s too. 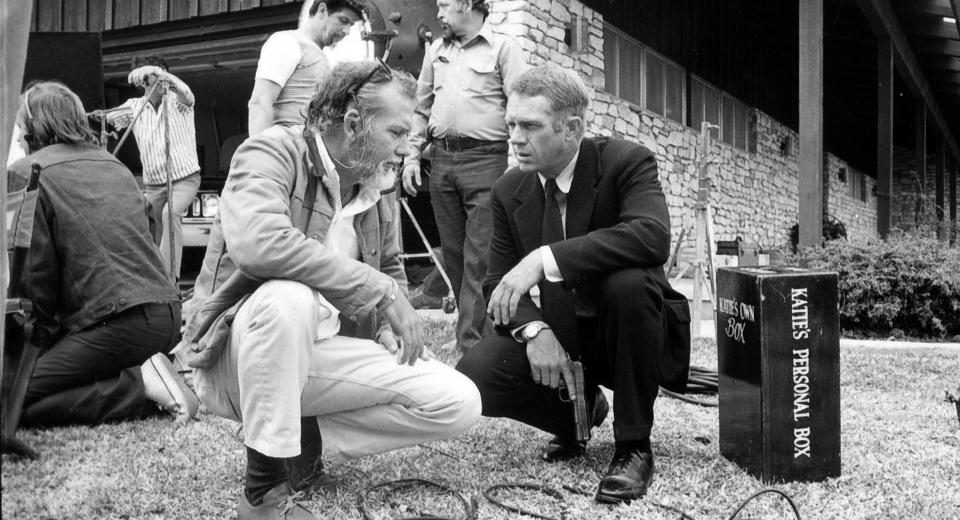 Concluding my inadvertent trip through Sam Peckinpah’s greatest – and not so greatest – films, after looking at the excellent Studio Canal release of his strong war flick Cross of Iron; dipping into one of his worst-but-most-successful features with the superb Optimum release of Convoy; venturing all the way to Italy to find a decent release of my (and his) personal favourite, his best-but-least-successful Bring Me the Head of Alfredo Garcia; and then over to France for the start of his downfall with the excellent release of The Killer Elite, we close with a look at my third favourite feature from the equal-parts legendary-and-notorious filmmaker, The Getaway. It’s ironic timing, of course, since an unrelated Ethan Hawke action vehicle simply called Getaway has recently had a limited theatrical release (although the negative reviews it’s garnered probably mean that it would be better to revisit this classic Peckinpah flick than bother with the newer feature).

Based on dark noir crime thriller author Jim 'The Killer Inside Me' Thompson’s gritty novel – and upon a screenplay first adapted by Thompson himself, and then further embellished by Walter 'The Driver' Hill – 1972’s The Getaway marked director Sam Peckinpah’s second collaboration with the King of Cool himself, Steve McQueen, following their against-type rodeo drama, Junior Bonner, shot the year before. For my money, it’s not only one of Peckinpah’s top three greatest films of all time, but also one of McQueen’s too.
Although McQueen – at the height of his success – would use of all his Hollywood clout to mould Peckinpah’s vision to suit himself, much to the ill-tempered director’s chagrin, this arguably had some positive influence on the end result: stripping the script of the journey-into-figurative-and-literal hell ending that featured in Thompson’s novel, embellishing the action to incorporate McQueen’s military weapons experience and re-scoring the proceedings with a jazzier effort by Quincy Jones. And none of this stopped it from being Peckinpah through and through, complete with the requisite intercut-slo-mo action.

Flight is many things. Something clean and swift, like a bird skimming across the sky. Or something filthy and crawling; a series of crablike movements through figurative and literal slime, a process of creeping ahead, jumping sideways, running backward. (Jim Thompson – The Getaway)

Carter ‘Doc’ McCoy is a highly skilled professional bank robber. He’s also in jail serving a long sentence. After having his parole rejected he sends his beautiful young wife, Carol, to Jack Benyon, a corrupt but influential businessman who he spotted at the parole hearing, in order to broker a deal for his early release. Benyon complies, ostensibly in return for Doc’s help in a big bank heist, partnering him up with a couple of Benyon’s own men. Doc doesn’t trust them for a second, but the real complications come when he realises just what kind of deal his wife made with Benyon, and how far she had to go to get him out.
Sam Peckinpah was clearly way before his time. There’s a pattern to his projects, with his most personal and most retrospectively appreciated films often being the ones that were the least successful. It was almost as if the more involvement and control he had on a project, the less well it would do at the Box Office. Indeed his motto, during the best part of his entire filmmaking life, could have been ‘always looking for a hit’ (but for the double-meaning it would have had in the latter cocaine-riddled part of his career).

After the success of his masterpiece, The Wild Bunch, he ruined his working relationship with Warner Bros. with his comparatively tame The Ballad of Cable Hogue, which flopped at the Box Office (but has since gone on to become something of a cult classic). Travelling to England he attracted further controversy with Straw Dogs, before returning to the States to do his first film with Steve McQueen, another against-type feature, Junior Bonner. He remarked “I made a film where nobody got shot and nobody went to see it”. He was not wrong.

Ironically, it was around the same time that Steve McQueen was finding his own filmmaking troubles. The iconic actor had seen ensemble success in The Great Escape, and had done what many would argue was his best feature – Bullitt – also for Warner Bros. but, strangely enough, had also seen his Warner contract cancelled because the film had gone severely over budget. Of course it went on to become a massive hit, and they tried to woo him back, but his pride had been damaged by then, and so he lost out on the remainder of the 7-picture deal that he had previously had with them.

Pride would also cost him Robert Redford’s place opposite Paul Newman in Butch Cassidy and the Sundance Kid – all because they couldn’t agree on top billing (the same thing almost happened with The Towering Inferno, where McQueen insisted on not only joint billing but also having an equal number of lines to Newman). Instead McQueen would do Le Mans, which flopped, despite also going on to receive retrospective acclaim, particularly from racing circles. So McQueen was also in need of a hit.

Indeed it was McQueen who approached Peckinpah to direct The Getaway. He’d hired writer Jim Thompson to adapt his own novel, but he wasn’t happy with the end results, so he then hired Walter Hill to do a second screenplay, changing the period setting, embellishing the action and getting rid of the surreal ending. Peckinpah wasn’t particularly happy with any of it, but he also had no illusions about what he was setting out to do: make a slick, stylish and highly polished commercial action thriller, and thus raise his market value. This would actually have great benefits – the final cut might have been as much McQueen as it was Peckinpah, but it was an extremely efficient, tense, thrilling and highly entertaining thriller. In fact, it would end up being one of the few Peckinpah films that was critically and commercially successful at the time, and not just in retrospect; his most successful film up to that point and the second most successful film in his entire career.

If you thought Peckinpah films were dark and violent, then you should read Thompson’s original novel. Hell, you should read any of Thompson’s novels. Gritty, pulpy and revelling in the seedy underbelly of society – his almost-impossible-to-like anti-heroes only just outdone by his despicable villains – Thompson’s works have never really seen faithful movie adaptations. And that’s not such a bad thing: the closest we’ve had to a faithful adaptation was back in 2010 with The Killer Inside Me and it was almost impossible to endure.

The Getaway was arguably his most commercially viable project, the streamlined tale of warring lovers on the run from the police, their own bank robber partners and a squad of mob hitmen sent by their backers was superbly efficient, boasting just enough character design and development to give colour to the thrill-laden journey. Sure, the characters would need to be tweaked to make them more palatable – even as anti-heroes they were pretty cold and hard to like – but the real trouble was the ending. It was almost unfilmable (I say ‘almost’ because Quentin Tarantino was a huge fan of Thomson’s book and was particularly inspired by the ending, basically making it into an entire movie – Robert Rodriguez’s From Dusk till Dawn).

Since it doesn’t spoil the film, per se, I don’t mind discussing the original book’s ending:

It saw the McCoys successfully evading all those chasing to them and making it across the border into Mexico and to the fabled El Rey (the very same name Tarantino used for his town in ‘Dawn), only to find that it is far from the idyllic safe haven that they hoped for. With the walls, terrain and armed guards making escape impossible, and with their half-million fortune actually worth relatively little with the extortionate cost of living, their future looks bleak, a fact made infinitely worse when they realise that nobody ever lives very long in El Rey – once they run out of money they go to a different part of the island; the part where the meat is prepared...
Yes, Thompson sent his characters to hell – cannibalistic hell at that – and it was no wonder that McQueen wanted this part of the story written out (hell, even Tarantino turned the cannibals into cannibal vampires to make his version more palatable!). It just had no place being at the end of this tale, even though, in terms of character development and dark outcome, it was a perfect outcome – Doc and Carol were finally inseparable, only in hell.