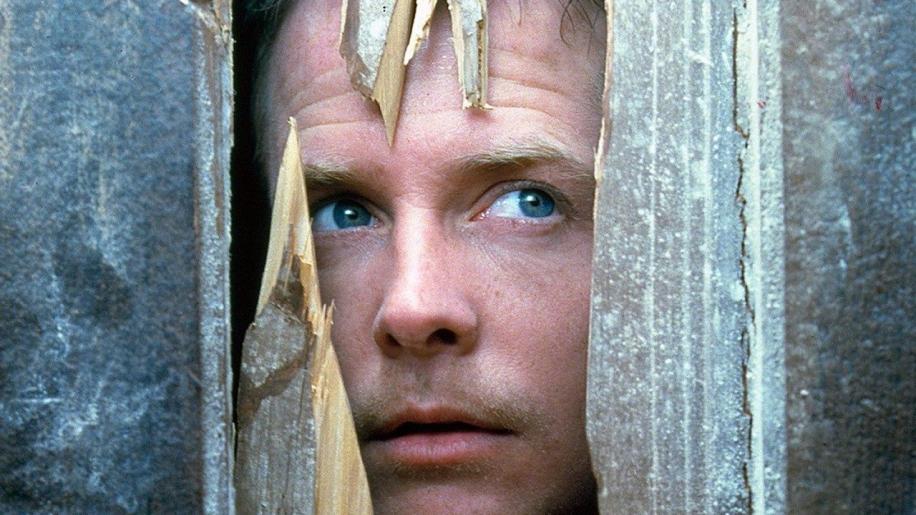 Digitally re-mastered since its last foray into the realm of DVD, this is probably the finest 'The Frighteners' is going to look until the next format release (hopefully not a decade after HD launch unlike this one eh?). Colours are practically faultless, with even fleshtones, solid rendering, and a remarkable breath of scale (with the all important solid blacks). Detail too, is mighty impressive for the most part with only the occasional softness in the clarity, and there are no noticeable alterations in picture quality when the film reverts to the additional footage. There is some evidence of haloing if you look for it, but it's barely noticeable. Likewise there are minute evidences of print damage that crop up on rare occasions but these are negligible in the extreme.

Presented in Dolby Digital 5.1, this is a relatively pleasing mix. The track excels in the action sequences, providing a powerful and dynamic listening experience with a thunderous use of the LFE channel and some impressive special distinction. For the most part the track makes generous use of the surrounds, helping to create the magical atmosphere that makes the film so enjoyable. On the flip side there are a few bones of contention that prevent this from being a textbook audio track. Although it's satisfying to hear the powerful grunt of the bass, on occasion it does overstep the mark and tend to drown out the mix. Likewise, a more meaty vocal treatment could have benefited a couple of scenes, where the dialogue tends to get lost in the mêlée. Possibly these issues may be addressed in the DTS mix of the audio, unfortunately however that's a question only the Dutch or the Germans can answer, as these are the only two releases that include it.

Housed on a flipper disc (yep, you heard that right), 'The Frighteners' is loaded to the gills with some mighty exhaustive additional supplements. Side A offers a brief but entertaining intro with the newly thin Jackson introducing the extended cut of the film, a commentary from the man himself, the obligatory theatrical trailer, and a feature on storyboards. The commentary from Jackson is a joy to listen to, and ranks up there with some of the very best out there on the format. Recorded for the Laserdisc release, this captures a pre-mammoth fame Jackson, who is brimming with anecdotal tales, interesting stories and concise comments. What makes this so refreshing is that he is not afraid to criticise his own work, pointing out a few of the flaws in the film and admirably attempting to explain the reasons for their limitations. This is a great listen. Rounding off the first side is a lengthy feature on storyboarding. This was originally part of the colossal documentary but has been extracted onto it's own for the purposes of squeezing the rest onto Side B. It's not a disastrous choice, as this works very well as a separate piece. Again introduced by Jackson, this takes a novel approach to the clichéd style of storyboard supplements, by creating a 'flick-book' style animation that presents the film in diagram form. Personally I've never particularly been a one for the storyboard supplement, but it's nice to see a different slant taken on the age old formula. Side B of the disc is where the action really is. For the first time on DVD we are treated to Jackson's enormous (this cut runs at 224mins shorn of the storyboards) behind-the-scenes documentary shot at the time of the film's production. This is probably the most in-depth and exhaustive supplemental feature I have ever set eyes on (and, no I haven't seen any of the 'Star Wars' ones before anyone asks and I really don't want to). Separated into an epic 49 chapters, this is detailed in the extreme and this contains most probably every last ounce of information one could ever hope to learn about the movie. There are exhaustive interviews with everyone except the tea lady, from Robert Zemeckis and Jackson through to virtually the entire cast, who trade information, anecdotes and even ghost stories. Areas such as the use of CGI, script development, location shooting, casting, rehearsal and blooper reels are all explored in full. There is simply too much going on here to do it justice in a brief overview. Suffice to say this is the Holy Grail for fans of this movie. Although no doubt this is a superb assembly of extras, it is slightly disappointing to see that this new DVD release is basically just a port of the old ten year old Laserdisc extras-wise, with a few brief introductions by Pete. Whilst still an excellent selection, it's a bit of a shame that it's took a decade to bring this to DVD in the first place, and nothing new of note has really been added in that time. Touch lazy, or where we spoilt already? You decide. Although it contains the same extras as every other release of this new director's cut, it is worth noting that Universal are, for some reason, at present engaged in a love affair with the mysterious beast that is the DVD18 disc ('Casino' and the 'Hammer Horror Series' being two recent examples). Whereas other R2 releases have presented the film across a number of separate DVD9 discs, this R1 release has a single double sided dual layer disc, with the movie commentary and storyboards (which have been extracted from the original documentary) on one side, and the remaining 224minutes of the documentary on the reverse side of the disc. A note of concern is that DVD18 is a notoriously capricious format and owners of a DVD player which is older than a couple of years may possibly experience problems with playback (with jumping/freezing being a common problem).

A great chance to revisit an underappreciated classic from Hollywood's hottest ticket. The only downside to this release is how it compares to alternate regions, but on its own two feet this is a great release and a must for any collection.