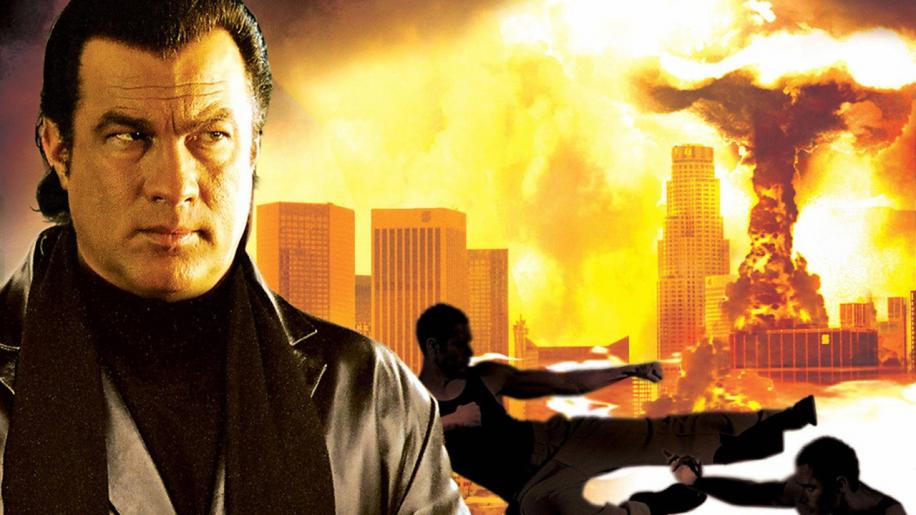 In what must be some sort of record, Steven Seagal returns to the small screen for producer Andrew Stevens in his fourth film in less then a year. The film is also Seagal's second only sequel. Black Dawn brings the character of Jonathan Cold (from The Foreigner) back to foil an Eastern European terrorist group's attempt to detonate a nuclear bomb in America. Seagal has now firmly established himself as the king of direct to DVD action films, so does the improvements made in his more recent films carry on to this latest epic from Sony Pictures?

Jonathan Cold is supposed to be dead, so why has he been spotted by the CIA helping out some notorious international criminals. CIA Agent Amanda Stuart (Tamara Davies) is baffled as Cold was her mentor and was supposed to be dead after the events of The Foreigner (shown in flashback). After her partner is killed, Cold saves her from certain death and they set out to locate the bomb making materials from some sleazy euro trash villains lead by Nicholi (Nicholas Davidoff). The scene is set for Cold to shoot and beat up all kinds of bad guys in order to make his way to one of the most over the top endings in recent movie history.

As with nearly every other recent Seagal movie, the majority of the picture is made in various Eastern European countries. These are made up (sometimes successfully) to mirror various other countries. He has been recently criticised for not lending his voice to the looping of his most recent films and thankfully this film features the man himself talking all the way through the film. Also, the film is over edited to compensate for what appears a fair amount of stuntmen doubling for Seagal in the fight sequences. Seagal is a brilliant martial artist, witness the bar room brawl in Out For Justice. Maybe he is getting old? I don't know, but one thing is for sure I'm not telling him!!

The character is quite a strange choice to return to, as I felt The Foreigner was easily Seagal's worst film. Personally, I would like to see Nico and Gino (Out For Justice) return or even Casey from Under Siege, but seeing as those are Warner Productions and Seagal works only for Sony these days I don't think that will happen. However, there is always that rumour that Under Siege will have a part three. Let's hope so and make sure Katherine Heigl returns as his niece because she has grown up into a fine looking lady.

Production values as always for Andrew Stevens' films are excellent and Black Dawn is no exception. Stevens started out as an actor, you may remember him in Charles Bronson's sadistic thriller Ten to Midnight (a personal favourite) and he went on to star and direct some 'erotic' thrillers. Watch out for him in the film as he cameos as a security guard. More recently he has been involved in Franchise Pictures (The Whole Ten Yards and Battlefield Earth) and now has his own production company. He certainly knows how to churn out the films as Wesley Snipes' The Marksman is another of his recent productions. For Black Dawn, Stevens has recruited experienced Director of Photography Alexander Gruszynski for his directorial debut. Gruszynski has a varied resume and has shot Tremors and 54 in a career spanning nearly 30 years. Predictably, the script could be written on a back of an envelope, but hey when did we watch a Seagal movie for meaningful dialogue and sympathetic characters? The film is a good looking one, but is ruined by some shoddy cheap looking CGI. However, this doesn't ruin the film as the acting is equally as bad and a majority of the cast makes Seagal look like a thespian from the Royal Shakespeare Company. As always Seagal is a massive screen presence and makes the film (as always) credit must be also given to Aussie actor John Pyper-Ferguson who plays scumbag James with his tongue firmly planted in cheek. Anyone who has seen him in Steve Wang's Drive will know what to expect.

Black Dawn is an enjoyable 96 minutes of pure B movie thrills. It's no way as good as Seagal's earlier films for Warner or even the recent Submerged but I enjoyed it and it's an essential purchase for the big guy's fans.