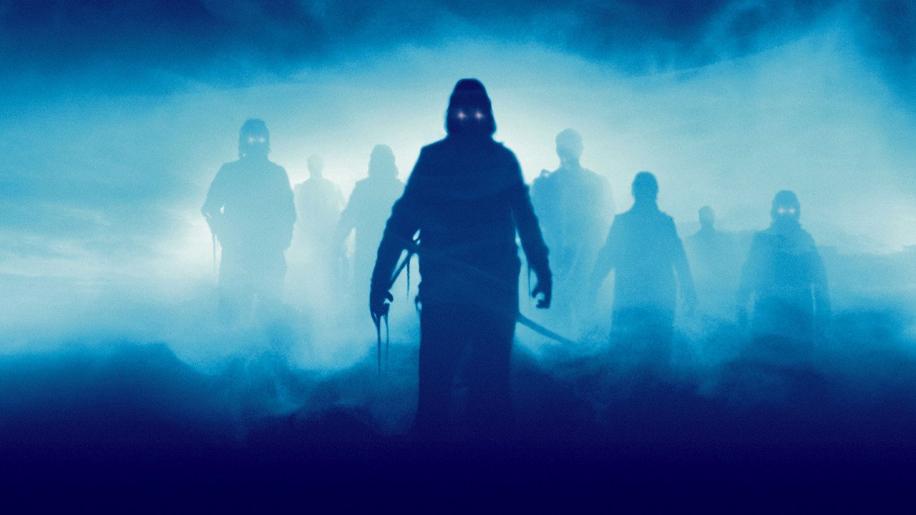 This new edition has a theatrically correct 2.35:1 aspect anamorphically enhanced for widescreen TVs picture with an average bitrate of 6.41 Mbps. For its age the picture is pretty good; it does suffers from looking like a twenty five year old film, however, with damage and grain to match. The most frustrating problem is the detail level, which fluctuates between soft and sharp, not only between scenes, but sometimes within them. However it does clean up considerably after chapter 10; perhaps different source material was used, perhaps the digital clean up was more effective, but whatever the reason it is a flaw with the print. Colours are for the most part well realised, reds look particularly good, flesh tones too appear natural. Brightness and contrast are well set giving rise to some very effective blacks and blues. Digitally, though, there are a few problems with both artefacting and edge enhancement putting strain on an already struggling picture. The fog itself looks remarkably good, considering, but this may have something to do with the aforementioned detail level.

Comparing the two pictures via my 32” Hitachi yielded little difference; both could be detailed by the above description, but the new print did seem to have slightly bolder colours, slightly deeper blacks. It is not until you place comparable frames together that you can get a feel for the differences, slight though they are. The new image does have much better black levels, as you can notice from the screen captures below, particularly the first image. The increased black levels also breathe new depth into the image, as you should notice from below and during the movie other colours are more vivid, such as the car which looks red compared to orange in the original DVD release. However it's not all good, as some of the graininess in the transfer is still visible, but out of the two releases, this has the better transfer. There are three sound tracks to the film, English Dolby digital 5.1, English and French Dolby digital 2.0 mono. The 5.1 track is really quite poor, not in its quality but in its delivery. There is little to no separation of effects, everything coming from the front three. The range itself is good, with a steady bass, but it is still rather lacklustre, the best rumble coming form the final scene when Black reclaims the cross. If there was one disappointment with The Fog's original release it is the sound, which is a front heavy mix with very little in the way of separation and bass. With this new release, there was the perfect opportunity to address these major failing by adding some much needed front/rear separation and overall surround effectiveness. Unfortunately this is not the case, it is the exact same sound track, I'm afraid, right down to the occasional LFE thump. For me this is the biggest disappointment with the new release, after all Hill had the backing to remake the whole film anew, the picture for this release has been looked at, why not secure a little and revamp what is clearly an under par sound track. As disappointing as it is, the 5.1 track is the best track to listen to the film, the mono tracks lacking all presence and depth. As the menus and sound are the same, so too are the discs extras. First up is an audio commentary with John Carpenter and Deborah Hill. It is an entertaining listen, perhaps a little to technical but the rapport the pair share is worth the listen, not quite as good as the Thing, but better than They Live. The two documentaries are both entertaining, the original for its historical value, the 'new' for its hindsight. They contain interviews with all the major cast and crew, Lee Curtis, though is somewhat conspicuous by her absence in the 'new' documentary, her contributions being solely from the 1980's interviews; surprising really considering her input to the Halloween disc. Of the two I enjoyed the later documentary more, all are candid about their remarks on the film, enjoyable it was, but also flawed. The outtakes are brief and contain a variety of fluffs. Rounding off this section is the Storyboard to film comparison, advertising material and photo gallery.

As mentioned above, the only difference between the two sets of special features is the addition of the new Fog trailer. It is a brief trailer, with 2.0 Dolby digital surround sound and serves to introduce the main premise of the film. New faces include Selma Blair and Boon and Shannon from Lost. I must admit that the trailer does an effective job, shame the film doesn't live up to it.

One final point before I leave the extras, the new edition does not contain the pan and scan version that the original release has. Now I know that this is no great loss to those that would never watch it in the first place, The Fog, like so many of Carpenters films require the full scope, it was nevertheless a useful addition to those that don't like the 'black bars', and served as another decent extra. So the big question is; is it worth upgrading to this new edition. A quick look at the facts, the cover (barring colour) and menus are the same; the sound is the same; the extras have gained a trailer for the new Fog at the expense of a pan and scanned version; the new edition does have an improved picture.

As a new purchase the odds are stacked in favour of this newer edition, the improvement in picture quality far out ways the loss of the P&S extra; as for upgrading, if picture quality is your thing, then there is no question. A marketing ploy by MGM to advertise its new Fog, you bet, but at least it is a version with enough difference to make you think about changing.