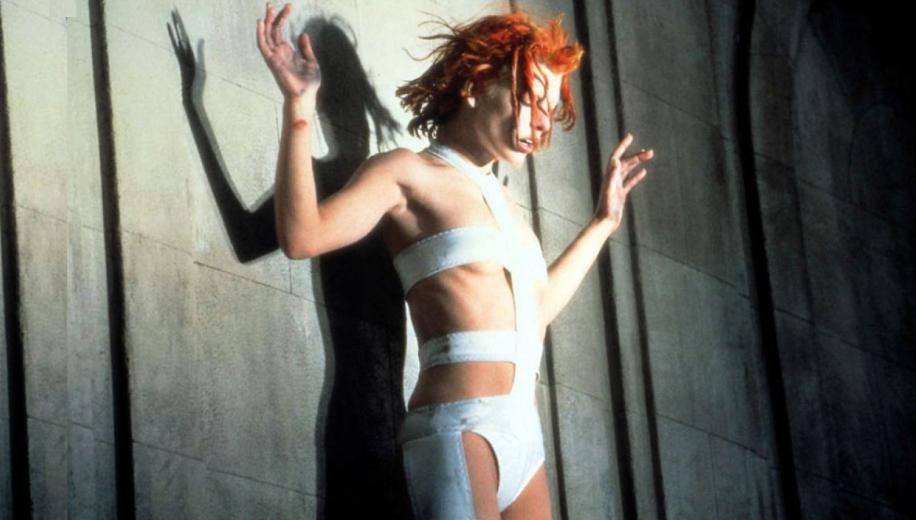 With Luc Besson returning to big screen sci-fi for Valerian and the City of a Thousand Planets, it seems apt to celebrate the 20th anniversary of his sci-fi fan favourite The Fifth Element in proper style.

In the last 20 years filmmaker Luc Besson has written a whopping 40 films, but only directed about half a dozen of them, and it sometimes feels like his quantity-over-quality approach to his screenplays (which are almost all paint-by-numbers re-arranged sets of the same generic pieces ripped from other, better movies) has diluted his art, and left the world largely devoid of films in the vein of Nikita and Leon and this, arguably his last great big screen outing, the sci-fi romp, The Fifth Element. A wonderful - and unique - blend of sci-fi spectacle, comic-book action-adventure, colourful performances and finely-placed humour, it carried Besson's quintessential style and verve, as well as that inimitable continental flavouring and remains one of the very last of his classic gems.
Despite golden era Bruce Willis's iconic John McClane style persona perfectly integrating into the outlandish universe, and Gary Oldman going full Oldman in his over-the-top villainous role, the movie really belongs to Milla Jovovich's child-like, flame-haired kick-ass heroine Leeloo. Despite being distractingly scantily-clad, Jovovich transcends Besson's particular vision and blends innocence, hope, passion and fury into her gorgeous punk role. Besson nails the visuals too, crafting a playful vision of the future, replete with distinctive weapons and aliens that feel like they've been ripped right out of a comic book. Few sci-fi action films manage to mix so many colourful - and outright slapstick - moments in a film that you can still get involved in, but The Fifth Element somehow nails it.

Although not quite as perfect an original film-based example of the format as Leon, it still distinguishes itself as a top tier release, with the 35mm film source remastered in 4K to tremendous effect. Again, it's another great counterbalance to the plethora of 2K Digital Intermediate-limited digital productions of late, giving the film a new lease of life in full 4K.

Detail is staggering right from the get-go, lapping up the intricacies of the desert space-ship landing and alien visitor; the bustling futurescape and the gorgeous space opera. Skin textures are wonderfully and lovingly rendered, and through the barrage of chaos, the increasingly weathered looks afford impressive intricacies and newfound nuances which a direct comparison to the accompanying Blu-ray (identical to the Mastered in 4K Blu-ray from not long back) reveals are at a whole new level. Sure, there are some shots that are clearly softer than others - perhaps a holdover from the source material - but there are more than enough wow moments to keep any AV aficionado grinning from ear-to-ear for the majority of the runtime.

The colour scheme is beautifully vibrant and vivid, further breathing new life into the piece, with HDR and WCG implemented in a strong but natural fashion, allowing the original tones to shine organically, and expanding the spectrum and contrast to give richer blacks and higher peaks. All in all, it's another great film-based Ultra HD Blu-ray release.

The accompanying Dolby Atmos track is framed on an equally reference Dolby TrueHD 7.1 core, which delivers a stunning, engulfing, and veritably immersive mix that draws you into the wacky and colourful sci-fi adventure. It perfectly marries up to the comic-book visuals and arguably even outdoes the excellent 4K video presentation.


The reference audio arguably even outdoes the excellent video

Whilst dialogue remains clearly disseminated throughout, given priority across the frontal array when necessary, it's the score and the effects which stand out, with a punchy, fun score providing the backbone to the proceedings, whilst a stomping spread of effects sweep you up into the manic hovercab street chases, and make you duck for cover during the furious and explosive gun battles. Surround action is relentless during these sequences, and brings plenty of LFE to bear too. It's a spectacular track, demo and reference through and through.

Somewhat curiously, Sony haven't made this a bare-bones Ultra HD Blu-ray disc, but - at the same time - haven't bothered to actually port over all of the extras from the accompanying Blu-ray disc, so you'll still be flipping discs just to watch all the supplements. The Blu-ray - matching up to its Mastered in 4K predecessor - sports a slew of mini-Featurettes covering the cast, the visuals, the aliens, the fashion, and the effects, as well as a trivia track.

The new addition, exclusive to the Ultra HD Blu-ray disc, is a 10 minute retrospective, The Director's Notes: Luc Besson Looks Back, which is a surprisingly meaty affair, packed with fond reflections on the nuances of the production and the details of the filmmakers' famously hands-on approach to every little detail.

Aside from the mainstream Sony US release, there's also a Best Buy exclusive 4K Ultra HD Steelbook Blu-ray release which sports the same divisive Pop Art design that Best Buy's earlier regular Blu-ray had. Those who liked the design (it's certainly one of the better Pop Art designs, but that's not hard) will find it a nice, albeit expensive, collectible alternative. Making for a strange but welcome companion-piece to Besson's Leon, The Fifth Element celebrates its 20th Anniversary in style with this superb Ultra HD Blu-ray release, sporting excellent video and audio and a nice selection of extras including, in a rare move, a new extra exclusive to this release and actually on the Ultra HD Blu-ray disc itself for once. Recommended.