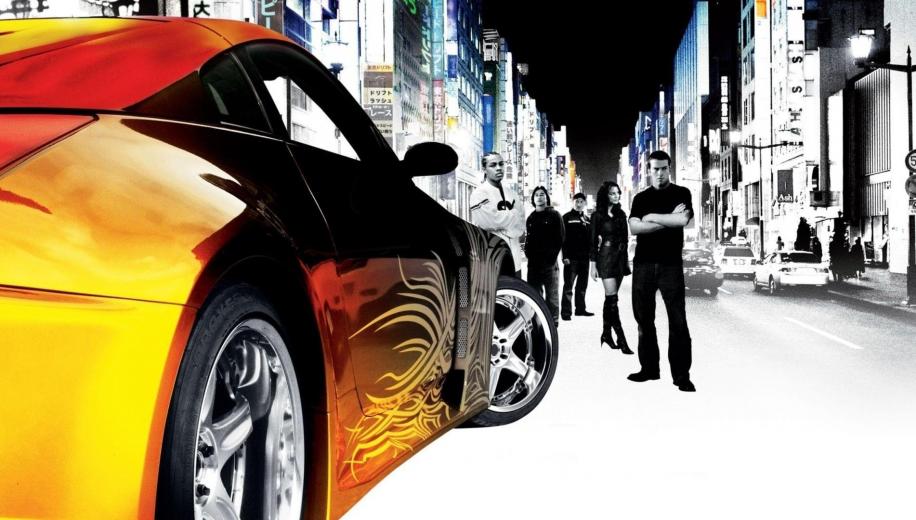 A weaker entry, but an important chapter in the franchise, Tokyo Drift introduced us to director Justin Lin, who would steer the films to unexpected highs.

Presumably because he wasn't all that enamoured with the outcome of the second movie and wanted to take a slightly more serious direction in his career (2006 saw the release of two of the better films in his career, the underrated crime thriller Running Scared and the Clint Eastwood war epic Flags of Our Fathers), Paul Walker didn't return for this second sequel, with a brief cameo secured for Vin Diesel (in exchange for Universal's rights to the Riddick franchise) but otherwise nothing even approaching star power to drive this piece.

Indeed, newcomer Lucas Black's hillbilly protagonist is just one odd choice in the film, which transplants the story to Tokyo to follow his fish-out-of-water racer as he gets involved with drifting-expert racers and Yakuza, including future franchise star, Sung Kang's Han.


Working with a no-star cast has its disadvantages, and there's only so much more gritty, realistic and ultimately better-staged races can get you

Quite a polarising outing, Tokyo Drift marked a departure from the glossy, over-stylised antics of the first two films (there's no speed-effect visuals here, nor any through-the-engine visuals), with newcomer director Justin Lin seeking to make a more grounded affair which actually shows very little of its highest-in-the-franchise-thus-far budget on screen. That's no bad thing, but working with a no-star cast has its disadvantages, and there's only so much more gritty, realistic and ultimately better-staged races can get you.

Lin, of course, would prove the saviour of the series, working with Diesel to take it to another, critically (at least in terms of fan satisfaction) and commercially acclaimed level. But it's debatable whether Tokyo Drift is anything more than a necessary evil, with key events only retrofitted with meaning courtesy of the next 'trilogy' of films, 4-6, being set before this one. The reality is that, without this post-script significance, it could have otherwise been entirely skipped; Lin may have been honing his art at capturing road races, but it's his later entries that really made an impact.

The Fast and the Furious: Tokyo Drift comes to UK Ultra HD Blu-ray courtesy of Universal, who deliver a problematic upscaled 2K rendition of the 2006 second sequel; the first in the series to be limited by a 2K Digital Intermediate, but that's not the end of its woes.


The first in the series to be limited by a 2K Digital Intermediate, but that's not the end of its woes

Firstly, AV fans all know by now that a 2K DI isn't in any way a death knell for a 4K video presentation these days, so it's not that which ultimately sabotages this disc. Unfortunately, the issues appear to be more intrinsic to the processing implemented, with Tokyo Drift easily the softest of all of the Fast and Furious films in 4K; still very pleasant to look at for the most part, but offering the least noticeable upgrade over its Blu-ray counterpart - a shock when some of the other entries (the first two in particular) are head-and-shoulders above their 1080p forebears. It's a shame because there are scenes with detail, but there's as much - if not more - of that waxy-face nonsense going on, which can get a little distracting.

The plus side? WCG and HDR still work their magic. Despite this being the least glossy entry, there are still some nice primary pops, and, by the time you get to the all-important final act (the only bit that most repeat-viewers will need to watch), the problems are hardly a distraction, and the presentation feels actually quite pleasant. It's just a shame that, overall, it could have been so much better.

At least the accompanying High Definition 3D immersive audio track is up to scratch, with this DTS:X offering making up somewhat for any visual limitations, even if it's not quite as engaging as the tracks on the first film.

Dialogue still gets keen prioritisation, predominately across the frontal channels, whilst effects bring the race sequences to life, with plenty of screeching tyres - given the drift-dominance - and some gunshots and explosions to spice things up too. It hardly feels the same scale as the preceding two movies though, and it's hard to think that they spent more on what - at the time - amounted to little more than a straight-to-video sequel.

Brian Tyler (who would go on to score most every subsequent entry apart from 6 and this year's spin-off, Hobbs and Shaw) does his best to engage with his more thematic score, but - much like the director - he doesn't hit his stride until the next entry, nor perfect it until after that, finally establishing themes which were only nascent back here. Nonetheless, the more material the better in terms of giving the track something to play with, and the score rounds out a very good audio track.

Again, it's only the Commentary that gets ported over to the 4K disc

Again, it's only the Audio Commentary, this time from Director Justin Lin, that makes the cut and actually gets ported over to the 4K Ultra HD disc proper, with the remaining extras - a series of Featurettes, some Deleted Scenes, and some Music Videos - on the accompanying Blu-ray disc.

The reality is that, without the post-script significance, it could have otherwise been entirely skipped; Lin may have been honing his art at capturing road races, but it's his later entries that really made an impact

As a box set gets released debuting the 4K upgrades for the missing entries in the series - the fourth and fifth films - we look back at the first three as well, including this weaker entry which doesn't even boast impressive video, although at least it has a strong enough immersive audio mix. At least it comes as part of the package.