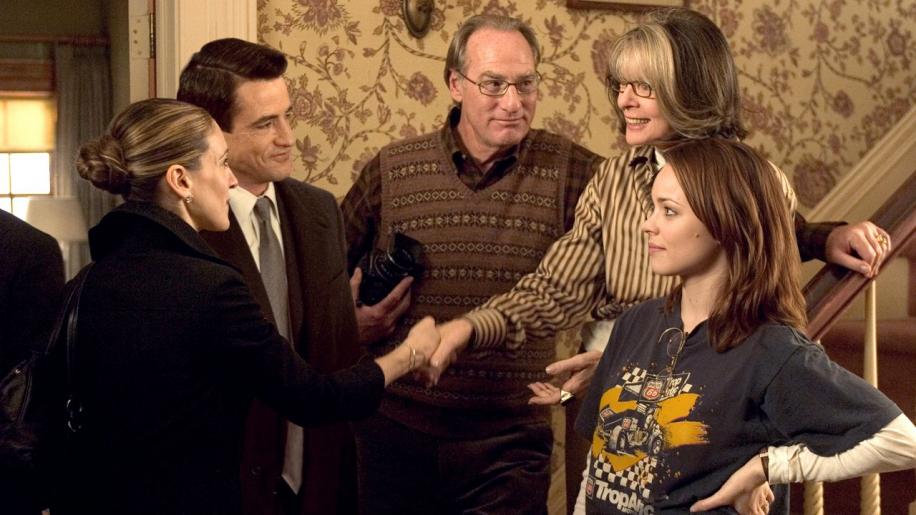 Fox have provided a very serviceable transfer for The Family Stone that, without being too flashy or, perhaps, as sharp as I would have liked, still presents the film with a nice, warm feel that makes a good effort to draw you in. Skin tones and colour palette are fairly on the ball, with no smearing or over-saturation to speak of, and there is a surprising amount of detail on offer, despite the slightly soft 1.85:1 anamorphic image. The Stone household, itself, benefits most from the level of detail, with all of its nick-knacks, clutter and assorted minutia reasonably well-rendered.

There is a nice sense of depth to the image, lending a realistic, lived-in quality to the setting, and a good contrast balance coupled with relatively deep blacks help provide an engaging and homely atmosphere to a film that opts for comfy interiors as its main choice of location.

All in all, a very pleasing and reliable picture. There is a smattering of grain here and there, apparent mainly upon characters' faces for some reason, and some slight edge enhancement, but nothing to spoil or detract from the film. Forget the Dolby Digital 5.1 that this disc purports to possess, because surround sound this isn't. Arranged only across the frontal array, the mix for The Family Stone doesn't even make much of an impact within that limited range. But then, arguably, it doesn't need to. Primarily a dialogue-based film, the use of aural dynamics is uncalled for, and the delivery of the speech and the score is certainly clear and robust enough for the type of cosy, intimate atmosphere that Bezucha intended for his movie. Only occasionally do we get some steerage across the front, such as when the family scurry away from the windows after a group-session spying on Meredith, but there really isn't much directionality displayed.

However, it is worth mentioning that there is a nice subtle effect of the winter wind whistling around Craig T. Nelson and Luke Wilson as they sit chatting outside, that does reach around the rear speakers, albeit in a somewhat gentle manner. As I have said though, The Family Stone does not actually require much beyond the capacity for crisp and clear dialogue, which it does deliver. What looks, at first glance, to be a well-stocked disc is sadly soon revealed to have nothing more than just heaps of fuzzy, cuddly extras of the back-slappingly cringe-worthy variety. And, to be honest, it was a real chore wading through such saccharine overkill.

First up are the two commentary tracks - one from stars Sarah Jessica Parker and Dermot Mulroney, and the other a group-fest from director Bezucha, producer Michael London, editor Jeffrey Ford and production designer Ann Stewart. Both of which add absolutely nothing of value to the film itself, being built from just good-natured banter, half-giggled recollection and tedious, barely interesting production trivia. Now, I am a big fan of chat tracks, and I really do find it a buzz to sit and watch a film alongside the people that made it, but these two yawn-a-thons were almost too excruciating to bear - especially the one from the actors. Parker just acts like a schoolgirl, laughing and tittering the whole time, and Mulroney doesn't appear to have a clue what makes good, informative and entertaining commentary. It is all well and good for the speakers to be having a fine old time of it, but they need to remember to bring us along for the ride, too. Folks, I gave up with the chat from the stars - both of whom have been making movies for years, yet act like this was the first time they'd seen themselves on screen. Pitiful. And the commentary from the makers doesn't fare much better, either. I hate sounding like a killjoy, but these people are just too damn upbeat and ebullient to be entertaining to anyone other than themselves. It's a sorry state of affairs when you actually respond more keenly to talk of set-dressing and camera angles than you do to anecdote. Don't waste your time, unless you are a giggly schoolgirl - in which case you and Parker are soul mates.

And, I'm afraid, things don't improve with the rest of the package, either. This set of features is produced purely with shallow whimsy in mind. Okay, the film is hardly a deep analysis of personalities and how they can clash and complement beyond anything other than the superficial, but bolstering the disc with such lame padding as the two Fox Movie Channel featurettes - one covering the casting of the film in Casting Session (8.02 mins) and the other just an enthusiastic fawn-fest on the red carpet at the film's World Premier (6.05mins) that both contain more clips from the film than anything else even remotely interesting - is just insulting. Likewise the banal and soulless Behind The Scenes featurette (17.51 mins)which reveals nothing about the making of the film beyond how “in-character” Diane Keaton liked to be. Again, there is far too much footage from the film liberally interspersed throughout this to illustrate the rather blatant plot and character elements that the cast and crew are referring to. After sitting through this stuff you will genuinely feel as though all you've done is watched the movie all over again. Lazy promotional fluff ... and nothing more. And the whole thing is so damn “twee” as to be positively nauseating.

Then we get the Deleted Scenes. There are six of them in all, and with a Play All option, they last for 5.37 mins. Don't get your hopes up for anything special here, though, as they are all merely scene extensions. We also have an optional commentary from Bezucha and editor Ford.

The Q&A Session with the cast at the Screen Actors Guild Theatre is 7.58 mins of pure fun and frivolity. On hand to make playful stabs at one another are most of the cast, but the whole forum lapses into backslapping, promotional showboating despite how engaging some of the contributors are. Rachel McAdams looks quite radically different with blonde hair.

The Gag Reel (5.46 mins) reveals the entire ensemble to be just as giggly as Sarah Jessica Parker, as they fluff lines, hit the wrong mark or just ad-lib seemingly for the hell of it. For my sins, I actually found that I enjoyed this. But then I'm a big fan of It'll Be Alright On The Night and shows of that ilk, so actors making a hash of things gets a thumbs up from me every time.

Then we have Meredith's Strata - A Morton Family Tradition. This is just a few colourful pages detailing the recipe for the doomed delicacy from the film.

Besides a cluster of trailers, including teasers and full theatrical trailer for The Family Stone, there are also apparently a couple of Easter Eggs secreted about the disc as well, but as yet, I have not discovered them. Whilst I did enjoy the film, it was also a completely contrived and all-too-obvious rom-com that ticked all the relevant boxes, despite having characters who, on the surface at least, appeared to be a little different. It's true that the sentiment does take priority over the hilarity, but the actors really seem to be having a ball throughout the various situations they find themselves in. Light, disposable fun, and forgotten the minute it is over, The Family Stone, nevertheless, gets along by being colourful, snappy and performed by professionals just having a breeze. But it is never quite as clever, nor as funny as it seems to want to be.

Fox's disc is packed with disappointing extras, too. Do not confuse quantity with quality. There is dross here and no mistake. Overall though, The Family Stone is a relatively entertaining diversion.