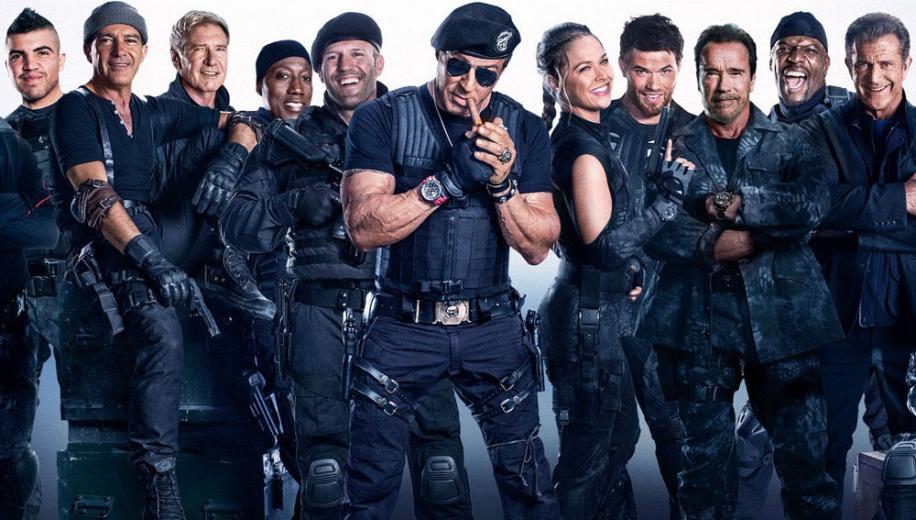 The concept behind The Expendables is a great one – get all the biggest action heroes from the 80s and 90s and bring them together in a single film.

In fact the first Expendables film largely made good on that promise, assembling an impressive group of ageing action stars, to create the best 80s action movie never made. It was violent and bloody with a bit of strong language thrown in for good measure, just like any decent action film back in the 80s. The sequel raised the game still further, bringing in Chuck Norris and Jean-Claude Van Damme but also giving Bruce Willis and Arnold Schwarzenegger more screen time. It was equally as violent and bloody, with a 72 year old Norris laying waste to hundreds of extras. Suddenly appearing in The Expendables was a desirable gig for any ageing action star looking for a meaty role and a decent pay cheque. Bruce Willis got a bit too greedy when it came to the pay cheque though, so he has been replaced by Harrison Ford in this latest outing (cue a great in-joke at Willis's expense) but the addition of Wesley Snipes, Antonio Banderas and Mel Gibson as the main villain certainly bodes well.
Sadly The Expendables 3 largely disappoints, partly because the producers decided to go for an inappropriate PG-13 rating and partly because too much of the action involves a bunch of much younger unknown action wannabes. After a promising start – mainly thanks to an almost-back-to-his-best Wesley Snipes – things soon derail into a tedious middle act where we are introduced to each and every one of a series of increasingly young and dull new recruits, before they go on a mission to capture a scenery chewing Mel Gibson. This is a shame as the film starts well, both Snipes and Gibson are on top form and Banderas is, at times, hysterical. It just isn't enough and even the addition of gallons of CG blood in the extended cut doesn't help matters. It's a simple formula, just get a bunch of ageing action heroes together, then add a nasty villain and plenty of brutal violence. Let's hope that if there is an Expendables 4 it sticks to the established brand. The Expendables 3 was filmed digitally using the RED Epic Dragon at a resolution of 5K and it was finished using a 4K Digital Intermediate (DI), which presumably formed the basis for this Ultra HD Blu-ray release. The film is presented using a 3840 x 2160p transfer in the film's correct 2.40:1 aspect ratio, the disc uses 10-bit colour depth, a Wider Colour Gamut (WCG) and High Dynamic Range (HDR), and is encoded using the HEVC (H.265) codec. We are reviewing the US Ultra HD Blu-ray release of The Expendables 3, the disc has yet to be released in the UK. Our review kit consists of a Samsung UE65KS9500 Ultra HD TV and a Samsung UBD-K8500 Ultra HD Blu-ray player.

First the good aspects of this new Ultra HD transfer of the film's theatrical cut. The 5K capture and 4K DI mean that the image is brimming with fine detail, probably a bit too much detail in the case of the film's ageing stars, with lines, pores and plastic surgery scars being all too obvious at times. In a direct comparison with the included Blu-ray, there is definitely more detail evident on the Ultra HD Blu-ray, with landscapes, clothing, weapons and close-ups all appearing more realistic. Unfortunately this does mean some of the effects sequences look a little less realistic now but overall the resolution on the UHD Blu-ray is impressive. The colour gamut is also wider, giving certain scenes a nicely saturated look and others a lovely natural appearance.

Unfortunately Lionsgate have seriously messed up the HDR grade on this release and blacks appear a dark grey, instead of the deep inky colour we would expect from an HDR image. What exactly has gone wrong is hard to say but it could be that the metadata has been encoded incorrectly and the image isn't being tone mapped properly by any of the displays on which we watched the disc. Alternatively it could be that the video levels are set incorrectly or the wrong PQ EOTF was used for the transfer. The idea behind HDR is to use an EOTF (Electro-Optical Transfer Function or gamma as it's otherwise known) that best simulates how the human eye actually perceives light. This PQ (Perceptual Quantisation) EOTF establishes how the digital signal is converted into luminance, delivering not just deeper blacks and brighter highlights but also more detail in both. One look at the black bars on this letterboxed image and you're instantly aware that something is not right and a direct comparison to the Blu-ray reveals the depth of the problem. Quite how this happened or how it got past Lionsgate's quality control is unclear but they really need to address this issue immediately. The Expendables 3 was released theatrically in a number of audio formats including both Dolby Atmos and Auro 11.1. The Ultra HD Blu-ray uses the same Dolby Atmos soundtrack that was included on the original Blu-ray release. At the time it was one of the first Dolby Atmos releases, Lionsgate are often one of the first with new formats, and the soundtrack was then, and remains now, an absolute barnstormer. The extensive effects are well-dispersed throughout the film, which doesn't include many quieter moments, creating a highly immersive experience. The action sequences naturally deliver the goods, from the thunderous opening train attack – complete with room-shaking gunfire and helicopters whipping overhead – all the way through to the tank battle finale. By the end of it all, the superb sound design and overwhelming LFE input will have levelled your living room!

The overhead speakers available with Dolby Atmos are used to their full effect, in fact the opening shot involving a train going over the camera is combined with the sounds of the wheels on the rails going directly over your head. From then on the sound designers make full use of the greater freedom afforded them by Atmos, panning effects seamlessly through a three-dimensional soundscape. Gunfire, explosions, cars and helicopters move all around the room and, thanks to the overhead channels, there is a palpable sense of immersion. The numerous sound effects are easy to pinpoint, whilst pans around the room feel completely natural. The level of bass energy is also very impressive but everything still feels balanced and dialogue is always clear. Whilst sound designers are still learning how best to use immersive audio, on The Expendables 3 they have certainly taken advantage of Dolby Atmos in a creative manner.

The Expendables 3 Documentary (HD, 51:56) – This surprisingly extensive documentary is a fun look at the film's production, with interviews with all the cast and crew and extensive behind-the-scenes footage. The documentary covers the characters and storyline, as well as an in-depth look at the action scenes and stunt work. It certainly looks as though everyone had a great time filming The Expendables 3, even if not everyone had such a great time watching it.

New Blood: Stacked and Jacked (HD, 16:11) – This shorter featurette covers some of the same material as the main documentary but obviously concentrates on the younger additions to the cast.

The Total Action Package (HD, 06:40) – This bonus short featurette concentrates on the stunts and visual effects used in the film. It's interesting but given it's length, it might have been better integrated into the main documentary.

Gag Reel (HD, 05:41) – The usual clowning around on set with faulty props and fluffed lines. As in the main documentary, it looks like everyone had a blast making the film.

Extended Scene: Christmas runs the Gauntlet (HD, 02:46) – In this extended scene we see Jason Statham's Lee Christmas efficiently take out an entire army of bad guys. It's a fun scene that should probably have been included in the extended cut. The Expendables 3 is the latest in the franchise that reunites ageing action stars from the 80s and 90s, marrying modern filmmaking techniques with a more old-school sensibility. The two previous instalments boasted all-star casts and plenty of bloody violence, maintaining that combination of an 80s aesthetic with up-to-date stunts and effects. Despite having a cast that includes Sylvester Stallone, Wesley Snipes, Harrison Ford and Mel Gibson, the third film in the franchise manages to sideline the older stars in favour of a group of younger wannabes. If that wasn't bad enough, the filmmakers also take the disastrous decision to tone down the violence in favour of a PG-13 rating, which suggests they really don't understand their own franchise. Ultimately The Expendables 3 is enjoyable in parts but it could have been so much more.


A fun film, great sound and a decent set of extras are all let down by HDR that needs to addressed

If the film itself is a disappointment, then so is this Ultra HD Blu-ray release. What should have been a slam-dunk on paper is let down by the disastrous implementation of the HDR that adorns this disc. That's a real shame because the film was finished at a resolution of 4K, which is apparent when you compare the Ultra HD Blu-ray to the regular disc that's included in the package. However despite the amazing levels of detail and the wider colour gamut, the grey blacks just ruin everything. Until Lionsgate address this problem, you're better off watching the Blu-ray of The Expendables 3, it has great blacks, the same thunderous Dolby Atmos soundtrack and a decent set of extras.