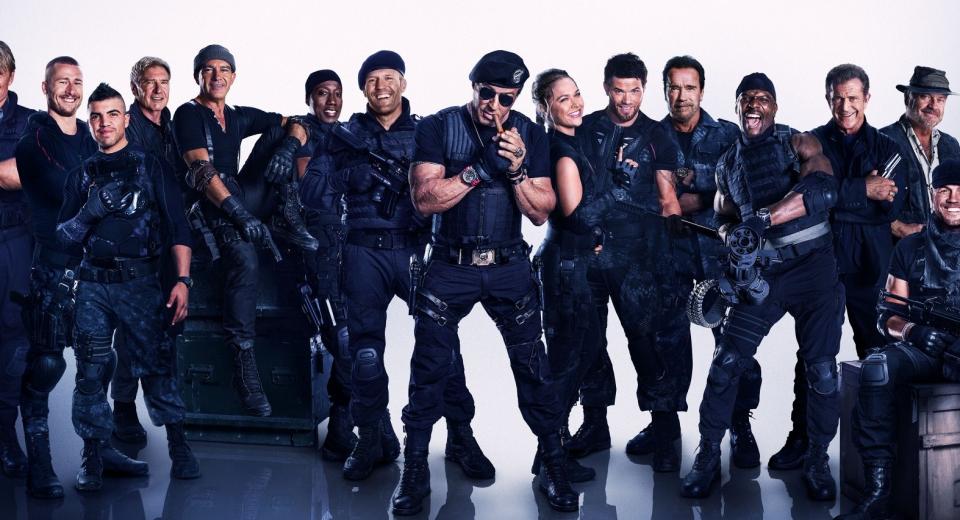 Back when the first Expendables movie came out, I had great expectations. Following the impressive return to form Stallone had shown in his latter Rocky and Rambo sequels, I expected a gritty, modern Dirty Dozen-esque outing with an ensemble cast. To date, I don’t feel that Stallone has made good on that promise.

Unfortunately, despite a promising start – mainly thanks to an almost-back-on-form Wesley Snipes – things soon derail into out-with-the-old-in-with-the-new territory, leading to an, at times, tedious middle act where we are introduced to each and every one of a series of dull as lead new recruits, before they go on a mission to capture a scenery chewing Mel Gibson (also back on form).

It’s not until the final act where things pick up steam, but even then, frenetic shaky-cam and the restrictive rating – coupled with the sheer fact that there are simply too many participants in one big orgy of a fight sequence – give the action a diluted feel, even in its CG-blood-laden ‘Extended’ Cut. And, unfortunately, without enough decent action, and without enough screentime for the old crew, the two biggest reasons why you go to watch these movies are simply left unfulfilled.
Don’t get me wrong, there’s still some fun to be had in this outing; Gibson's got a couple of good moments, Snipes has a nice introduction, Banderas is a hoot, the action – particularly Stallone’s contribution – is not utterly devoid of impact; and the end result still offers some satisfaction, but we’re still a way from getting The Wild Bunch of 80s throwback action.

Personally, I’d have loved to have seen the Expendables tale where Stallone and his team went to take down Gibson’s character when he first went rogue (now that sounds like a proper Expendables story) but, instead, this series is veering more and more in the direction of Expendables-lite and, unless Stallone takes back control, will likely only continue down that sorry road. Expendables was a fairly low budget affair, and was largely forgiven its distinctly mediocre video presentation, but the first sequel had no such excuses and boasted one of the most frustratingly – and distractingly – poor video presentations that have adorned a relative mainstream new release in recent years. Thankfully, for all its other faults, Expendables 3 has no such flaws, and looks much more impressive, standing proud and tall alongside its bigger budget summer blockbuster brethren, and proving no less striking.


One vast improvement over the first two chapters comes on the AV front, with a striking presentation offered up here.

Detail is excellent throughout, with strong fine object work, close-ups, skin textures, clothing weaves and background flourishes. The precise Red Epic digital shots boast none of the distracting noise issues that plagued the last movie’s release, and instead offer up superior clarity even through the frenetic action sequences. The colour scheme has alternating sepia and blue-dominated sequences, but skin tones are healthy and black levels are deep and rich, affording us some surprisingly strong shadow detail even during the darker sequences. Whilst not quite perfect - some of the few more extensively CG-dominated moments look a little soft - this is the first Expendables release that’s easily stepped up to the demo quality plate. One of the first few titles to boast the new Dolby Atmos label, most will still be making the most of the Dolby TrueHD 7.1 core instead, which is pretty damn impressive in and of itself. With clear and coherent dialogue disseminated across the frontal array with dominance above the rest of the track’s elements, the audio is off to a great start.

Effects are well-represented throughout the piece, which does not really afford all that many quieter moments, but still brings us strong atmospherics even in the few that we do get. The action sequences, of course, deliver what you really came here for, from the thunderous opening train sequence – complete with room-shaking gunfire and helicopters whipping overhead – all the way through to the tank-tastic finale. By the end of it all, the excellent surround work and overwhelming LFE input is almost guaranteed to level your living room.


None of the Expendables entries have ever had any real issues on the audio front, and this second sequel is no exception.

Additional Dolby Atmos audio review from Steve Withers: The Expendables III is the second Blu-ray release, after Transformers: Age of Extinction, to included a Dolby Atmos soundtrack. We reviewed this Blu-ray with a 7.1.4 Dolby Atmos configuration, which meant that along with the usual seven channels and subwoofer, we had four overhead channels - two at the front and two at the rear. To achieve this we used a Denon AVR-X5200 AV receiver combined with a Cambridge Audio Azur 651W power amplifier to add the extra two channels. The results were even more impressive than they had been with Transformers: Age of Extinction, with the filmmakers setting their stall out right from the start.

In fact the first shot involves a train going over the camera and the sounds of the wheels on the rails go directly over your head - very effective. From then on it's business as usual with gunfire, explosions, cars and helicopters flying all around the room and, thanks to the overhead channels, there is a palpable sense of immersion. The numerous sound effects are easy to pinpoint, whilst pans around the room feel completely seamless. The level of bass energy is also very impressive but everything still feels balanced and dialogue is always clear. Whilst it's still early days for the new format, it would appear the sound designers are getting better at mixing the overhead channels and making them part of the film rather than just a distraction.

Matching up to the US counterpart, we not only get both versions of the movie, we also get all of the extras. Whilst it’s not a comprehensive selection, there’s plenty on offer, with a near-hour-long Documentary, a 16 minute Featurette on the new cast members in New Blood: Stacked and Jacked, a 7-minute look at the action sequences in The Total Action Package, a fun 6-minute Gag Reel which reminds us at least that the cast were having a blast putting this together, and a single, lonely Extended action sequence – Christmas Runs the Gauntlet. Even the Extended Cut - complete with its added CG blood - doesn't take this even vaguely close to the levels fans expect from an Expendables outing. And it certainly doesn't come close to fixing the other issues that the movie has, with story and script, and a bunch of new fools filling the boots of the old actors that you came to see. Hopefully Stallone will learn with the next one. After all, fourth time's a charm...


They still haven't nailed the formula here, which is a shame when it should be pretty simple: The Dirty Dozen for 80s action heroes. Not The PG-13 Two-Dozen for modern UFC nobodies.

At least the video and audio are up to scratch - a first for the series in terms of video at least - and the two cuts and decent extras provide fans with a solid package to pick up. If you halfway enjoyed the first movie then you'll probably want to check out the extended cut, but if you weren't interested in owning the theatrical version then this longer cut isn't likely to change that opinion.