Fans would have probably lapped up another five seasons of this. 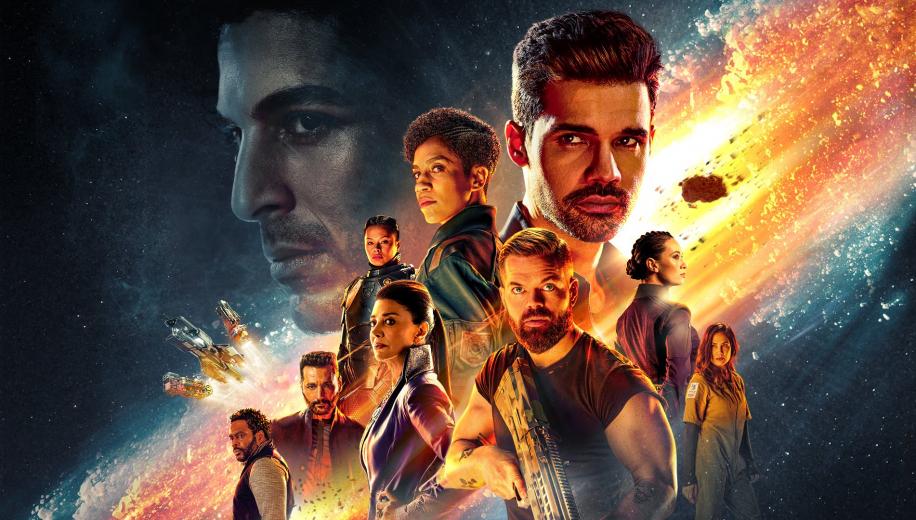 Amazon's best show, the slice of hard science fiction excellence that is The Expanse, reaches its explosive penultimate season.

The Expanse didn't hit the ground running as an unmissable bit of top tier hard sci-fi, taking almost its entire first season just to get into a stride and, even then, not really expanding to reveal anything more than palpable potential until halfway through the second season. Yet it was some kind of a miracle that, facing cancellation in its third, tremendous, year, Amazon picked it up and renewed it. We've since had a superb fourth year which explored the now even more expanded universe that the narrative has exposed, which has left the Earthers, Belters and Martians - having briefly come together to investigate the mysterious ring portals that have allowed them access to the farthest reaches of the universe - now on the precipice of an insurgent-incited war on an unprecedented scale.

Boasting the best effects the series has seen, seamlessly exploring colonies, vessels and future-tech, it's great to have The Expanse back

Having averted war a couple of times now, the celebrated crew of the Rocinante are once again separated by circumstance. Amos has some loose ends back in Baltimore, expecting to raise a fair amount of animosity back there; the Martian pilot, Alex, wants to reconnect with his estranged son; and Earther Captain Holden and his partner and engineer, Belter Naomi, have to deal with the revelation that Naomi had a child with the recently revealed terrorist Marcos Inaros, with her as keen on finding her long-lost son as Holden is on figuring out what the Belter extremists want with the protomolecule. All the while, the stealth tech-cloaked asteroids that Marcos has weaponised streak across the galaxy towards their intended targets.

The Expanse has always slow-burned its tale of mysterious, seemingly unrelated happenings across a colourful space sandbox (kind-of like a hard science fiction Game of Thrones) which eventually come together with often shocking results, dancing past all-out war on several occasions. Even its fourth season started relatively small, settling on a new planet to expound a narrative whose ultimate impact would be felt across the far reaches of this universe. But after the almost cliffhanger ending of season 4, it's no surprise to find that this new series has a clearly defined path of destruction to follow.

Frustratingly, once again only dropping three episodes (in 4K HDR, if you can find it - one option is to select the 4K Season 4 and scroll past the last episode to the available 4K episodes of Season 5, because a search, at least at midnight when it dropped, yielded no helpful results), Amazon's best property is still clearly on a mission this year. With but one final, sixth season announced to close up all the loose ends, there's a whole lot of story that needs to be told, starting with the universe-shaking plan that terrorist Marcos Inaros is putting into action in a bid to help the Belters claim their position at the forefront of these realms. It's a plot whose impact isn't felt until the very end of these three episodes, so the advice would be to a) avoid watching the trailer, which goes way beyond what Amazon have dropped here and b) maybe wait until the whole season has landed. Because this is setting up to be an epic and eminently binge-worthy year.

And, despite a clearer sense of structure, The Expanse still finds time for its smaller stories, which are arguably just as interesting as its universe-shaking threats. Watching Wes Chatham's Amos head back to his dark roots on the dirty streets of Baltimore, Earth, could have almost been justifiable fuel for an entire spin-off show. Few Expanse fans wouldn't be happy to watch Amos do just about anything, with easily the best character and certainly the best lines, dispatched with a cool, dispassionate psychotic twinge coupled with a strange sense of innate loyalty and unflinching inner code of conduct. That the show, threatening the apocalypse from weaponised asteroids, makes time for Amos's backstory is a testament to just how strong this property has become.

If they nail this year, maybe they have a shot at sticking the landing with the final season, and rounding out one of the best sci-fi TV shows of all time

On the other end of this universe, Cara Gee's Belter commander has also come into her own, as arguably the second most interesting character (although David Strathairn is sorely missed), who faces her own tough choices when faced with the actions of arguably one of her own - the belter terrorist - and with the fact that her earlier decision to spare him could have cost countless lives, including those very close to her.

Holden's bonding with the alien/protomolecule/Miller is teased across the first few episodes, but his investigation into the potential plot to steal the Protomolecule is pleasantly reminiscent of Miller's path in the first season, a welcome parallel which further shows just how mature and confident this show has become. And dammit if Frankie Adams' musclebound Martian warrior isn't still a whole lot of awesome, continuing her dangerous work undercover in a plot that's undoubtedly going to cut right to the core of this year's narrative.

Boasting the best effects the series has ever seen, seamlessly exploring colonies, vessels and future-tech, it's great to have The Expanse back, for what could turn out to be the best season yet. It's going to be a long wait for each weekly episode, but if they nail this year, maybe they have a shot at sticking the landing with the final season, and rounding out one of the best sci-fi TV shows of all time.