Game of Thrones... in space 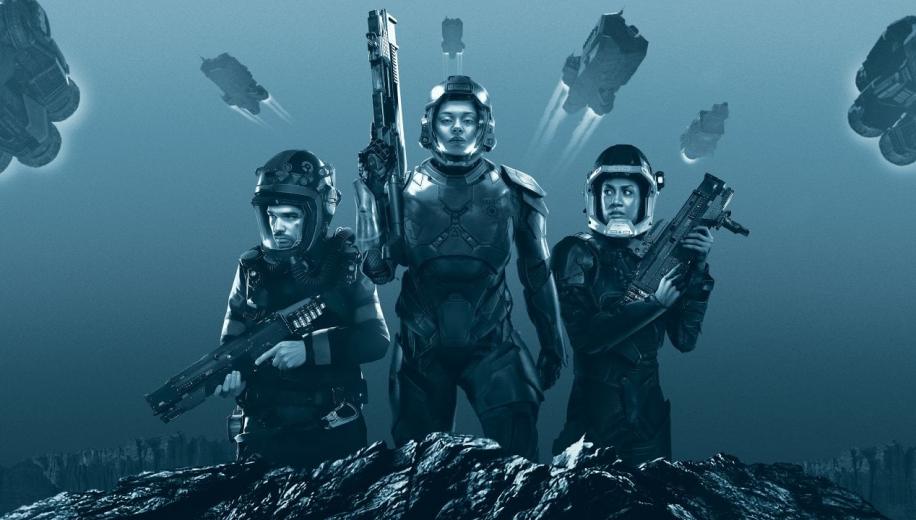 The Expanse has the potential to be sci-fi's answer to Game of Thrones, hitting its stride in season 3 for a frequently epic ride.

One of the best sci-fi shows since the reimagined Battlestar Galactica, Syfy's cancelled-then-resurrected event show, The Expanse, has found a new home on Amazon Prime Video, where it will hopefully play out the rest of its story which - much like Game of Thrones - is largely based on an extensive series of novels which also have yet to be completed.

A missing girl. A dogged police detective determined to find out what happened to her. A small ship's crew who witness a tragedy that threatens to trigger a war. Alien contact and a protomolecule that combines with your DNA. And a conspiracy reaching throughout the system. The Expanse takes these core components and sets them all on a crash collision course, introducing dozens of different characters as it sweeps across the solar system and draws you into a wonderful sci-fi sandbox.


It may have started off as a small-scale, slow-building show, but it eventually, undeniably, proved more than worthy of its name

For newcomers to the series, it's best starting back at the beginning - obviously - with the caveat that this isn't a fast paced show; it's a slow-building, initially almost small-scale (despite the wide setting of an entire colonised solar system) hard sci-fi show which adds layers upon layers until you're eventually hooked, leaving you with a tantalising spin into a second season. This, rather than offering answers, only drew you further into the rabbit-hole, expanding the mystery and scope before detonating a system-wide series of events involving alien tech and a potential war between the 'Earthers' and their Mars colonist counterparts, with the 'Belters' on the asteroid belt only stoking the flames. It may have started off as a small-scale, slow-building show, but it eventually, undeniably, proved more than worthy of its name. Season 3 - the last season commissioned by Syfy before they cancelled the show - has just been released on Amazon Prime Video in the UK, following the company's decision to renew it. Although it looks like we only appear to get it in 1080p in the UK, as is the norm for Amazon, they actually hide the content so it is almost impossible to find (kind forum members have suggested a search for 'The Expanse 4K' will do it), and although the show still looks tremendous in 1080p, it's even better in UHD, particularly since this is easily The Expanse's best looking series visually, looking like it blew most of its budget with its opening episode's Mission: Impossible - Ghost Protocol-style scaling sequence, but still leaving plenty for some exciting skirmishes across the rest of the piece.

The shorter 10-episode first season was really just testing the waters, whilst the second expanded the scope and teased you with ideas and elements which eventually came together into a cohesive whole, but only as the season came to the end of its longer 13-episode run. But Season 3, right from the opening episode, knows exactly where it is going, and only really falls down when it tries to fool you into believing otherwise.

The premise for this third season is simple enough: as Earth and Mars face off, the former crew of the Canterbury - in their stolen Martian stealth ship, the Rocinante - cross paths with the one person who may be able to stop an all-out war, painting a target on their heads from both sides in the process. However, there's much more going on behind this tagline, with the scheming 'Belters busily plotting in the background, the nefarious scientists continuing their experiments weaponising the protomolecule, and even the crew themselves torn over what part they play in this far-reaching chess game. And clearly we haven't seen the last of the Miller/Julie melding that saw Venus transformed by the protomolecule, although what part will they play in the ever-expanding chaos?

There's plenty of Game of Thrones-style ideas that define The Expanse, not least in its successful ability to create a huge sandbox universe of characters, factions, monsters, politics, and violent conflict. From the blue demons that threaten everybody, to the splinter groups that are not trusted by either parties, to the divide between two different sides of one human race, and the further wars within each of those disparate sides - The Expanse manages to play out a fantastic core narrative thread that interlocks hundreds of intricate moving parts in a well-oiled, moving machine of a show.

Not all of the characters gel, with the ship's crew still a bit of a hodgepodge led by the permanently dour poor man's Josh Harnett, Steven Strait, as the Captain, who is supported by Dominique Tipper's engineer, Cas Anvar's (easily the weakest actor and most inconsistent character) pilot, and Wes Chatham's mechanic-cum-killing machine (easily the best played and most interesting character - almost like a tactically-trained clinical psychopath, who gets all the best lines). Added into the mix are Shohreh Aghdashloo as seemingly the only decent politician, Shawn Doyle as her suitably nefarious counterpart, heavily involved in the conspiracy, and a martian marine (not wholly incomparable to GoT's amazonian knight, Brienne) played to bolshy perfection by Frankie Adams.

There are at least two dozen more players who more than deserve a mention, but The Expanse is at its best when it effortlessly moves the pieces around the board almost without you needing to know the names and numbers of all those involved, able to deliver resounding narrative impacts with plot development, turning an outgunned seek-and-destroy chase sequence into a series of examples of tactical genius; a pre-emptive nuclear strike into a political minefield; and a simple quest to find a missing daughter into a further key to unlocking the door that leads yet deeper into the conspiracy involving weaponised alien protomolecules.

It's tremendous world-building, and some of the best sci-fi on TV - Syfy's (and indeed Netflix's) loss is Amazon's gain and with Amazon founder and president Jeff Bezos personally a fan of the books, hopefully they will see this one through to a glorious, as yet unwritten, end. Highly recommended.