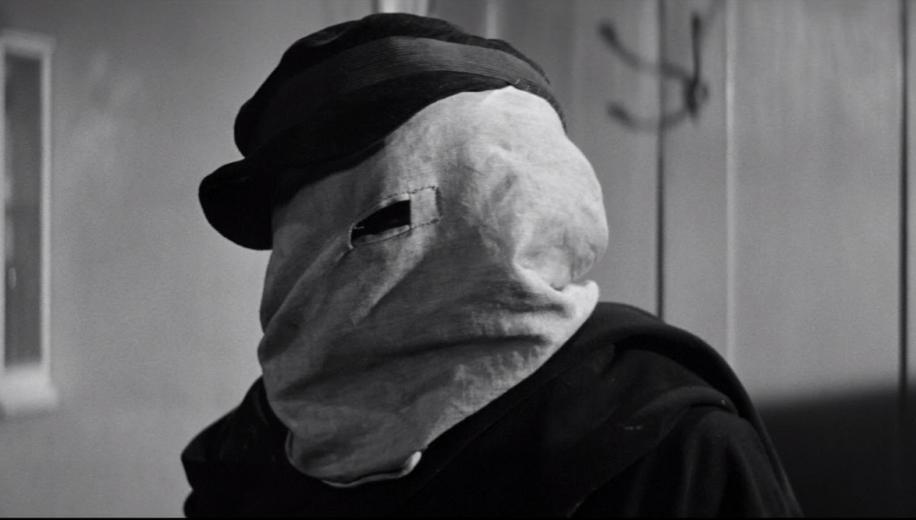 If you ask my opinion, he is only being stared at all over again.

The Elephant Man tells the story of Joseph Merrick (erroneously called John in the film), a poor unfortunate who was born with, and grew into, the most unbelievable deformities which meant his life was short and somewhat tragic. As with all biopic films the truth never gets in the way of a good story, and The Elephant Man is no exception; choosing to focus on truthful aspects that occurred during his lifetime, but paying scant heed to the order and adding in complete fictions, the story, nevertheless, becomes a timeless study of human dignity, when the heart of the unfortunate proves to be bigger than any deformity.

A timeless study of human dignity

To hear the producer talk about how the film come together, there is an element of serendipity, but more than that, all the elements formed a perfect whole. The writer's story, combined with director David Lynch’s vision, Freddie Francis evocative black and white cinematography, John Morris’ magical score, Christopher Tucker’s stunning make-up and above all John Hurt’s humanity at acting the part through all those prosthetics, makes the experience emotional and enthralling. Perhaps Lynch’s most accessible film (save the dream sequences, it is his most linear) it remains, just like all of his output, once seen, unforgettable.

The Elephant Man was shot using Panavision Cameras on 35mm film, and for this 40th year anniversary the original camera negative been scanned at 4K resolution using the latest HDR 16bit workflow, under the supervision of director David Lynch, who personally curated the colour correction. The disc presents a native 3840 x 2160p resolution image in the widescreen 2.35:1 aspect ratio, and uses 10-bit video depth, High Dynamic Range, and is encoded using the HEVC (H.265) codec with Dolby Vision too. We reviewed the Region free UK Ultra HD Blu-ray release of The Elephant Man on a Panasonic 65DX902B Ultra HD 4K TV with a Panasonic DMP-UB400 Ultra HD Blu-ray player.

The greyscale is tremendous

The new scan has brought out some wonderful textural details throughout the image: pores, hair lines, reflections in eyes, tight clothing weaves, ornate carvings in Merrick’s gentlemen’s grooming kit, being able to tell the time on Mothershead’s watch, the definition of the cobbled streets, the dirt and grime on the same; simply pristine.

The greyscale is tremendous, showing some lovely shadow detail – when Treve’s first meets Merrick in the dark hovel, for example – but there is a depth to frame that is amazing with true defiant blacks, while the white end picks out highlights giving the occasional 3D pop.

The source is clean, though stock film does look a tad worse, and while there are no compression issues, grain can, occasionally, have an issue – the opening scene, plus any time there is smoke or steam on screen there is some unpleasant looking crawling and blocking, but these are minor distractions in what is an otherwise stunning picture.
﻿

The English DTS-HD MA 2.0 stereo track fits very well with the visuals; it is well separated with a tremendous dynamic range. There are numerous stereo effects, from tricking water to the right while dialogue remains central, to ambient effects of crowds and street hustle and bustle. Bass is well catered for with some tremendous sub effects, be it the elephants or the workhouse machinery or the floor shaking winding of the bell-tower just before the chimes.

Dialogue is kept central, sounds very natural and is always clear and precise. The mix is well layered with clear definition between the wonderful and evocative score, effects and dialogue.

The supplementary features are spread over the both UHD and Blu-ray discs, we were, unfortunately this time, not supplied with the Blu-ray, so the extras are just listed, providing both old and new content.

Both old and new

Interview with still photographer Frank Connor – A half hour chat with the celebrated photographer who tells of his time on the film and gives plenty of insights into the making of feature films from a unique perspective.

BFI Q&A with Producer Jonathan Sanger – Another 30 minutes with Sanger telling how the film came about, and how serendipity played a huge part in its production. Filmed as part of the celebration of John Hurt at the BFI in 2018.

The Air is on Fire: Interview with David Lynch at Cartier Foundation

Behind the Scenes Still Gallery

The Elephant Man is David Lynch’s retelling of the true life of Joseph Merrick, a poor soul who was born with and grew into the most unfortunate deformities. Like all films based on real people, it takes certain liberties with the truth to make for a more dramatic narrative, but the end result is a study in dignity that is emotional, enthralling and above all unforgettable.

As a 4K UHD set, the anniversary package from Studiocanal is sensational; the native 4K image is awash with detail and keen edges, while the greyscale gives a tremendous look with pitch blacks and luminous whites, while the DTS-HD MA stereo track is wide, layered with clear dialogue and strong bass. The supplementary material, along with the packaging, are fully rounded making this a tremendous buy.