The Dukes Of Hazzard DVD Review 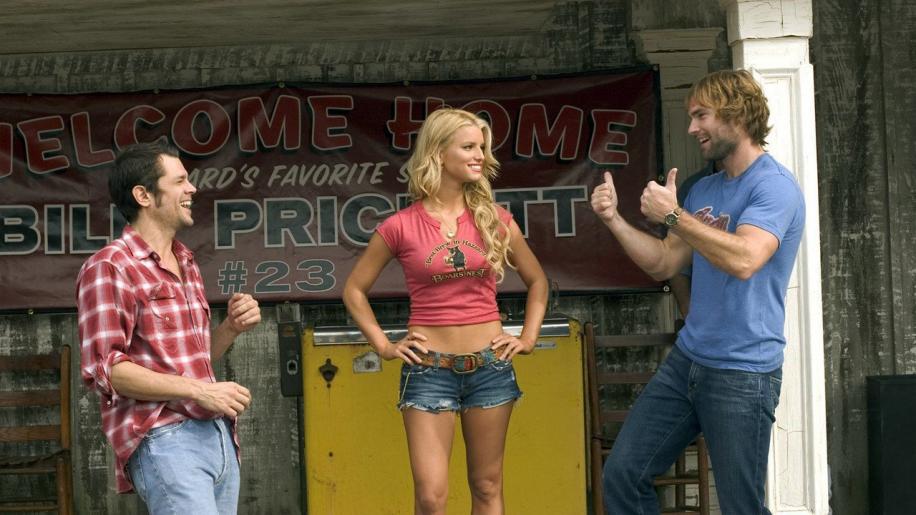 Warner has provided a theatrically correct 2.35:1 aspect anamorphically enhanced for widescreen TVs with an average bitrate of 5.80 Mbps. The print that has been used is clean, free from damage and grain as one would expect from such a modern film. Colours are bold and solid, but I thought tended towards the red in places, though this could have been deliberate from the film makers. Contrast and brightness are set to give very impressive solid blacks adding real depth to the picture. It's the detail level that is the fly in the ointment; it is not constant, fluctuating between good and poor, particularly in the back ground. Digitally there were no compression problems, but there was the merest whiff of edge enhancement. In all a pretty solid picture, certainly better than average but never more than that.

The disc has only the one sound track an English Dolby Digital 5.1 track. Now Warner knows a thing or two about an excellent sound track, unfortunately this isn't one of them. There is plenty of range, a reasonable level of bass holding together decent mid range while the treble is nicely balance, it's just that all the major work comes from the front. With the amount of action happening on screen, it would be natural to assume a terrific surround experience, this is not the case, the rears are used rather too sparsely, the odd car here and there, or to fill out the huge amount of incidental music necessary to these type of films. Whilst there is good bass, there are little LF effects, perhaps two good thumps throughout the entire run time. Dialogue is set to the centre, it is clear and precise and always audible. There is reasonable dynamic separation and when all the speakers come into play it does fill the room plus there is some directional steering to the sound. So whilst the overall track is not bad, it is a little disappointing compared to what could have been; certainly not one to test your system.

This being the unrated DVD there are some extras that are too 'unrated'.

First up there is the Daisy Duke's short shorts featurette, this, like most of the extras on the disc, is rather tongue in cheek and contains interviews with Simpson, and the 'designers of the shorts'. All rather throw away really, without adding anything of any real interest, unless you want to know how to cut down jeans.

Next up is The General Lee Lives featurette, this focuses on the real star of the film, the car. Plenty of interviews with the stunt drivers, restorers and the second unit director as they all drool over the car, must admit to liking this piece, though that might just be 'cos it's about the car.

Following that is How to Launch a Muscle Car 175 feet in 4 Seconds featurette, this explains how the jumps were achieved, basically a nitrogen powered ski launch. Contains the most behind the scene footage of all the extras and interviews with all the same people as the above feature.

The Hazards of Dukes: Behind-the-scenes featurette is the closes thing to a 'making of' and the most substantial extra excluding the additional scenes. All the major cast and crew are interviewed, it is all very light hearted and is narrated as per the film. Nothing new is learned during the run time, an equal measure of behind the scenes and actual finished film are shown. Its all rather unfocused and comes off as rather choppy.

Jessica Simpson has her 'These Boots are Made for Walking' video as an extra in Dolby digital 2.0 stereo, incorporating copious amounts of film footage.

There are some twenty five minutes of additional scenes, unchaptered with no explanation of there excise. Most are reshoots of scenes that made it into the film, if watched whole it is almost a shorter version of the film, some might say more enjoyable because of that! As part of these scenes there are three minutes of unrated additions, these are basically reshoots of one scene in the girls dorm at the university involving drug references and more nudity.

As with the additional scenes above there are two blooper reels, one rated (PG-13) the other 'unrated'. Both contain pretty much the same material, gaffs, mistakes fluffed lines etc., with the difference between the two versions one contains swearing, the other bleeped out swearing. All rather dull.

Also included is the theatrical trailer for the film. Finally when the disc boots up there are (skip-able) ads for already available DVD's such as Seinfeld and Batman Begins.

The Dukes of Hazzard film is puerile, childish, vulgar and crass. It is Hollywood pandering to what is perceives as a majority audience with total disregard to its source material. From a business point of view, they might have a leg to stand on and this bares witness when you consider this DVD release, to cash in on a larger market share by releasing a different version to what has already been seen, albeit only slightly. As a DVD is a reasonable package, the film is given above average picture, slightly let down by the sound but comes right back with a decent selection of extras however light they might be. One for the jackass generation, for everyone else avoid.