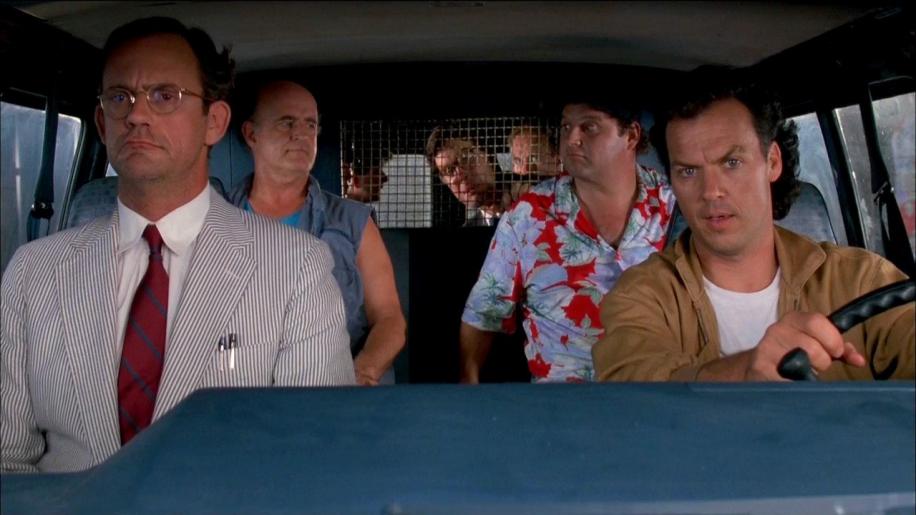 The Dream Team has been prescribed an anamorphic 1.85:1 image that is quite stable and fairly damage free. And, you'll be pleased to note, that despite the overlay of grain - that really is apparent on the white backgrounds of the hospital or the blacks of the city at night - the picture is largely void of compression defects, pixilation or blocking, although I did notice a strange spidery glitch on Dr. Weitzman as he drives the van (this could just be a reflection on the windscreen, but it does look odd) and a slight strobing effect on Henry's stripy jacket.

The colour palette is reasonably warm but not too bright, giving the impression of a slightly dirty picture that is in need of a good scrub. Blacks possess an agreeable solidity that provides a nice element of depth - the pivotal alleyway and Billy's night time stroll with Riley benefiting the most here. Skin tones aren't too shabby and close-up detail is fairly well depicted. One scene in particular appears to showcase the disc's best elements all at once, and that is the Team talking tactics in the police cell. It reveals a good sense of depth, accurate shadow-play and a nice level of contrast typified with the light shining on the bars. The Dolby Surround track isn't too bad in the grand scheme of things - just remember that the film doesn't need an intricate soundscape, or any bombastic aggression to entertain. The front stage delivers the dialogue clearly and supplies a few neat directional effects - Billy throwing the chair at a window, car horns blaring from one speaker to the other. The ambience of the city streets is addressed quite decently, too, though the rears are hardly intrusive. One element that does sound a little disappointing, however, is Jack's scene in the Gospel church - the enthusiastic singing and sermonising could have been beefed-up a bit more, as I feel it sounds slightly restricted.

The film also features one of those appalling 80's electro-pop scores that not only dates it, but consistently irritates. Fortunately, it isn't provided with much vigour. So, to sum up, the track does its job reasonably well and should contribute to the fun of the film. There's only the Theatrical Trailer on this check disc. Which is a shame - can you imagine how much fun it would have been to get the Team in for a group commentary? The Dream Team surpasses its eighties concept-comedy formula by virtue of some great actors simply doing their thing. It's no classic, that's for sure. But there are some good chuckles thrown in and the whole film is a blissful enough diversion without asking too much of us in return. Plus, it's always rewarding to see Keaton going nutso, hear Boyle singing again and to watch Lloyd just ... well, being Lloyd.

The disc has reasonable AV quality - no major issues, certainly - but a dearth of extras. Still, for the budget price, it may be worth picking up.