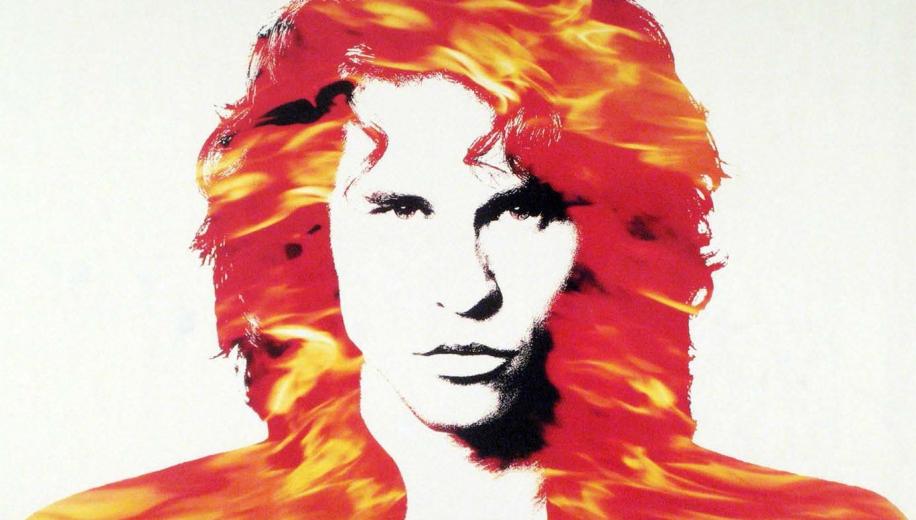 This is the end, My only friend: The end

Like many biopic films, Oliver Stone’s depiction of The Doors’ rise to fame and fortune has less to do with the actual events and more to do with telling a good story. And in this particular case, the story is more about frontman Jim Morrison than The Doors, and even then it’s more Stone’s own fictional representation than anything resembling truth. Indeed, if you take the film at face value, you could be forgiven for thinking that Jim Morrison single-handedly led the sexual and hippy revolution of the late sixties, dragging The Doors behind him, all the while in his pursuit of self-destruction. For such is Stone’s movie; an exercise in light and sound to capture the euphoria of drugs, using The Doors as an excuse for such mania.

Biographically the story tells of a young Morrison who, fascinated by death from an early age and a failed film student but semi-talented poet, engages with three friends whom together form The Doors, while stalking a girl who would later become his long term girlfriend. It’s all very quickly put together, with Val Kilmer putting in an astonishing performance as Morrison, with looks, voice and mannerisms that convince, even if ultimately his portrayal - more to do with Stone’s vision than Kilmer’s talent - would concentrate more on the destructive behaviour than the funny, intelligent poet that most knew the lead singer to be, thus leaving fans and those that knew him to deride the presentation and thereby the film.

As the film progresses, the self-destruction increases; the dependence on alcohol, the drug use, the friction between the band, the wild, uncontrollable crowds, the groupies and hangers-on; all set to the bright lights and the band's own music. There is no denying the film is a spectacle, more to be absorbed than watched. Whether or not you allow yourself to be drawn into the film will depend on your attitude towards the characters; can you sympathise with a crazed, spoilt child who wants nothing more than to get high or is it easier to feel for a squandered talent who was used by all those around him. Stone may have had a clear idea but in the haze of light and sound and the absence of defining narrative, perhaps The Doors is best viewed through the eyes of its protagonist – drunk.

The Doors was traditionally shot with Panaflex Camera cameras on 35mm film. This Ultra HD Blu-ray release was made using the original camera negative which was scanned at 4K and reportedly overseen by Oliver Stone with regards to the colour grading. The disc presents a native 4K 3840 x 2160p resolution image in the widescreen 2.35:1 aspect ratio, and uses 10-bit video depth, a Wide Colour Gamut (WCG), High Dynamic Range in the form of HDR10 and Dolby Vision, and is encoded using the HEVC (H.265) codec, We reviewed the Region free UK Ultra HD Blu-ray release of The Doors on a Panasonic 65DX902B Ultra HD 4K TV with a Panasonic DMP-UB400 Ultra HD Blu-ray player.

The cinematography has been faithfully represented, especially when it comes to HDR and WCG which, together, give a vividness to the colours that the Blu-ray cannot compete with. There are times the intensity of the reds and blues is palpable as the colours bathe the screen. Indeed, the more psychedelic elements of the image really shine from the screen. Flesh tones remain well realised while stage lighting positively beams.

Detail, despite the soft focus used on numerous occasions, is well defined with some decent edges. Skin texture, clothing weaves, cigarette ash, hair; indeed pretty much all close ups are keen. Crowd shots look very impressive with clear individuality to the people, while the skin of the burned duck is crispier than ever!

Black level is very robust, holding some good shadow detail when needed and adding some significant frame depth; this is especially true of any of the concert scenes. The white scale is impressive, adding to highlights and pushing the screen without any detail loss.

There are no compression issues and the original source is clean with no damage. A word on grain; for the most part, the organic nature of the process has been retained, grain is held well and doesn’t distract, however a couple of times (beaches) the grain does intrude and has that slightly artificial look; but it is fleeting and I only mention it in passing. On the whole, this is a very well represented image.

The Dolby Atmos track has been newly re-mastered from the latest (7.1) surround elements and is a revelation. The sound engineer (interviewed in the extras) has made full use of the object based nature of Atmos and his understanding of the format really pays dividends; this really pays off during the many concert scenes where the music floats ethereally over the room, the lyrics come at you and the crowd is all around. There is a total sense of immersion, of being there, that marries with the images to become quite engaging.

The surround scape is used just as well during quieter scenes, such as Jim and Ray discussing the formation of the band on the beach, there the sound of the sea lapping the shore is so very natural, or during the house argument when the various shouts are in front of and behind the main action. Bass is very natural and used, mainly, by the music, LF effects aren’t really a part of the film. Dialogue is clear and given all the directionality it needs, while it is with the score that the majority of the immersion comes from. In all, an extremely well-engineered track.

UHD
Final Cut of Film (138min)
Theatrical Cut of Film (140min)
New Interview with Oliver Stone – A 30 minute chat with the director talking about himself, the film, how it came about, themes and the music.
New Interview with Lon Bender, Mixer for the new Dolby Atmos Mix – 20 minute chat with the engineer who discusses Atmoos (as he pronounces it), the format and his creative input for this new mix, quite fascinating.
Audio Commentary - With Oliver Stone on the Theatrical Cut, previously available.

Blu-ray 3
When You're Strange - 2009 feature length documentary, covering The Doors; from their formation, through drug use, to Morrison's death, a tad more believable than the main feature ...; available with 5.1 surround sound.

Oliver Stone’s visually opulent but narratively flawed biopic picture, The Doors, like so many other biographical features has less to do with truth and more to do with a good story; indeed it is more about Stone’s own fictional representation of front man Jim Morrison and his destructive behaviour than the group itself. Stunning to look at with sound to immerse you, whether or not you can be drawn into the film will depend on your attitude towards Val Kilmer’s extraordinary performance in the lead role - crazed, spoilt child or squandered talent; but whichever it is, the film might be best viewed through the eyes of its protagonist – drunk.

As a Blu-ray set, the package from Studiocanal is pretty good. The native 4K image is keen, detailed, extremely well coloured, bright and vibrant, with strong blacks and clean whites. The Dolby Atmos track is fully immersive with good detailing and positioning of effects while maintaining a well layered mix. The extras package is also beefed up with all new material alongside the previously available features.