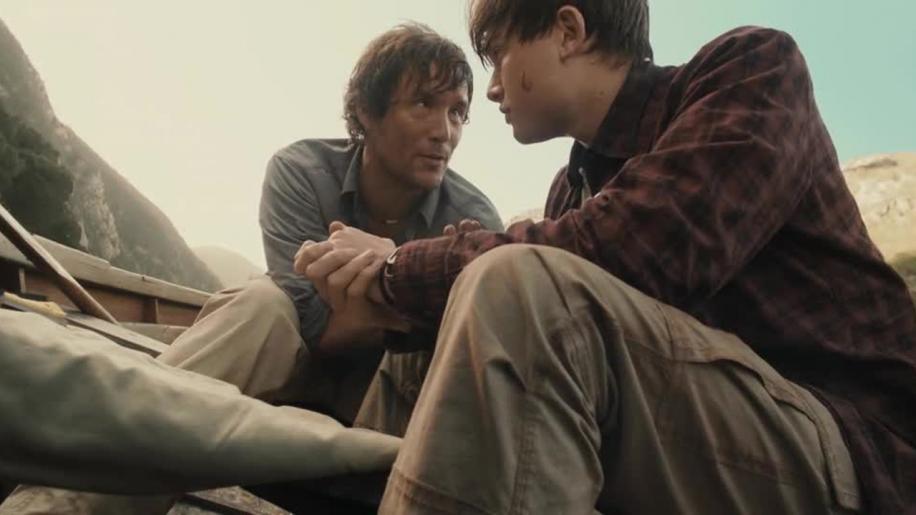 The Dinosaur Project is a small budgeted independent film which follows in the ‘Point of View’ film vein that has seen quite a resurgence in the way such stories are told in recent years. Originally conceived in the sixties in the ‘Mondo’ films their great grandfather is probably the grotesque that is Ruggero Deodato’s Cannibal Holocaust, which actually used the ‘film within a film’ motif as well as actual animal killings in an attempt to blur the lines between the film and reality. Though when one thinks of the POV film, the father must be The Blair Witch Project which had such a phenomenal success that many have tried to capture subsequently – whether it’s studio backed giants such as Cloverfield, or lower budgeted independents such as REC, there is one thing that they all seem to have in common; horror is more intensified when you are part of the action, as defined by the POV. The Dinosaur Project, then, clearly has quite a lot to live up to, as even though not every such film is hugely successful, all gain an amount of notoriety. But, as with everything, there is a natural saturation point and to stand out from the crowd you have to be different or, at least, have a different hook. In this case a real organisation (though played by actors) is examined as it takes an ill-fated excursion into the Congo to try and find evidence of Mokele Mbembe, a mythological creature said to be a modern day dinosaur, in much the same way as the Loch Ness Monster is. As we shall see, a combination of a lacklustre idea, pedestrian execution and a lack of conviction in its direction, The Dinosaur Project is destined to be as ill-fated as the expedition.

A hook that many TV shows currently use is a ‘teaser of the end’, i.e. showing a couple of minutes of the end of the episode than announcing ‘x hours earlier’ meaning that the remaining episode is little more than an exercise in joining the dots until you catch up to that point in time – well guess what, the Dinosaur Project starts off in exactly the same way. Perhaps, not surprisingly, many of the crew, including the director and cinematographer hail from TV and maybe this is where the problems start. The actual beginning, black screen with text informing us of the nature of the film, i.e. lost recovered footage of an ill-fated expedition, you know the kind of thing, should have gone straight into the (simulated) news footage and amateur camerawork exposing the sought after creature and why the expedition is going out into uncharted territory. This would have been a far more interesting hook than showing the ending. However, once we get past this we are introduced to the team members by a series of ‘interviews’ and ‘self’ camera work.

Leader of the Cryptozoological Society (a real society who travels the world exposing, or investigating, mythological creatures and sightings) expedition is Marchant. From a series of inserts we find that he is a divorcee, with a teenage son, a world expert palaeontologist, discoverer of many new species and conservation areas, well respected and really quite headstrong. Played by Richard Dillane, a jobbing TV actor who has played parts in series’ as diverse as Soldier Soldier, Cold Feet, Casualty and the new Doctor Who, but here he has little to do except be gruff with his son and try to hold the group together while it all falls apart. He has a journey of sorts, in that we see his tough exterior crack towards his boy when the world he knows and understands dissolves around him, though his sacrifice at the end (or is it?) seems a little ham fisted. Luke, his son, is introduced as an eager, though impulsive tech geek/rebel who wants nothing more than to be noticed by his father. He seems a little bit old to be acting out in such a way, but at least he does get the sentiment right in his performance. Through devious means, Luke manages to get himself on to the expedition despite his father’s best efforts to leave him behind, and it is his tech savvy, and multitude of cameras that we have to thank for the vast amount (over one hundred hours if you believe the blurb) of footage that makes up the film. These two have a strained relationship that thankfully mellows towards the end, but, to me, they never really come off as father and son.

Other members of the team include Liz Draper, a fresh out of collage doctor who I thought was going to be the typical horror cliché, well, she was to a point, but she kept her clothes well and truly on, even when she was dispatched. Played by TV actress Natasha Loring, who can be seen gracing our screens in Beaver Falls, does well as the perky blonde at the beginning of the film and shares some good scenes with Luke, though she barely makes it into the second half of the film and her loss was supposed to be big deal for Luke; whilst this was hinted at, and indeed the film tried very hard to emote this, in reality there was precious little time to get involved and thus very little feeling once she goes. Of more interest is the final team member Charlie Rutherford whose subtle remarks towards camera in the beginning of the film do foreshadow his eventual breakdown. With just a nod and a wink (as such) Peter Brook (another TV actor but does, at least, have numerous film credits in his short résumé) manages to give the indication that he is not qute right and the jealousy that is simmering beneath the surface is just waiting for the opportunity to break free. Whilst these elements are well done, once again the pace of the piece means that when he does crack it is all pretty sudden and the extreme action he makes and admits to never seem really plausible – particularly when his motivation is nothing more than recognition. The ‘camera’ crew who are there to film the expedition comprise of mainly cannon fodder; though there is some nice interaction given between the cameraman, Dave, and the sound recordest Pete. It’s little more than a superiority complex but it leads nicely to Pete’s standoff with his boom mike and the flying critters that offed Liz.

With the main cast out of the way the story upon all the action rests comes from writer/director Sid Bennett who, like most everyone else, spends most of his time working in TV, but in this case on documentaries. The idea of a group of individuals entering into unknown territory to discover something unique is as old as the hills, and indeed the discovery of dinosaurs in the wild is a close second. The unique selling point of this feature is the dinosaurs combined with the POV filming style – it’s not been done before, so in that respect it is unique. However the tone of the film is quite wrong. Bennett, after years of TV documentaries, is suddenly given fiction to direct and he fills his frame with epic looking shots: sunsets, shots of the sun streaming through the trees, open vistas and vast expanses are all seen as part of the narrative, but they simply don’t sit right. Plus the film is never clear on its intention, or to put it another way, never has the conviction of its set up. The premise of the team being eaten by dinosaurs could have been well seen, if the characters are eaten by the dinosaurs, or the direction style built up the tension to a climactic blood bath; neither of which come to pass. It’s a short film, yes, and the budget is low, yes, but if you look at REC whose horrific premise is elegantly dramatised, so much so that it is incredibly difficult to watch, then come back to The Dinosaur Project, you can see blatant flaws – its a TV short masquerading as a feature film. The combination of different cameras is supposed to give better coverage, i.e. differing points of view, but the film all looks the same – as if it was all captured on the same camera – compare to Blair Witch which did use differing cameras and actually looked like it was amateur footage. Same too with REC single TV camera capturing what’s going on. Here the inter-cut shots just serve to disorientate, black screen, judder and frenzied jerking adding to the confusion. And it doesn’t end there, the characters are nearly blink and you miss them; their set up is handled quite well, but their demise is quick and without consequence. The conservationist guide who knows all about the ‘gate to the dinosaurs’ and was meant to lead them on a merry path to avoid it – what’s with her agenda, we never find out or care. Already noted Charlie’s decent into madness, where did that really come from. When he meets his maker, we’re supposed to feel elated, instead it’s a relief. And as for Lassie the dinosaur, just what where the makers thinking of?

After eighty or so minutes the film finally catches up to the opening sequence with the final twist being (spoilers!) possible survivors. But in all honesty who cares? This would have been a great little film had it been told straight without the POV tag, in a Land That Time Forgot vibe – not original sure, but at least it would have had a clearer idea of where it was going and not try to dabble in horror/sci-fi without any of the conviction needed to convince. The film isn't a total loss, but it’s far from being the entertaining piece that I’m sure it looked on paper. The Dinosaur Project does stand out from the crowd, but not for the reasons that the makers intended.