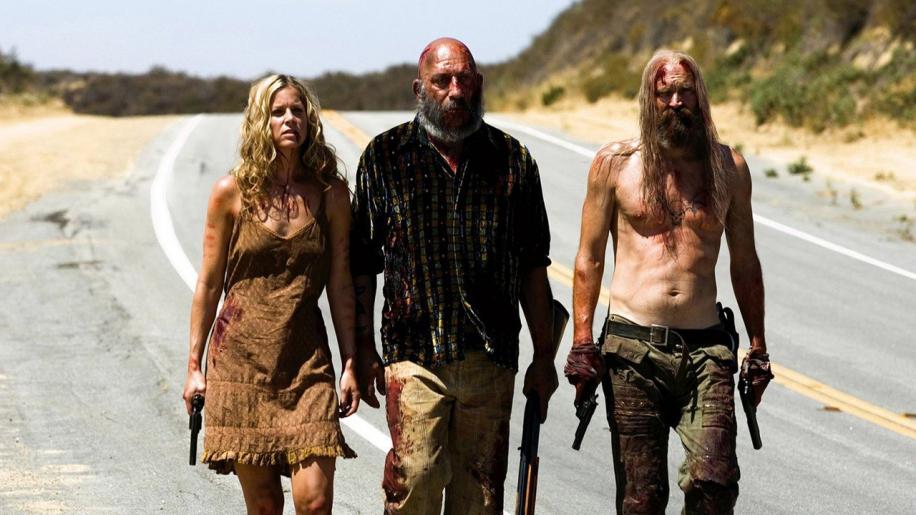 A little above average. There is a mist of grain, here, that looks like a 70's flick, which may be the whole point. However, this process removes clean edges so that detail is lost. Berryman's face still looks as strange as ever, but there is a softness there that makes some scenes seem out of focus. Moreover, the colours are blanched but this is fine to a point. Most of the movie is set in the backwaters of some sandy state with Chain Saw Massacre style trappings. The blanched colours exaggerate the desolate setting making everything look unfriendly. One for the DTS fans if only because the DTS track is better than the Dolby one. Otherwise the sound is not used as effectively as you would believe. Rejects is predominantly front bias. There is some use of the rear speakers but not nearly as intelligently as other movies such as Saw. Saw was mixed using all speakers and had a fantastic ambience such as the opening scene in the bathroom (Dolby track). There is none of this subtlety in Rejects. There is some bass performance, though especially the DTS track. 30 Days of Hell is exactly how a making of... should be made. Detailed beyond the wildest dreams of any fan of this movie this is one exceptional extra. Every day of the 30 day shoot is taken in turn and explored in the most exhaustive manner you almost feel part of the production crew. There are some surprises too. Like, if you met someone called “Rob Zombie” then there are some connotations that this brings up (especially seeing as I haven't seen or heard any of his output): a goth type character that has an unhealthy fascination with Satanism, dresses in black wearing studded wrist bands and New Rock boots and who is constantly raging against the authorities. While the boots and comedy wristbands are present and correct, I was incredibly impressed by Zombie's whole demeanour. No frothing ill advised rebellious character here. Rather Zombie presents a professional, fastidious man who is in complete control of his vision. He seems genuinely interested in the characters, the nuances of how a certain set will feel or the details of a costume.

Anyway, back to 30 Days. This really is precisely the kind of extra that makes the movie a hell of a lot better than it actually is. In fact it is worth buying this disc just for this documentary, especially for Rob Zombie fans. 30 Days because it follows every day of shooting, also includes just as much info on scenes that were cut from the movie which is unusual and offers open insight into a wider world than the movie itself does. Cast and crew also talk candidly and amongst all the back slapping there are some moments of class. This is no ordinary Making of... documentary.

Morris Green Show is a rip off of 70's American talk shows and constitutes a whole episode with an interview with character Dr Satan. Again, Zombie's imagination ad comedic flair brings about a flavour that feels just right.

Mary The Monkey Girl Commercial and Captain Spaulding's Christmas Commercial are extended versions of adverts that appear in the movie. Nothing that outrageous, but enjoyable nonetheless. A tribute to actor Matthew McGrory (he plays the hulking giant Tiny in the movie) is touching and as a part of the family that was the cast and crew deserves a place on this DVD. Otherwise the extras are okay, but none of them shine as the 30 Days documentary. By the time everyone's balls are against the wall, I wasn't sure who to side with. In that situation, nothing onscreen really matters. You are just watching a procession of gruesome imagery with no personal investment to engender any compassion for those in peril. In spite of some imaginative cinematography, Rejects tries to be too many things and fails to accomplish any of them satisfactorily.