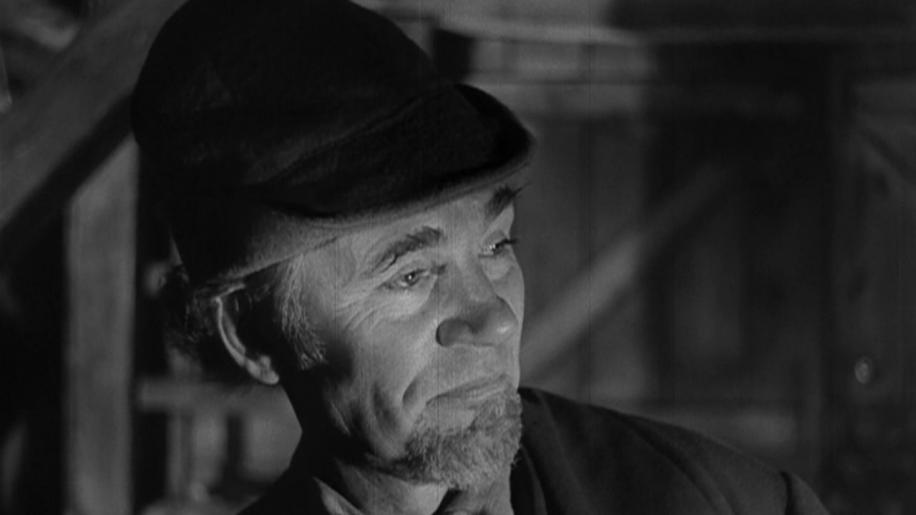 The Devil and Daniel Webster is brought to your screens using the original Academy aspect ratio of 1.37:1 and it's fair, I believe, to say that whilst this print has obviously seen better days it's unlikely that you'll ever be seeing a better version than what has been put on this disc.

From the outset the print has some 'waves' of brightness fluctuations running across the screen from left to right and whilst these are a little distracting initially they tend to almost merge back into the frame and after a short while I found myself not noticing them. There is other print damage also, frequent tramlines, speckles and the occasional small defect where that print itself is obviously missing some small piece.

In saying that though what we are left with is splendid considering the age of this material. The Devil and Daniel Webster makes good use of light and shadow and these are faithfully rendered here, the back lighting usually when Scratch appears on screen showing no signs of banding through the fog, the darker shadowy areas of Jabez's barn where they meet initially to discuss his soul then finally when his soul is on trial still shows great detail in those murky shadows. Yes I have seen better, deeper blacks but these are more than acceptable.

Encoding is good with some slight noise in some brighter sky scenes and the actors exhibiting some enhancement around their dark shoulders but there are no other signs of blocking or banding and in the main the encoding of this disc is a very good presentation, with the score really only slipping because of the print damage and brightness issues. The original mono is the only audio track to be given and it does its job well enough but it is a little low at times and I felt I had to crank the volume a little over my standard base to raise it to an acceptable level.

Being exclusively mono then there is no widening at the fronts and of course nothing at all from the rears so please don't be expecting a resounding track. Herrmann's score still emanates well from the centre channel but like the rest of the audio it does sound a little weak at times, not quite as defined as some later releases, mono or not.

The dialogue is good but again at times just a little muffled, combined with a constant underlying hiss, I did find myself straining to hear some of the monologues or discussions between certain people and found my hand reaching for the remote to back track a little. Like the video before it it has its distractions but not enough to immediately dismiss the disc as a whole. A few scene comparisons between the final released version and a preview, entitled Here is a Man, originally shown on 12th July 1941. The opening titles are a little different, some opening scenes have changed ever so slightly but what I did enjoy, and what was ultimately cut, was overlayed negative images of the devil when things went wrong for poor Jabez Stone and his family. It's as if the devil had some hand in his misfortune and I wish these scenes had been kept in.

What sets this package apart from most others out there though is the inclusion of one small 31 page booklet containing a wealth of information on this feature. It contains 3 short essays on the themes within the film and as a bonus the full original text of the 1937 The Devil and Daniel Webster short story by Stephen Benet. This is a glorious and informative addition and credits Eureka's production values. This is a must read and raises the overall score for this section somewhat. The Devil and Daniel Webster is an excellent upgrading of the original Faust text and one which certainly in the short story brings some relevant themes to the front stage. The fact that these issues were portrayed to some degree, albeit somewhat toned down, in a film from 1941 is a rarity indeed.

There's decent production values in the sets used and some of the special effects implemented and for viewers from that time it must have been enjoyable to see axes in mid air burst into flame at the behest of the devil himself. The actors are good if somewhat over exaggerated by today's standards but that simply makes it a product of its time and nothing to really complain about.

The video and audio have seen better days but they have been cleaned as well as can be expected. As a set I feel it is a must have purchase; not only for the highly enjoyable film itself but also because of that informative booklet which Eureka have pulled together and inserted. As such I yet again suggest you make a purchase from Eureka's catalogue and am more than happy to make that recommendation.