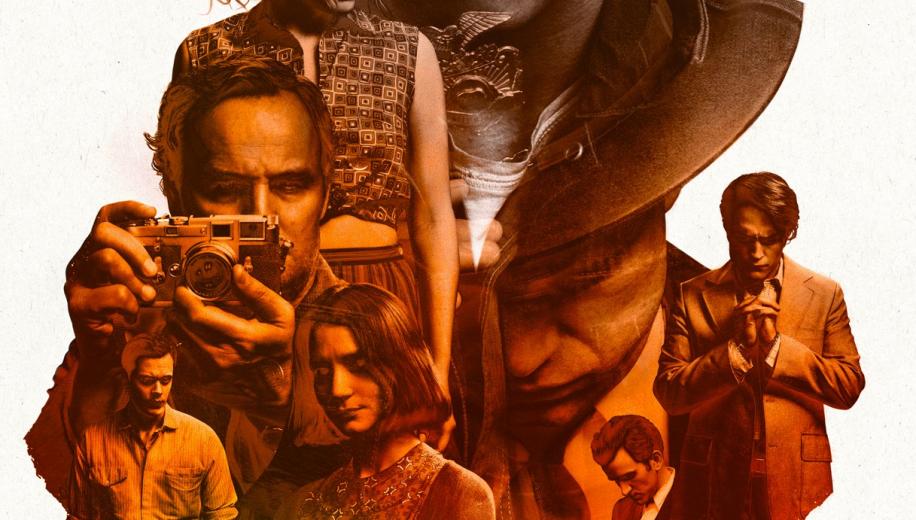 "One nation under God." So goes the 1954 addition to the Pledge of Allegiance. It was an addition made at the height of McCarthyism, the height of a moral panic that American values were being eroded somehow and that the only way for America to survive was with a hard lean into Christianity as a bedrock of morality. The new film from Antonio Campos takes aim at this move back toward Christian fundamentalism and splits it wide open. Far from being the thing that saved and protected America, Evangelical Christianity only caused more harm.

The town of Knockemstiff, Ohio is the type of place where small businesses prosper, where your childhood friend is also your local cop, where the congregation of church is the entire community, where everybody knows your name. But Knockemstiff isn’t the little American Eden it might seem to be. In the two decades following the second world war, Young Arvin Russell sees nothing but corruption and moral decay everywhere he looks and, determined to stake his claim to a little slice of peace, he must resist the seemingly inevitable doom woven into every aspect of the town and prevent his adopted sister from falling prey to the religious zeal of the town's charismatic new pastor.

Each moment of happiness slowly crumbles before finally being punctuated by tragedy and horror.

The Devil All the Time is adapted from the book of the same name by Donald Ray Pollock (who also acts as narrator for the film’s sometimes-effective framing technique). What the film takes from the book, and conveys unflinchingly, is the inextricable binding of brutal violence to the idyll of small- town America and to the values that are held up as its virtues. The artificial divisions of plot lines in the novel are removed for a more contiguous plot - though that does mean we’re treated to several “x years later/earlier” captions which verges on being a little messy. Before long, however, the film settles down a little to focus on a key tension between the agnostic and pragmatic Arvin (played by Tom Holland) and the manipulative cynical religiosity of Reverend Preston Teagardin (Robert Pattinson). Antionio and Paulo Campos’s script filters Pollock’s source novel to take aim squarely at the piety of Evangelical Christianity and its antithetical obsession with punishment, torture and death; how acts of brutality are sanctified, how that portrayal of holiness as suffering echoes down through generations and how that mix of flagellism and credulousness is the bedrock of American society. Campos has a track record of dealing with mental and emotional trauma through his films. Firstly, Afterschool, about the damaging impact of phone camera culture, and Christine, following the final days of Christine Chubbuck, the newsreader who committed suicide on air. The same persistent ominous tone permeates every scene of his latest work. Each moment of happiness slowly crumbles before finally being punctuated by tragedy and horror.

The shifting perspectives and narration employed by the film provide the impression of it being a chronicle, almost journalistic even, so that the film could be trawling through the darkest aspects of any rural town. This is aided by the understated but atmospheric cinematography of Lol Crawley, something he's mastered from his time working on the bleak wierdness of Utopia and Four Lions. Shot on gorgeously underexposed 35mm, the hopeless mood feels woven into the fabric of the picture. This town's history, the film seems to say, is your town's history and it's time it was addressed. A sort of We Need to Talk About Kevin on a national scale.

Campos coaxes powerful performances from every member of the cast achieving the feat of creating real depth of character out of relatively little screen time as the plot shifts between the murderous nihilism of Jason Clarke and Riley Keough as Carl and Sandy Henderson, to the euphoric self- destructive zealotry of Harry Melling (last seen chewing the scenery in The Old Guard) as Roy Laferty. But it is through the hypnotic manipulation in Pattinson's performance, the desperation of Bill Skarsgård as Arvin's father, Willard, and the learned brutality of Tom Holland's Arvin that the film really engages. Never caricatured, always uncomfortable, the most horrifying elements of the film come from both the best and worst of intentions. Of the cast, only Sebastian Stan is given short shrift as the local policeman and brother to Sandy who is just generally a bit gross and never fully realises the opportunity to look at the role of the law in keeping cycles of dependence and vulnerability going.

'We Need to Talk About Kevin' on a national scale.

What The Devil All the Time does most efficiently is to sharply burst the bubble of soft-focus nostalgia for the America of the 50s and 60s, uncritically peddled so frequently by both literature and Hollywood. The childhood of Arvin is not bike-riding and adventures with friends and hoping for a pop-gun for Christmas. It’s bullying and narrow-mindedness and mortality of the kind that affects everyone at some point in their lives. Arvin just happens to be the conduit for all of it at once.

Not content with dismantling the halcyon vision of 50s America, the film also devotes an uneven plot-line towards deconstructing that other national myth: the romantic outlaw. Carl and Sandy represent a clear and cynical parallel with Bonnie and Clyde, only here the dangerous free spirits are represented as an abusive partnership, spiraling toward self destruction. The film seems to slow down for these interludes and despite the chilling performances, the marriage of the two plot lines doesn't feel fully satisfying.

The Devil All the Time is a pessimistic assessment of America. Some might say realistic, more would probably say overly cynical and that’s really the key criticism of the movie as a whole: it’s relentlessly, grindingly bleak. There are times when the palpable disgust at Small Town USA felt by the writers, and the folksy narration of Pollock overwhelms a more subtle point about the systems of religion and class trapping the characters in their cycle of violence and suffering.

In the end, it's an undeniably powerful masterclass in discomfort which makes its point all too effectively, but which is ultimately maybe a little too enamoured with its own depictions of grim violence.