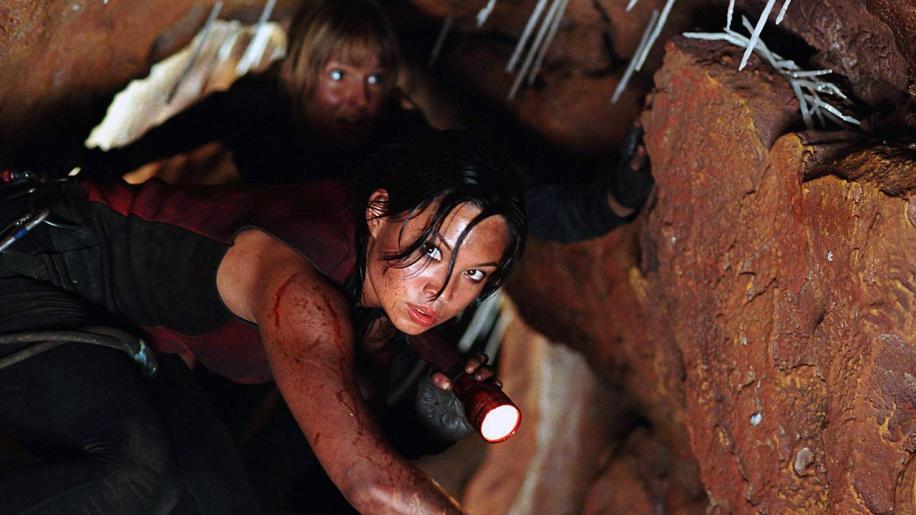 Really utilising an anamorphic 2.35:1 image for a film that is predominantly set inside deep dark caves and inky black crevices may not sound like such a useful idea, yet Marshall's film comes across well with this aspect, as the wider frame actually enhances the claustrophobia of such a setting, creating acres of darkness and intense shadow. And the transfer is at its best during these predominant sequences, with good rendering of torchlight, flames, light-sticks and ambience picking clearly and atmospherically through the gloom, and the huge expanses of darkness suffering no blockiness or artefacting, and remaining satisfyingly deep and solid.

Skin tones are naturalistic, although to be fair, most of the time, the skin of these pretty ladies is covered with blood. And blood, you'll be pleased to know, is extremely red and thick and comes over as well as any gorehound could hope for, despite the darkness that swallows up most of the action. Colours, though hardly taxed with such a setting, are good, but do occasionally betray evidence of smearing and over-saturation - the reds of flares, for example. The gleam of ice-picks flashing in the gloom is well presented and visual information, essentially in close-ups, is particularly good - with fear-filled eyes, drooling fangs and ripped flesh all appearing in succulent detail.

Viewed initially on a 44 inch Sony rear projection and then - much to my delight that it finally turned up - on a 52 inch Sharp 1080p LCD (although only upscaled to 1080i via Denon player), the disc revealed some shortcomings. Chief of these areas of concern was with the open air daylight sequences above ground, which can seem a little indistinct and jagged. The R2 also suffered in this respect, but the vagueness of the image seems slightly more apparent with this NTSC transfer. Edge enhancement, though minimal, is still there and, once again, it is the open air sequences that seem to accentuate it. But, on the whole, The Descent looks very presentable and robust and is a disc that more than holds its own against the vast swathes of darkness that threaten to engulf it.

Well, first the bad news. This R1 release has ditched the fantastic DTS track that graced the R2 which, in itself, is enough to warrant ignoring it if you have the capability for that soundmix and can play Pal discs. But, that said, the DD 5.1 EX track that takes precedence here still offers heaps of effects steered impeccably around the set-up, a stony oomph to the jarring score and plenty of realistic ambience. The sound of skittering stones and distant echoes is naturalistic and can have you glancing over your shoulder. The skin-crawling hissing and snarling from the creatures is presented with a clarity that will have the hair spiking on the back of your neck and David Julyan's great score swells in all the right places and adds tremendously effective stingers throughout. The sense of space is nicely conveyed when the caves open up a bit, with voices and echoes well produced around the speakers. And, on the flipside of that, the tight claustrophobia of the queasily intimate scenes is enhanced with an all-enveloping soundscape that seems to brush against your skin.

A good all-round mix, folks, that knows when to simmer and when to explode. But I'd still take the DTS anyday.

Mostly replicating the extras found on the original R2 release, we have on this edition -

A commentary track featuring Neil Marshall and his cast, followed by another chat with Marshall and the Crew. Both tracks are good fun and very informative, with an attitude that is light-hearted and exceptionally jovial. Anecdotes fly thick and fast - “He kicks me in the head - the bugger!” - and the mood of the film is effectively dissipated with good-natured banter that belies the tension and the drama. Pretty scene-specific and offering a wealth of background trivia, Neil Marshall carries the commentaries like a seasoned pro. Of the two tracks, my favourite would have to be the one that includes the girls as there is a lot more spontaneity and laughter involved. But both still offer great value and repeatability, even they don't quite reach the giddy and daft heights of the cast and crew chat track to be heard on the Dog Soldiers R2 disc.

The Descent: Beneath The Scenes is a great production expose that runs for 42 mins and covers all the main ingredients that went into the making of the film with a fun-loving, free-wheeling attitude that mixes earthy humour, information-overload and fascinating insight into the cast and crew mindset that Neil Marshall encouraged. With the emphasis on witticisms and wise-cracks, the people involved - the girls, the ghouls, the producers, the special effects team and the director, himself - all have their say in a candid and infectiously enthusiastic style that is diametrically opposed to the tone of the movie that they created. Marshall is quick to point out that the story is as much about the descent into madness as it is a descent into the earth. Amidst all the footage from boot-camp and the prosthetic effects being applied - some great moments here - the cast and crew get to talk about their real-life fears in a series of soundbites that, if I remember correctly, formed the basis of a feature in a well-known UK movie magazine. Some quite ribald humour distances this “making of” from the usual run-of-the-mill fluff that studios bolster their discs with and serves to endear the makers all the more. There is also some brilliant footage of the girls, in character, meeting a crawler in full makeup for the very first time. However, be advised that you should not view this feature if haven't already seen the film. Excellent stuff!

Then we get a selection of Deleted and Extended Scenes which run for 10.02 mins with a Play All. These scenes are all fully completed in anamorphic 2.35:1 and in DD 5.1. Mostly they beef up the characters' backstory and there are some nice exchanges of dialogue that enhance the girls and their outlook. There is also a brief and tantalising new shot of a crawler that would have appeared quite early on.

The Outtakes is 5.10 mins of pure blooper reel material. See a crawler do a Mick Jagger impersonation! See a gore-soaked lesbian kiss! See a very handy EXIT sign that would have helped the girls out no end in the caves! It's all good fun, folks, though hardly hysterical.

Then we get a new feature entitled DesEnding, which is new interview with Neil Marshall that was not present on the R2 release. Lasting for 7 mins, this is really just the director discussing the film's original ending - which is the one that we in the UK have had all along - and how and why this was slightly, but traumatically, reduced for the theatrical run that it received in the States. Basically, this is a simple five line answer that has been stretched out with copious clips from the film's climax and with Marshall quite obviously left hanging by some interrogator who has been given strict instructions to spin this thing out. Thus, the director ends up repeating himself ad infinitum about the whys and wherefores of the climactic cuts.

The Storyboard and Scene Comparisons last for 10.20 mins and split the screen between a small widescreen snapshot of finished film - with score and dialogue - and an array of drawn storyboards. The feature is nice though hardly revelatory.

And all this is topped off with a Stills Gallery and some Cast and Crew biographies. The stills contain just over twenty images of varying quality and importance that are, sadly, marred by a surrounding border of scratchy artwork that detracts from their power quite considerably.

All in all, this is a very decent set of bonuses that probes quite effectively behind the scenes of one of modern cinema's most gruelling horror films.

An excellent horror film, The Descent scored very highly with me from the word go. At the cinema it floored me, and on R2 it still made me feel incredibly uncomfortable in my own home, with its awesome AV transfer enhancing the terrors. Now on R1, this supposedly unrated version still has the same effect but then again it is only the same film that we, on these shores, already have. The sound quality is brilliant, but it is not as good as the DTS. The picture, though, is roughly on a par. Extras-wise, this is a good all-round package and even has the benefit of appearing here with the new, though perhaps largely superfluous, interview with Neil Marshall. Also available on Blue-Ray, the R1 Unrated Edition is not worth upgrading to if you already own the R2, which excels with its DTS audio.

The film itself comes enormously well-recommended, no matter which version you opt for.