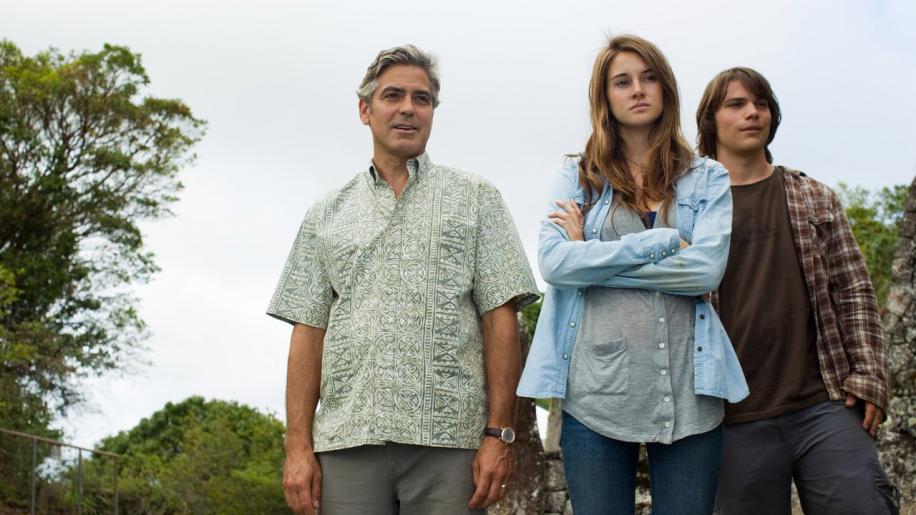 Now I’m all up for George Clooney winning a Best Actor Award, but the question is, does he deserve one for The Descendants?

After all, it wouldn’t be the first time that the Oscars have singled out a talented individual and given them an Award that feels more retrospective than directly related to the performance that they have been nominated for. A case in point is Martin Scorsese, the legendary director who gave us Taxi Driver, Raging Bull, The Last Temptation of Christ and Goodfellas, any of which should have earned him a Best Director Oscar, or at least earned the films Best Picture Oscars. But did he win anything? No. Not even for The Aviator. Indeed, it wasn’t until 2006’s The Departed, an inferior but not-without-its-own-merits remake of the excellent Hong Kong crime thriller Infernal Affairs, that he finally won Best Director (and Best Picture). Now, irrespective of your feelings towards The Departed, it was certainly not the one project – out of his entire film history – that should have received this award. So the Oscars don’t always (in fact, some might argue, seldom) serve justice, and, when they do so, it’s normally in hindsight.

Clooney has already won Best Supporting Actor for his standout performance in the underrated political thriller Syriana, and came close to Best Actor with his tour de force Michael Clayton, in my opinion one of his best movies and best performances ever. In fact, the only reason why I’m not up in arms over the fact that he didn’t win the Award (like I am over the fact that Rourke lost out with The Wrestler in favour of Oscar-favourite Sean Penn) is because he was up against Daniel Day-Lewis for There Will Be Blood, an indisputably astounding method-acting performance. Any other year and he might have stood a shot. Well, now, finally, he looks set to get it. He may be up against a career-best Gary Oldman for Tinker, Tailor, Soldier, Spy (a part of me would love for Oldman to get it), and facing his best buddy Brad Pitt in Moneyball, but I think he’s tipped to be the favourite in this particular race. The question is, does he deserve it, or is it just another “well, it’s about time we gave him an Oscar given all the great films he’s done over the last few years” award?

The Descendants introduces us to Matt King, a Honolulu-based land lawyer who is a descendant of some of the founding natives of Kaua’i. For decades his family have owned 25,000 acres of land on the island but, because of the Rule Against Perpetuities – which limits how long descendants can hold onto land passed down from generation to generation – they have only 7 more years before they lose ownership, and so they have decided to sell. As sole Trustee, the power lies with Matt as to who to sell it to, but with so many interested family members, and most of Hawaii watching his every move, there is a great deal of pressure on him to make the right decision.

So when Matt’s wife suffers a head injury from a boating accident and ends up in a coma, his whole life is thrown into turmoil. Not only does he have to take care of his 10-year old daughter Scottie, downplaying his wife’s life-and-death situation, but he also has to tackle his precocious, somewhat estranged elder daughter, Alex, a 17-year old who openly professes her hatred for her mother. But, over the course of the next few days Matt is going to have to learn to manage his daughters, hold together his family and deal with his friends and the important land transaction with his cousins, keeping a brave face throughout it all, no matter how bad things get, and no matter what shocks life has in store for him.

Surely George Clooney has achieved far more than anybody expected from the same guy who was originally just a popular TV personality? He was in his mid-thirties back then, had already had an unsuccessful stab at Hollywood, and even kept one foot in his only successful project – E.R. – for the first few years of his transition to movies. Aside from natural charm, looks and charisma, there must have been some serious drive and “commitment to his art” for this man to have gone on, in less than two decades, to becoming one of our foremost movie stars – as well as an acclaimed director and producer – now known to be capable of turning his hand to almost any project in any genre to significant success.

What is perhaps most unusual about The Descendants, however, is just how un-Clooney like the man is here. If you consider his Ocean’s personality to be the defining example of everything cool and assured about his trademark performances (Out of Sight, From Dusk Till Dawn, Three Kings etc. etc.), then this is about as far away from that as you could possibly get. Clooney’s Matt King is just another average middle-aged man with a dysfunctional family, the usual work and family-related stresses and all the perfectly human flaws you would expect from a regular guy. He’s only achieved almost-zero-charm in a scant few other projects (including Syriana – no wonders there that this was what he won the Best Supporting Actor Oscar for – and, to a lesser degree, both Michael Clayton and The American) but in The Descendants he absolutely nails it.

Not only is this guy often clumsy with conversation and lost for words, frustrated with how out of touch he is with respect to his daughters, and totally derailed by the situation regarding his wife, but he displays all-too-human traits in the way that he deals with his dilemmas. Indeed we do get to see plenty of that cheeky trademark George Clooney smile, only here it’s used only to cover up the pain and hurt and confusion within – he smiles his way through lies to his family and friends when telling them about his wife’s condition and we’re not charmed by him as is usually the case because we know the utter tragedy beneath the everything’s alright veneer. This is a man who has to deal with just about everything going wrong – an absolute nightmare – and does so in the way that the majority of us do: fumbling our way around in the dark in an attempt to figure a way through it.

The story, based on what one must assume are personal experiences, was written by Kaui Hart Hemmings, who was born and raised in Hawaii. Although it involves family drama and tragedy set against the backdrop of an important land deal which will change the face of Hawaii, the project – either in its original or adapted state – is very much a lead vehicle for Clooney’s character, driven by his actions, experiences and reactions; enhanced by his self-reflecting, downbeat narration; and designed in its very essence to be a human drama about life, betrayal, loss, sacrifice, secrets, forgiveness and, ultimately, closure.

That’s not to say that there aren’t a plethora of other interesting characters populating this world, all of whom add depth and resonance to the proceedings. In terms of supporting actors the ones that most stand out are the children – from the two daughters, played by Amara Miller and Shailene Woodley – to the elder daughter’s boy-‘friend’ (Nick Krause). Woodley deserves particular praise for bringing us a seemingly prototypical troublesome teenager and yet fleshing her out with a surprising amount of depth. Similar kudos to Krause, who bumbles along as an irritating stoner for the most part, until one revealing scene shifts your entire perception of the character.

There are also extended cameo roles for the likes of Matthew Lillard, who, even a decade and a half later, still feels like he’s delivering the same performance that he was back in Scream, and Judy Greer (The Village, 27 Dresses), as well as Beau Bridges (The Fabulous Baker Boys, The Good German), who continues to showcase what feels like the B-side to his brother, Jeff Bridges’, work, and Robert Forster (Jackie Brown, Mulholland Drive), who is simply superb as the angry father-in-law who blames Clooney’s Matt King for everything that has befallen his daughter. Indeed, it’s performances like Forster’s that enable Clooney to so adeptly showcase the range of his acting talent – the tragedy evident in every word and every gesture as he simply takes a lot of what the father venomously dishes out, irrespective of the injustice of it all, knowing simply that it is the right thing to do.

Brought to the screen by the Director of Sideways and About Schmidt, Alexander Payne, this isn't the first time that Clooney has sought to work with this darkly satirical auteur, originally vying for the Sideways role that would go to acclaimed actor Paul Giamatti. Payne has an eye for this kind of introspective human drama and likely brought that onboard with his work on the screenplay which is capable of being at once witty and tragic, nearly always in precise, perfect measures. He also does good work with the direction, despite the fact that the very human drama leaves nothing wild or adventurous in terms of filmwork. Perhaps the only particularly noteworthy stylistic choice was to show one brief shot before the opening credits, an image which stays with you for the rest of the film and remains very effective.

However you’ll undoubtedly watch this film for Clooney, and hopefully be pleasantly surprised by the fact that he is a long way from the effortlessly assured charmer of the Ocean’s movies, and engaged by his subtle, intricately-nuanced and very relatable, human characterisation which is certainly worthy of Oscar attention: just watch any of the scenes where he talks to his comatose wife, they are a measure of truly superior acting and will likely find you holding back tears.

Whether or not his performance is better than Peter Mullan’s in Tyrannosaur is another question – personally I think it’s unforgivable that this film got overlooked by the Oscar committee – but, in terms of the candidates on offer this year, Clooney is certainly up there with Oldman for Tinker, Tailor, Soldier, Spy, and I can see why he’s favoured to win.

The man has come a long way, and there’s no denying that he’s developed from a natural talent into a great actor. If that wasn’t already evident in everything from Syriana to Solaris; The American to Michael Clayton, then it’s certainly indisputable in The Descendants. Recommended.

Although a small-scale film which involves family drama and tragedy set against the backdrop of an important land deal which will potentially change the face of Hawaii, The Descendants is also a showcase for some excellent performances and well-rendered characters. It is an excellent, refreshingly different lead vehicle for George Clooney, who provides an engaging, subtle, intricately-nuanced and very relatable performance that is certainly up there with the best of what’s on offer in terms of Oscar-regarded fare this year. The man has come a long way, and there’s no denying that he’s developed from a natural talent into a great actor. If that wasn’t already evident in everything from Syriana to Solaris; The American to Michael Clayton, then it’s certainly indisputable in The Descendants. Recommended.