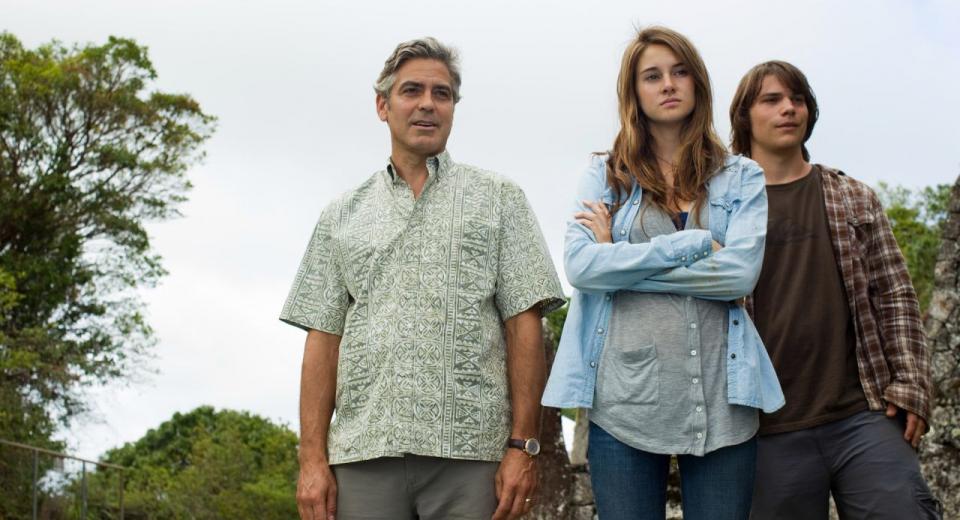 Well you might not have expected it from such a relatively low-key drama, but The Descendants lands on UK Region Free Blu-ray with a spectacular, reference-quality 1080p High Definition video presentation in the movie’s original theatrical aspect ratio of 2.4:1 widescreen. Of course it helps no end that the movie has a beautiful Hawaiian backdrop, but it’s the handling of it that paradise that impresses so much.

Clarity is excellent throughout, offering up fine object detail as well as superb nuances on the longer, more panoramic, vistas. Facial close-ups show up all of Clooney’s weather lines and light stubble, the hair and skin tone on most every character coming across in a thoroughly lifelike way. The colour scheme is broad – as you might only expect from Hawaii! – and offers up wonderful representation of some bright, bold and vibrant colours: from the beautiful blue sky and sea to the lush green vegetation. Skin tones look rich and tanned, and black levels are strong and deep, allowing for excellent darker shots.

All in all, with no significant digital defects – no edge enhancement or excessive DNR tinkering, and only a hint of negligible aliasing – it’s a clean, impressive video presentation that looks just shy of perfect.

On the aural front, the accompanying DTS-HD Master Audio track is almost as impressive, despite the fact that the material isn’t as obviously tailored towards showcasing the potential of your sound system. Dialogue comes across clearly and coherently throughout, up to and including Clooney’s quietly reflective voiceover narration which hits you almost straight from the get-go, largely pervading the frontal array over the course of the proceedings.

Effects come across clearly and coherently; they are almost entirely of the atmospheric variety, but the finely observed ambient noises – like water-based splashing, Clooney’s flip-flops slapping on the pavement, the wind blowing across the trees, and the life-support machines tweeting incessantly – disseminate across your surround system to engulf you in a thoroughly rewarding and eminently lifelike soundscape. The score features traditional Hawaiian music, the beats allowing for further excellent surround accompaniment.

Even though the material itself does not have any standout moments, and even has a few distinct lulls where next to nothing happens at all, it’s still a superior rendition, boasting LFE refinement, dynamism and enough spark to impress throughout. Whilst The Descendants comes to UK Region Free Blu-ray complete with a whole host of welcome extras, a Commentary is conspicuously absent. Still, there’s plenty of material (totally almost a feature-length runtime) to keep fans occupied.

The World Paradise – Hawaii is a black and white, silent Short Film which takes 10 minutes to show off the beautiful island, playing out like a promotional tour video, albeit a good one.

Everybody Loves George offers up 7 minutes of universal praise for Clooney (as is frequently the case when it comes to his co-workers), with both cast and crew here paying tribute to his acting, his experience and his levity on set, often resorting to playing the usual pranks on his colleagues.

Working with Alexander turns us to the director, and spends twice as long attempting to offer him praise, mostly for his filmmaking skills and contribution to this movie.

Casting offers up an 8-minute look at the cast, who were largely chosen without having to do auditions; with the cast and crew talking about who was chosen and what they felt they would bring to the piece, respectively.

Working with Water is an 11-minute addition which has the filmmakers reveal some insight into what it is like to shoot scenes on water; the difficulties it causes; and the different skills that an underwater cinematographer has to bring to the table.

Waiting for the Light is only a 3-minute offering, but it does exemplify the difficulty of some location shoots, as the cast and crew here sit around whilst they are waiting for the clouds to clear so that they can finish a scene.

Hawaiian Style rounds off the cast-and-crew-centric featurettes with a quarter-hour on-location glimpse which has the film being blessed by a local priest and the cast and crew reflecting on what makes the island so special.

The Real Descendants spends 12 minutes with some real-life individuals who had a vested interest in the lands of Hawaii, and they offer up some interesting background into the island’s history and the unusual blood-line legacy.

A Conversation with George Clooney and Alexander Payne is disappointingly short; many fans would have loved to spend more than just 12 minutes with this duo, as they sit back and chat about their work on this and other movies, their inspiration, and the grander scheme to the story which could have made for much more than just one movie (although I’m glad this wasn’t turned into a TV soap!).

Two scenes come into play here, totalling only another 6 minutes of footage. They are literally hit and miss – with one excellent scene (though you can see why they didn’t retain it) and one which wasn’t really even worth including here.

Will I Ever See You Again; Postcards from Paradise; and Honolulu’s Whisper basically offer up a smattering of location and b-roll footage playing against some traditional Hawaiian instrumental music; quite relaxing but utterly pointless.

The disc is rounded off by a Digital Copy of the film. On the face of it, The Descendants is just a quiet, small-scale film which revolves around a family tragedy; exploring the ramifications whilst juxtaposing them against the backdrop of an important land deal that could potentially change the face of Hawaii. Yet the film is also a beautifully observational voyage through a sea of confusing emotions, as navigated by a series of true-to-life characters. Headlined by Clooney, giving his most subtle, intricately-nuanced and down-to-earth performance, has simply never been more easy to relate to, and, in any other year, this could have won him that elusive Best Actor Oscar.

On Region Free UK Blu-ray we get superior video and audio as well as a reasonably interesting selection of extras, all of which makes this something of a must-buy for fans of the film; newcomers – even those who, crazy as it may be, don’t like Clooney – should consider this definitely worth checking out. It’s a worthy, engaging and painfully honest family drama that comes recommended.