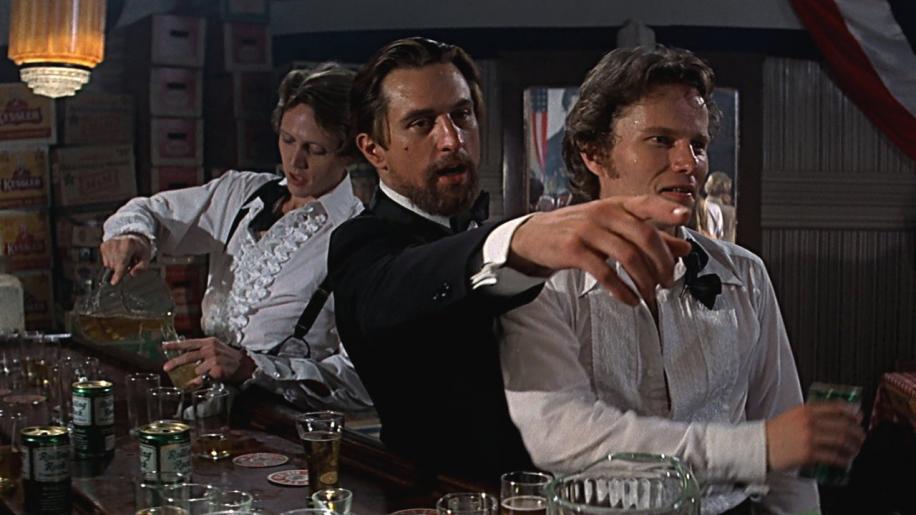 The anamorphic 2.35:1 aspect ratio presentation is a superb looking affair. Rich, clean colours with no bleed and pure blacks. The furnace flames in the steel works leap out at you and look so good you could almost put your hands out to feel the heat. There's no smearing at all. The Vietnamese battlefields and the North Eastern woodlands and mountains of the USA all look fantastic, whether under overcast skies or bright sunshine. Once or twice I noticed a few white specks but it was inconsequential. For a late seventies film this picture is excellent, with very little grain and no obvious flaws. It has been restored very well.

This edition has a solid Dolby 2.0 mix and a Logic 7 surround mix. Curiously there's no Dolby Digital 5.1 mix. For something that has been re-mastered the sound is a little disappointing as I was expecting something with more grunt. The Logic 7 mix is a surround mix but there's very little in the way of rear channel or bass driven work. Also I found the dialogue was a tad more muted than on the 2.0 mix so I switched over to that. The score and effects are well mixed in general and the dialogue is clear with a few exceptions. These were usually in scenes involving noisy effects like helicopters so when the dialogue is drowned out it may have been deliberate. The soundtrack presents the evocative guitar instrumentals in the score very well but overall the audio is restrained.

Oh dear, for a 'Legacy' deluxe two disc edition the extras aren't up to much. The first disc containing the film has a commentary by the cinematographer Vilmos Zsigmond and film journalist Bob Fisher, and as you might expect it's very top heavy on technical issues. They talk well, but three hours of chat about f-stops and light filters is a bit much. Where on earth is a commentary by Cimino himself or De Niro or one of the other heavyweight actors (in fact, any actor)?

The second disc has the trailer and what are described as 'deleted scenes'. They aren't deleted scenes at all but eighteen minutes of alternate camera angles/raw footage of the Roulette scene and a hospital scene. They're interesting to look at but don't give you any more insight into the film and as such, a disappointment. A brief set of text notes finishes off the extras. To add insult to injury, two promised extras that are listed in promotional material - 'Anatomy of a Scene' and 'Acceptance of Best Picture Award' - are missing in action as it were. No sign of them at all. Poor. It's interesting to note that the UK two disc edition of the film has a whole lot more in the way of extras including an interview with Cimino. Ah well, this 'Legacy' edition still has a nice cover and packaging.

Pro-America, Anti-America, bleeding heart liberalism or reactionary jingoism? Who knows, who cares? Let the literary critics argue over the film's politics. You just enjoy a film with a great cast firing on all cylinders with inspired material. The Deer Hunter remains an astonishing, powerful and emotional epic about ordinary people whose lives are changed irrevocably by the Vietnam War.