One shot is what it's all about. 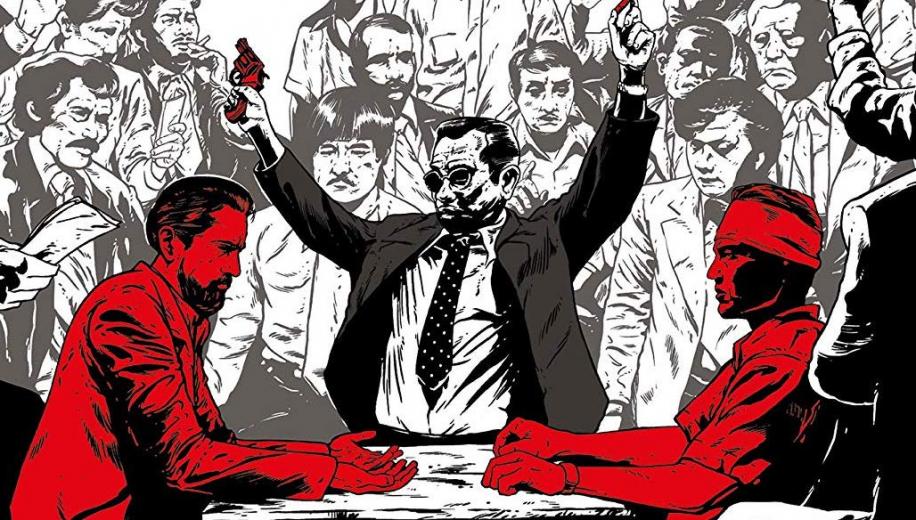 One of the greatest films of all time, and certainly one of the best War movies, Michael Cimino's career best Robert De Niro-starring The Deer Hunter is a masterpiece.

Little can be said about this forty year old movie that hasn't been said before, but it remains a powerful and surprisingly personal voyage to Vietnam, as experienced through the eyes of a close-knit group of Pittsburgh friends who are each devastated in their own individual way by the horrors that they go through.

Only his sophomore directorial effort, Cimino hadn't even hit forty by the time he did The Deer Hunter, which was then - and even now - a strikingly young age to earn yourself a Best Director - and Best Picture Oscar - as well as secure two Best Supporting Actor/Actress nominations into the bargain.

Cimino, whose background was screenplays, reportedly co-wrote both the script and story, which was to adapt a spec script about Russian Roulette players in Vegas into a then-taboo Vietnam movie, one of the first of its kind.


A high point in the careers of almost everybody involved

Shooting hundreds of thousands of feet of film footage, it's no surprise that Peter Zinner won a Best Film Editing Oscar cutting it down to a more manageable three hour plus film, even if it took years for the Studios to release it in anything more than the abbreviated version.

Whether or not it was intended - given the pre-existing origins of that aspect of the plotting - the Russian roulette motif played wonderfully as a parable of the ultimate futility of war, with improvisation-enhanced flourishes that heightened the intensity for some of the most iconic moments in the history of cinema. Oft-dismissed, it's actually the extended wedding sequence build-up that draws you into the small-town world of these characters and leaves the events in Vietnam all the more devastating.

Rounded out by a hauntingly melancholic and utterly memorable score, The Deer Hunter remains a high point in the careers of almost everybody involved, and is truly one of the greatest films of all time.

The Deer Hunter celebrates its 40th Anniversary in style, with Studiocanal pulling out the stops and delivering a brand new 4K restoration of the masterpiece. It's this native 4K presentation which has been used here for the Ultra HD Blu-ray release.


It's certainly the best the film has ever looked.

The intricately textured and exquisitely shot film has never looked better than on this release, with the native 4K presentation lapping up every little nuance - look at the detail in the broad shot as the group leave the refinery, the stunning church, the selection of drinks in the bar, and the Thailand-set war sequences. Hair, beard growth, clothing weaves and background textures get some tremendous attention to detail.

There are still some softer moments, nominally associated with the wedding, but these appear to be inherent to the style of the shoot and, in a similar respect, the grain level is variable, with noise intruding in a way that only HDR appears to provoke (see the sky background in some of the brief shots where only a little patch of sky is visible). Such instances are thankfully fleeting, but those with a distinct grain allergy will still have a reaction.

Darker sequences benefit greatly from the implementation of WCG and HDR, affording impressive shadow detail irrespective of how dark things get, with inky blacks that don't dip into crush, and colours that pop with hitherto unseen intensity. The green glow at the back of the bar, or of streetlights is particularly noticeable now, and red tones also have an added vibrancy, with the whole palette richer and deeper than ever before, even if you’re going to have to forgive a few fleeting moments where they don’t quite get the tones right. It's certainly the best the film has ever looked and whilst it may not be flawless, it should impress longtime fans.

The Deer Hunter sports a strong aural accompaniment in the form of a DTS-HD Master Audio 2.0 track, although, for an alternative, there is a six-track version which attempts to replicate the original 70mm print's audio tracks, which is worth checking out.

The Deer Hunter was an early feature pioneering then then-cutting edge Dolby noise-reduction system, and clearly for Cimino sound design was paramount. Right from the outset, the thundering trucks and booming, echoing industrial furnaces pull you into a richly atmospheric affair. Dialogue remains prioritised, afforded clarity throughout, whilst the exceptional, memorable score defines the movie.

The hearty extended wedding sequence also boasts supreme atmospherics, sweeping you up in the party before the horror that is to follow. There is a slightly muffled quality that pervades the feature (on either audio option) - perhaps inherent to early Dolby noise-reduction tracks - but for the most part it's a great track that brings the proceedings to boisterous life and makes for a strong accompaniment to the 4K remastered visuals.

Studiocanal afford the film a whole host of extra features, new and old, strewn across a lavish 4-disc set which includes 4K Ultra HD and standard Blu-ray copies of the feature film itself, a dedicated Blu-ray disc of special features, and a soundtrack CD, and comes in a package that further includes a 64-page booklet, the original 72-page script to the Russian Roulette short story, and five collectible art cards.

The 4K disc itself ports over nothing whatsoever, not even the Commentaries; for those you have to look to the Blu-ray copy of the film, which includes two Audio Commentaries (fans will be familiar with both) one from Cimino, and one with cinematographer Vilmos Zsigmond and journalist Bob Fisher.

The second Blu-ray disc of extras includes a number of Interviews, including a new Interview with critic and author David Thomson, as well as older Interviews with Cimino, Zsigmond, and John Savage. There are also a number of Deleted and Extended Scenes to round out the disc. The Deer Hunter celebrates its 40th Anniversary in style

The Deer Hunter celebrates its 40th Anniversary in style with Studiocanal's lavish box set, affording the masterpiece an excellent restoration for this native 4K presentation, a strong audio track, and a plethora of great extras, complete in a package with the CD score and a book's worth of writings on the film, including the script for the original short story. Fans should consider this the definitive package and a must-have package at that. Highly recommended and utterly unmissable.