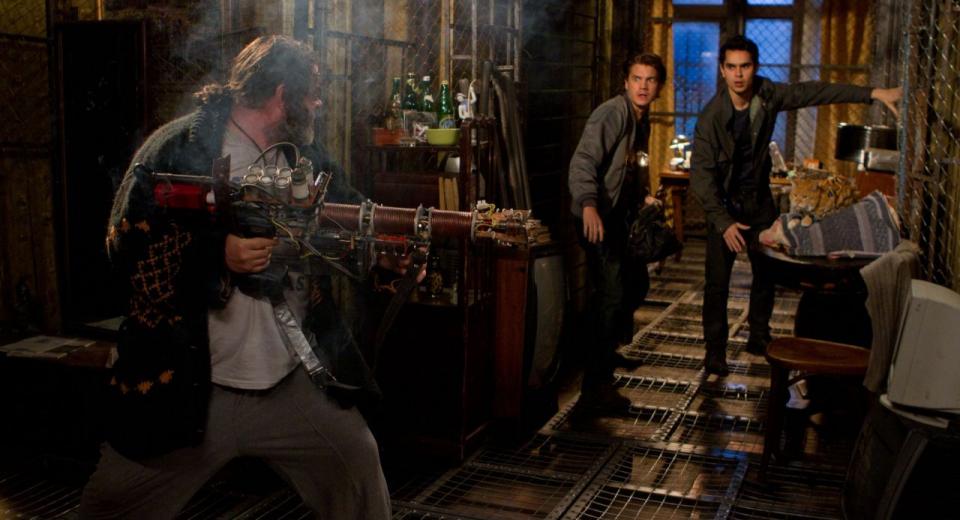 The disc presents a theatrically correct widescreen 2.4:1 1080p 2D and 3D picture which is coded for Region A and Region B, making it nearly Region Free.

Being filmed natively in 3D the film captures that solidity of characters and objects that a conversion simply cannot, and when placing said objects within careful framing a terrific sense of 3D space can be created. Characters have volume and solidity, noses protrude from faces, eyes are inset, hair flows over faces etc. Simple two shots have decent and tangible space between characters which are, in turn, set within 3D space. Framing of shots is set to give maximum usage of depth, extreme foreground objects hold perspective way back into the frame, whether that is a camera set low down to show ground (or water) or there is a deliberate object (box, post, car etc.), such attention to detail has the effect of pulling your eye into the screen. Establishing shots make full use of the added depth and much of Moscow looks extremely good in the early part of the film. The interior sets, being that much smaller, don’t benefit quite so well, though corridors do look long, characters do step through openings (doors, windows, holes in the wall etc.) which adds further dimension. The aliens landing is a typical ‘wow’ moment with effects that push both out of and into the screen. And the underwater scene fairs extremely well (as they always do) as the added volume making you feel like you really are under the surface. While most of the effects are of the depth variety, there are some decent negative parallax moments, obvious ones such as hands or guns pointing at the screen, but more subtle would be the ash that blows around after the initial attack, or explosive debris, glass, brick and alien bits etc, add to further in your face effects. As a whole it is well realised but it lacks that overall sparkle, interior shots lack true depth and when the action hots up faster cutting can conspire to flatten the screen somewhat, but it does have a nice sense of realism.

The rest of the picture fares pretty well too, detail is pretty good with plenty of edges held well into the distance; the many landmarks of Moscow testify to this. Skin has good texture as do clothing weaves, the bars of the Faraday cage are flat and well defined as are the wires around the cat. The image doesn’t soften much, but overall doesn’t quite have that edge that the best examples exhibit.

Colours are a mixed bunch, during the first act colours are bright, bold and vivid, look at all the neon bulbs that surround Moscow’s nightlife, deep reds, lush greens and vibrant blues. But once the invasion starts digital grading reduces the pallet to rather drab mess robbing the picture of any punch. Night time shots look to be totally digitally graded and, to my eye, worse than any ‘day for night’ shot.

Brightness and contrast are set to give reasonable black, again the digital grading hampers any real black which, in turn, smudges over some shadow detail, but at least the setting does add a little to the depth of the frame. The early part of the film shows the most punch though.

Digitally there were no compression problems or any edge enhancement visible and colours graded, for the most part, very well, with only the underwater scenes suffering a little with banding. Using passive technology I experienced no cross talk, but my LG BX580 player did show up that peculiar ‘flashing’ effect seen on Drive Angry – not a disc defect as it played fine on the PS3, so just something to note. I concentrate on the English dts-HD Master Audio 5.1 surround track. Somewhat like the visuals, the surround track, on the surface, is impressive, but closer examination reveals little more than average. The frontal array takes the majority of the work where the separation is pretty wide. Stereo effects are somewhat limited, though the alien ‘dusting’ gets a nice amount of coverage. The surrounds pipe up to add little to the ambience, though they do add something to the heavier effects; gun shots, submerging under water etc., even if majority of the time they are used to fill out the score. Bass is reasonable, mostly to used to fill out the score or in the nightclub scene, though LF effects are somewhat limited; gunshots, occasional explosion or the rumble of the microwave gun being the best examples, though it never reaches the lowest points that the very best discs can achieve. Dialogue is always clear and precise, sounds perfectly natural and always emanates from the front. Nothing wrong with the track, but it doesn't have the sparkle or definition of better discs. Peculiarly the extras in this set are only to be found on the DVD and not on the Blu-ray. The Darkest Hour is an alien invasion actioner that tries to set itself apart from the crowd by taking place in Russia. Told from the point of view of five survivors of the initial attack, the story involves them making their way across a war torn landscape to try and find salvation in the form of a submarine that managed to remain operative during the initial worldwide blackout. A combination of weak script, poor science, lacklustre direction and insipid acting makes this film a chore to sit through; apart from the location there is nothing original to add to the mix as it’s all been seen and done before in far worthier films. Despite the benefit for native 3D there is very little to see.

As a Blu-ray set the package is ok – it is incorrectly labelled as having separate 3D and 2D Blu-rays, it is a single disc with the option to play either. As far as picture goes, its pretty good, clean and clear with decent effects, it’s just nothing out of the ordinary, exactly the same can be said about the sound. The extras package is woeful (compared to the US release) and only on the included DVD. Not really that much to recommend in the end.