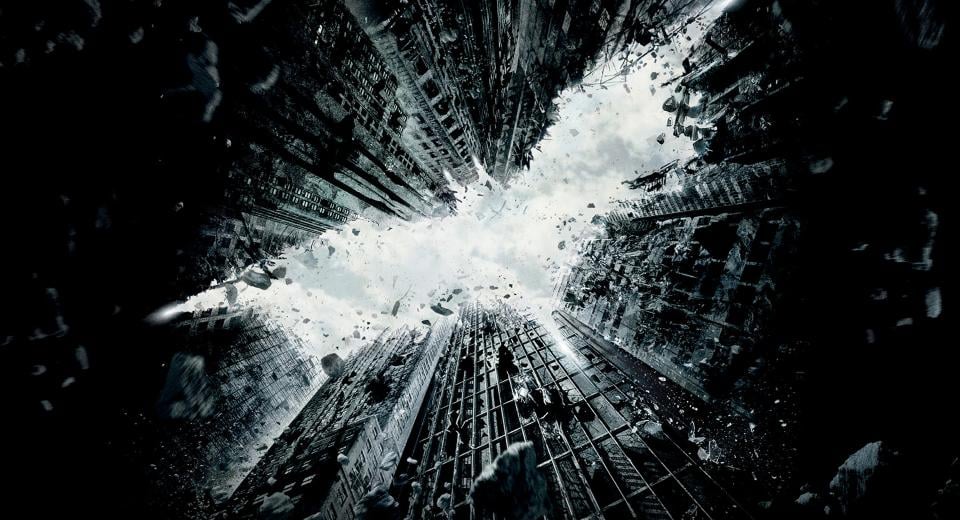 Back when The Dark Knight was still in Post-Production, the stunning Joker robbery opening sequence was attached to prints of I Am Legend, effectively allowing audiences to see a preview of the film seven months before release. It garnered significant interest, undoubtedly not only because of how stunning this opening scene was, but also because of how great an introduction to the new villain it was. Eagerly anticipating Heath Ledger’s rendition of The Joker, fans spent the next seven months salivating over the whole production (as if they weren’t already!). Of course The Dark Knight was a monumental hit, a critical and commercial success on an unprecedented scale – if Batman Begins set the bar for superhero origin stories, The Dark Knight raised the bar for sequels to a level that few other movies – let alone superhero movies – have even come close to.

Originally writer/director Chris Nolan was not too keen on the idea of doing a third movie; he felt that he had said all that he needed to say on the Batman subject, and that The Dark Knight had nicely rounded off the events that he had put in motion back in Batman Begins. But, collaborating with his brother, he managed to come up with a viable second sequel treatment, one which would veritably conclude what he had started in a much more final way. Fans were obviously thrilled to have him back on board, but many were quite wary of his definition of ‘final’. Was he going to kill off Batman? Was this really The End? With talk of another Batman reboot series (in the same vein as the new, highly unnecessary, Spiderman reboot out in 2012) being already in the works, it seems even more likely that Nolan is going to put a full stop to his Batman saga, in such a way as to leave it unable to be continued by another production crew.

To this end, he’s recruited Bane.

For those who don’t know, Bane is a major character from the Batman comics. Yes, I know he briefly popped up in Schumacher’s gaudy Batman & Robin, but there he was just another one of Poison Ivy’s henchmen; many won’t even remember him from it. In the comics, however, he was a major villain. His story arc involved introducing himself to Batman and Gotham City by breaking all of the criminals and madmen out of Blackgate Prison and Arkham Asylum respectively, and then leaving Batman to clean up the streets – basically catching all of the his arch-enemies like The Riddler, The Joker etc. all over again. As he finally finished this mammoth task, an exhausted Batman found himself confronted by the mastermind himself, a monolith of an opponent, whose strength is largely derived from a drug called Venom which he injects himself with regularly. Batman’s no stranger to Venom – having previously dabbled with it enough to need to go cold turkey – and he knows that he is broken and outmatched, but he has to fight anyway. And Bane snaps his spine.

Now, obviously, in terms of the sea of comics that are published each year, over the course of time, Bruce Wayne somehow repairs his back and returns to duty as Batman, but the question is: how much of this is going to come into play in Nolan’s third chapter? (and will it also borrow anything from the comic story that sees Bane working with Ra’s al Ghul – Liam Neeson’s character from the first movie?)

Following suit from what they did with The Dark Knight, the first few minutes of The Dark Knight Rises has been attached to the beginning of IMAX prints of Mission: Impossible – Ghost Protocol. In many ways it does for Bane what it did for The Joker in The Dark Knight, and whilst it may not be as refined, perhaps that’s the point of Bane: blunt force trauma.

Those of you who don’t want to know any more about The Dark Knight Rises before it actually comes out shouldn’t even be reading this in the first place – it’s written for those interested in lapping up every minute detail and, perhaps, not quite up for stumping out the cash to take a trip to the IMAX just to see 6 minutes of the film.

Entirely presented in IMAX, the shot kicks off with a brief word from Commissioner Gordon, who is giving a remembrance speech for the late District Attorney Harvey Dent. We then find ourselves at an airstrip, seeing two prisoners, bound and with bags over the heads, being escorted onto a plane. One of the prisoners is questioned about working for Bane and, when you hear his muffled voice, you immediately get suspicious. The bag is pulled off his head and we find a thick-set, pure muscle brute in a vest, with a black mask over his mouth. The mask itself, strapped around the back of his head, looks as if it has its own set of teeth, such is the shape of it. Of course the agent in charge realises immediately that they are dealing with Bane himself – such were the suspicions that caused him to pull the mask off in the first place. The agent asks whether or not it would be painful if he removed the mask. Bane replies: very... for you. The agent soon figures out that Bane planned to have himself get captured and suddenly the plane starts to vibrate heavily – there’s another, considerably bigger plane flying above it, out of which drops a group of tactical forces-dressed men, who winch themselves over to the smaller plane. Anybody who has seen the pre-credits sequence in James Bond’s Licence to Kill might have an idea as to what happens next – Bane’s group uses the bigger plane to pull the smaller one up by its tale; it’s wings getting ripped off in the process. Everybody in the plane slides down to the cockpit area; Bane just hangs in mid-air using the chair rests, poised like some kind of giant beast. The assailants then blow off the entire tail section and board the plane, shooting some of the agents on board who attempt to defend themselves. Bane himself grabs one of the people from off the plane, ties the two of them in to a cable, murmurs something to one of his own group, whom he appears to ask to stay behind (and sacrifice himself?) and then the cables around the outside of the plane are released, and it drops away beneath Bane and the guy he grabbed, and away from us as an audience, fully utilising the expansive IMAX format to see the shell of a plane falling to the ground like a discarded toy model.

So begins The Dark Knight Rises.

The preview closes out with a trailer-like montage of key moments from the film: Selina Kyle / Catwoman visiting someone in jail; Batman wielding some kind of blue stun-gun-like device that looks like a portable EMP or something; Batman’s tumbler getting absolutely wrecked by what looks like a massive 18-wheeler truck (obviously belonging to Bane); Batman confronting Bane in what appears to be a riot on the steps of City Hall; and a night-time rain-swept shot of Bane discarding Batman’s broken mask...

First impressions? Well, like everybody else who has seen this, I was disappointed because I practically couldn’t understand a single word that came out of Bane’s mouth – it’s not his accent, it’s just the dialogue is not correctly levelled over the effects. Even the score isn’t a problem – Zimmer’s brooding menace working well beneath the surface. No, the dialogue is just hard to make out. And don’t worry, it’s just for the preview prints – Nolan himself has addressed the issue and stated that there is still some Post-Production work that they are going to be doing to the audio. But it’s still disappointing, because, from a dialogue point of view, this is not a great introduction to Bane. That said, he makes a great impression – the sheer scale of what his men did is overwhelming, and clearly indicative of the brute force tactics that Bane is going to bring to bear in his assault on Gotham.

It clearly looks like The Dark Knight Rises is going to be the most expansive entry; this will be conclusive in terms of not only Batman’s fate, but also the characters around him, and, even from the rumbling score and the visual tone that is evident in the clips you can tell that Gotham is in absolute crisis. I myself can’t wait to see what Nolan has in store for us. It would have been nicer if this preview clip was more refined: a better snapshot of the finished product, but it still gives you the right impression – bleak; oppressive; devastating. Summer 2012, here we come.

If you just can't wait until next Summer, and you just don't want to trek out to the IMAX to see it, here's the complete rundown of the recent IMAX preview attached to prints of Mission: Impossible - Ghost Protocol. Just be prepared, there lie spoilers ahead...