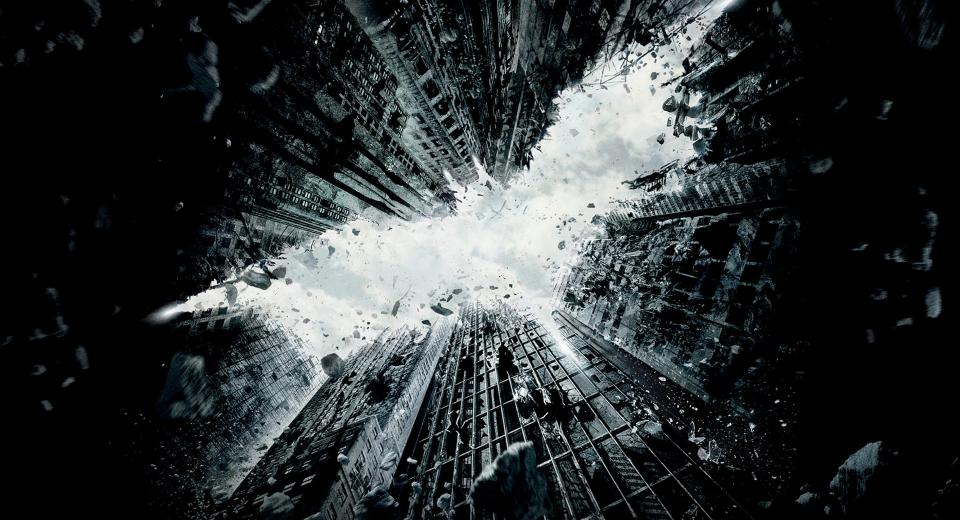 The Dark Knight Rises comes to Region Free UK Blu-ray complete with a 1080p/AVC High Definition video presentation in the dual aspect ratios of original format widescreen 2.4:1 and 70mm IMAX, presented in 1.78:1. It appears to be identical to the US Blu-ray release, which boasts the same shifting aspect ratios and stunning video presentation. For many, this will be great news – the preservation of the original IMAX-format shots (in the best ratio we could hope for on dominant 16:9 TVs) allows us the opportunity to view the already impressive set-pieces in a closer approximation to their original format (something which, for example, the Blu-ray release of Mission Impossible: Ghost Protocol disappointed with by sticking purely to the broader 2.4:1 scope ratio, even for the IMAX scenes) but those with fixed-ratio projectors will consequently find the switching immensely frustrating. Of course, the ideal would be to provide both; but for the majority of users, this is still the better way to present the material (rather than pleasing 100% of people with a slightly less impressive fixed-aspect-ratio presentation).

Either way this should have been a demo disc in almost every respect, and the video presentation is oftentimes outstanding, but there are some reservations. Detail generally is jaw-dropping – considerably more impressive on the IMAX footage, which certainly are the closest you’re going to ever get to perfect, with sharp edges, rich textures and excellent fine object observation. Indeed IMAX shots pop up with such frequency (occasionally just being a scene-setting couple of seconds of cityscape) that you could be forgiven for thinking that the whole presentation is flawless. But it isn’t.

Sure, the daytime shots look spectacular – even the non-IMAX ones – and these sequences certainly are demo quality in most every respect (there’s no denying that the non-IMAX shots have a softer quality to them, which is only really noticeable when juxtaposed with the IMAX footage), allowing pretty-much the entire final act of the movie to soar and impress from start to finish; whereas, conversely, it’s the opening “Harvey Dent Day” bit – after the aerial IMAX heist – that shocks the most.

Check out the detail on Bane’s shearling coat; the weathered look is brought to life with every little bit of wear. Or the backdrop to the stunning opening aerial escape – you can see the landscape with every little nuance, stretching out into the deep background. Or even the deep pit that prisoners try to climb their way out of; each stone, each notch and protrusion giving the wall a palpably real look, the shimmering light over it only further adding to the depth and dimensionality.

The biggest problem comes at night. Crush. It creeps in during the darker moments, sniping at the corners of the screen, desperately trying to eat away at every black suit; every black shadow, and leave within them absolutely no sign of detail whatsoever. It’s the same problem that The Dark Knight had when it appeared on Blu-ray and, for those of us who took several trips to enjoy this at the cinemas, the contrast levels do look different and the picture looks visibly darker. Turn the lights off, put the sound up, and you’ll enjoy the experience of The Dark Knight Rises, but only if you try and look past the oily, delineated crush that can creep into the darker sequences. Either that or spend half an hour hoping that somehow the settings on your TV will counteract the “crush level” set on this Blu-ray.
The rest of the colour scheme is perfected, with a whole array of seasons, showcasing the vibrant greens and blue skies of summer, and also the bleak cold and bright white snow of winter (we all know how great Nolan is with snow sequences, after Inception). Interiors are often lavish and decadent, juxtaposed with the industrial hive of underground labour in Bane’s secret camp. Crush notwithstanding, we still get some spectacular nighttime tones, whether it be from the flashing lights on a fleet of police cars or the neon glow of Batman’s directional EMP gun.

With no noticeable issues beyond that frustrating crush, it’s difficult to know exactly how to assign this video presentation a score. On the one hand, the daytime shots and – in particular – the prevalent IMAX footage, look fantastic, truly demo quality in every respect and oftentimes as close to perfect as you’re ever likely to find on any release; on the other hand, the night sequences are limited in terms of shadow detail, and betrayed by the issue of crush. The former would warrant an unequivocal 10/10, the latter would achieve an 8, at best. I suppose the middleground is a 9; a largely impressive presentation which is frequently demo quality. There are far fewer reservations about the accompanying DTS-HD Master Audio 5.1 track – also identical to the US Blu-ray track – it’s an outstanding offering that is demo quality through and through. The opening thrum will shake your room; the Bane theme will kick in for the outstanding aerial attack, which is so damn loud that it’ll make you feel like your room is being torn apart bit by bit. Indeed perhaps the only complaint could come from those finding it too loud; certainly you’d find it hard to push it right up to reference level because it’ll shake the very foundations of your house. It’s an unabashedly powerful mix, with power, presence and precision – a thunderous assault that grabs you and simply never lets up. Even the quieter, more reflective moments carry with them an undercurrent of undeniable tension, creeping through and invading the quite literal calm before the storm.

When the action comes, however, it’s all-guns-blazing. The score rears up and punches through, but still allows the Batpod to whiz past you from speaker to speaker; body blows to punch at you with relentless fury; and The Bat to lift up and boom across your soundstage, tearing across your living room, and shaking you to the very core. This track is certainly not restrained when it comes to bass elements but, unlike the Avengers soundtrack, doesn’t feel biased too far in favour of them. Dialogue – from Batman’s gravely growl to Bane’s distinctive, guttural tones – still comes across clearly; arguably more coherently than you likely would have found even at the cinema, with practically every single word discernible, even in the height of the ensuing chaos. It’s an ever-immersive, ever-building, ever-rousing mix that makes for the absolute best accompaniment to the movie that you could ever imagine. Demo quality in every respect. Just don’t turn it up to the max. Perhaps the only real disappointment with this disc is the extras, or relative lack thereof. There’s nothing truly substantial here – no mammoth Making-of Documentary, no Picture-in-Picture facilities and no Audio Commentary from the filmmakers. We do, however, get a second disc which is packed with extras that try their absolute best to cover all the bases, albeit in a piecemeal fashion.
The highlight is an hour-long Documentary that really has very little to do with the movie specifically. Entitled The Batmobile, it charts the history of the vehicle across pretty-much every single incarnation in the decades during which Batman has existed. Then we get three sub-sections: Production, Characters, and Reflections, which each carry a number of Focus Point Featurettes, totalling almost two hours of mini-bites, each no more than a few minutes’ long. The offerings cover almost every important topic – from the grand set-pieces to the cool vehicles; from Catwoman to Bane; from shooting in IMAX to the End of the Legend – and, even if we don’t get anything truly meaty, this should keep most fans ticking over until some SuperDeluxeTrilogyEdition comes out.
The disc is rounded off by a Trailer Archive. This is it. The end to the greatest comic-book film series of all time. Although it may be far from perfect – cramming an ambitiously grand triple-tale of Batman’s return, Gotham’s fall and The Dark Knight Rising all into one movie, where each story could’ve been better served by its own separate instalment – this is still a grand, fitting end to a stunning trilogy which has single-handedly defined, re-defined and transcended the limitations of its genre. From the epic cinematography to the powerful score; from the committed performances to the perfect characterisations; from the fantastic action sequences to the non-stop finale – The Dark Knight Trilogy represents a career-high for master filmmaker Christopher Nolan; this is how to do big budget blockbuster movies: with scale and substance. These are not only the defining Batman interpretations; not only the defining comic-book adaptations; but arguably the defining blockbuster action-thrillers of a post-Millennium Hollywood. And the trilogy ends here.

On Region Free UK Blu-ray we get a very good package that will likely be used as a demo piece for quite some time. Indeed the IMAX footage is really quite stunning – picture-perfect – even if the black crush does devalue the overall video presentation slightly. The audio, of course, is utterly reference quality through and through (volume notwithstanding) and probably reason alone to buy this disc. In terms of extras, there’s nothing much worth reporting, but perhaps there will be a Special Edition Trilogy Boxset somewhere down the line. In the meantime this is an unequivocal must-have purchase. Flaws notwithstanding, this film should be in everybody’s collection, completing the magnificent trilogy that is one of the greatest defining blockbuster trilogies of all-time.

This review is sponsored by