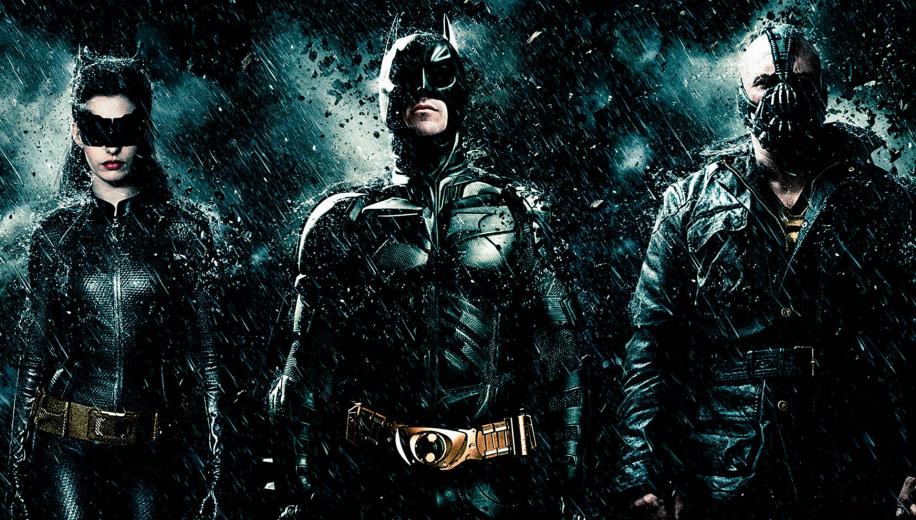 Christopher Nolan rounds out the definitive Batman series with an ambitious, flawed and suitably epic conclusion.

If there was ever a candidate for a film that demanded to be split into a Part 1 and Part 2 (unlike all those stories unnecessarily split into two - even three - films), it's The Dark Knight Rises. The mammoth narrative fuses the epic comic book story of Knightfall - terrorist Bane's very literal breaking of Batman - with the Gotham-in-chaos apocalyptic story of No Man's Land, and injects elements of Frank Miller's seminal The Dark Knight Returns (which always deserved its own film), all in an attempt to give Nolan's franchise a decent third part conclusion and send-off. Which is great - and precisely what the film does - but at the cost of telling a pretty crammed story which arguably could have done with more time to be fully developed (Knightfall is a film all of its own, and the post-Knightfall 'rise' lessens the impact when it comes so swiftly afterwards).
All the parts are certainly in place, with an older greying Bale working as a 'retired' Batman, whilst Nolan's go-to cadre of supporting characters/actors all return and newcomers Tom Hardy, Anne Hathaway and Marion Cotillard come to the fore as important new players. Hardy makes Bane into a powerfully physical antagonist, Hathaway gives some credibility to Catwoman, and even if Cotillard's reveal is a wasted twist, that's more to do with the aforementioned volume of stuff that Nolan wants to inject into this epic conclusion. The same can be said for Joseph Gordon-Levitt's somewhat cliched torchbearer. Plenty of Rises gets by just on staging and sheer impact - the entire underground 'survivors' subplot and 'healing' arc - rather than narrative coherence, and ultimately this means that Nolan can deliver a fitting conclusion to his definitive Dark Knight saga. After The Dark Knight, with a brief 35mm-only break for Inception, Nolan returned to his shifting formats and aspect ratios for the sequel, using more IMAX 70 footage than he had on the previous Batman outing, and delivering - in particular - a striking opening sequence which was originally previewed before Mission: Impossible - Ghost Protocol at the cinema. The IMAX scenes, as with The Dark Knight, look nigh on perfect, filling up the full 1.78:1 screen for a large portion of the runtime, whilst the remaining 35mm footage is surprisingly good (particularly after the softer bronzed Inception from two years previously), leaving this easy demo territory.


The IMAX scenes look nigh on perfect

Detail is staggering on the IMAX footage, leaving the 35mm footage struggling to step out of the shadow, but the native 4K scan offers a universally rich image throughout the runtime, affording some excellent close-ups, impressive skin textures, clothing weaves and background details, and - thanks to keen HDR implementation - improved shadow detail too. The colour scheme is excellently rendered too, with vibrant tones and generally rich, deep blacks - notwithstanding a little of that Nolan-esque grey he goes for in favour of resolutely inky blacks. WCG implementation doesn't tweak the image too differently from what we know, instead working subtly to improve tones across the board. It's demo and reference territory; an excellent presentation.

The accompanying DTS-HD Master Audio 5.1 track may not be the immersive Dolby Atmos / DTS:X track fans were hoping for, but that's really no big thing when you consider that the lossless offering still makes for a stomping aural accompaniment - amidst the best that the format has to offer. Indeed, on reflection, it's ironic to note that quite so many of Nolan's films make for demo material on the aural front even though none of them implement immersive HD audio tracks.

Dialogue is, reassuringly, clear and coherent throughout, and given some measure of prioritisation, which must come as a huge relief to all those who saw the preview of the opening sequence - attached, as aforementioned, to Ghost Protocol - where Tom Hardy's dialogue as Bane was utterly incomprehensible and where Nolan had cranked up the effects, score and LFE element to such an extent that there was no way you could ever hope to hear anything that was being said (some might argue that an early preview of Interstellar could have yielded similar benefits). A judicious amount of ADR later, and The Dark Knight Rises suddenly promoted a comprehensibly Bane. Yet, even though the words are important, dialogue is still the least of the priorities on this intense and suitably bombastic final chapter, delivering that stunning opening sequence with penetrating power, captivating you with some electric fight sequences, grand setpieces and throaty vehicles (of the aerial variety this time around). And Zimmer goes full tilt in a score that helps build the almost endless crescendo of chaos that erupts across the epic runtime. It's a phenomenal track that does each and every element justice. As with the other Nolan releases, the Ultra HD Blu-ray disc for The Dark Knight Rises remains bare bones, with the accompanying Blu-ray set affording the same substantial supplemental features as the earlier Blu-ray release.


The same substantial features as the earlier Blu-ray release

Much like the later Dunkirk, the Featurette-driven Behind the Scenes material is set in different sections, with over a dozen smaller Featurettes in the Production chapter, whilst Characters and Reflections have only 2-3 each, all housed within the catchall title Ending the Knight. It's a comprehensive offering, covering everything from the opening setpiece to the pivotal battles and destruction of the stadium, and whilst the individual Featurettes range from about 2-10 minutes in duration, the sheer volume allow for a hefty overview of the entire production. And that's not it, with a similarly comprehensive Documentary on the Batmobile, itself running at almost an hour in length, and dipping into the long history of the famous vehicle in its various incarnations across the years, with contributions from plenty of individuals not limited to the scope of Nolan's production team (including Tim Burton!). The disc is rounded off by a Stills Gallery and Trailer Archive. Christopher Nolan rounds out the definitive Batman saga with a fitting conclusion that has but one flaw - it could have made for not one but two excellent movies - which, in the grand scheme of this outstanding trilogy, feels like asking too much from a filmmaker who has already delivered so much.

The Ultra HD Blu-ray release of The Dark Knight Rises - coming as part of the Dark Knight Trilogy set, itself released at the same time as a selection of some seven Nolan titles on the format - affords the epic conclusion stunning video and audio and a strong selection of extras and comes recommended.