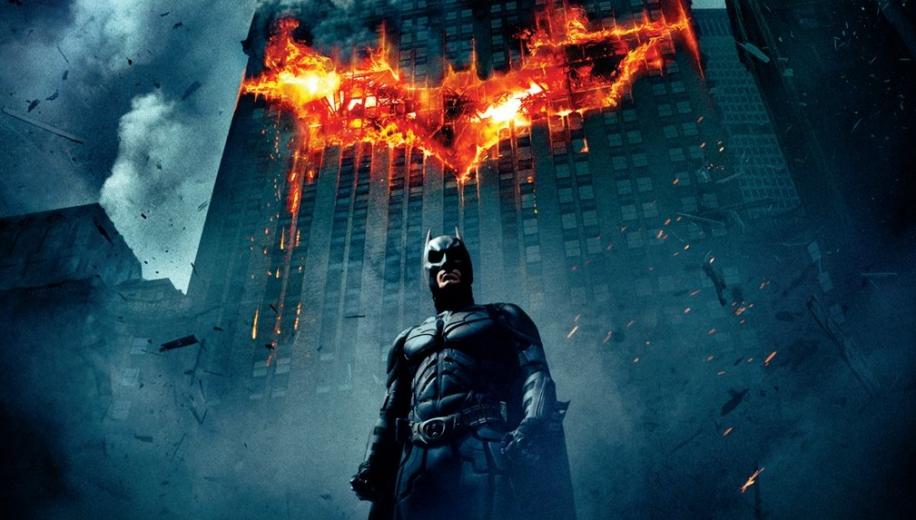 Christopher Nolan pulls a The Empire Strikes Back with his tremendous The Dark Knight, an epic sequel that builds upon the excellent foundation of Batman Begins, telling a momentous story involving the Dark Knight's greatest enemy, The Joker, and changes the entire course of the franchise, turning the tables for the vigilante Gotham accepted as an icon of hope. With one of the greatest opening sequences of all time, we are introduced to one of the greatest villain characters of all time, delivered with award-worthy intensity by Heath Ledger, in what is absolutely the highlight of his cut-short career. Jack Nicholson may have been a great Joker back in the day, but Ledger takes it to another level, removing the camp colourfulness in favour of keen intelligence and dangerously unpredictable psychosis.
The ambiguous stories behind the Joker's origins are just one of the highlights to this character, who puts to shame almost every other superhero villain - particular of the CG variety - despite the complete absence of any superpowers. Nolan brings his newfound IMAX expertise to bear here, wielding it to open up some outstanding action sequences, from that assault on the police convoy to the explosive hospital scene and the grand finale - a climax which doesn't rely on conventional one-on-one fisticuffs to deliver a truly satisfying conclusion to that aspect of the tale. With great performances from the returning cast, surprisingly complex characters, stunning cinematography, a fabulous Heat-inspired score from Zimmer and a sweeping and suitably epic narrative, this is Nolan doing blockbuster perfection. Shot on both 35mm and IMAX 65mm, this was the first film in Nolan's oeuvre where he started playing with shifting aspect ratios and IMAX, and - but for Inception - he's never looked back. As with the later titles, which pretty-much see a gradual increase in terms of quality and sheer perfection, The Dark Knight heads in that very direction, boasting some striking IMAX shots that will leave your jaw on the floor, but also providing more consistent, stable and impressive 35mm footage too for the rest of the film. Whilst Batman Begins was somewhat inconsistent, it still provided a clear upgrade over its flawed earlier Blu-ray release; The Dark Knight follows suit, and whilst the original Blu-ray release wasn't as flawed as Batman Begins, any problems have here similarly been cleared up in favour of an excellent film presentation that largely only misses out on a perfect 10 score due to the fact that Nolan's later productions arguably need some room to manoeuvre in terms of scoring, and perhaps the fact that ultimately it isn't quite perfect.

Detail on the 35mm footage, presented in 2.39:1 widescreen, is very good indeed, with no signs of the edge enhancement that was present on the Blu-ray, and much finer observations on skin textures and background nuances. HDR brings forth greater shadow detail - and the film is so richly bathed in shadows that it makes all the difference. Sure, as with the other Nolan releases, some accommodation has to be made for the director's preferred notion of 'black', but the contrast is generally excellent and the HDR effectively used to bring the piece to life. WCG too brings more vibrancy to the fore, but without any unnecessarily showy tactics, instead increasing the natural hues and tones on offer - from the striking red lipstick of The Joker to the bright explosions he masterminds. Skin tones are far more consistent than Batman Begins and far less bronzed than Inception, and overall The Dark Knight's Ultra HD Blu-ray release gets things just right which, in terms of a previously flawed Blu-ray release, is exactly what you want.

Of course, the IMAX footage is a game-changer, and is sheer and utter perfection, putting The Joker's crazed visage in your living room, or spinning trucks end over end within your very house. It's where this native 4K presentation really strikes out; absolutely stunning, and absolutely the best the format has to offer. All three films in the Dark Knight Trilogy benefit from stellar audio tracks, and The Dark Knight is certainly no exception, boasting some blistering action sequences and a tremendous score by composer Hans Zimmer, who channels the robbery theme in Michael Mann's Heat to great effect for the opening sequence, and sets the tone for a hell of a ride.


A fabulous track; demo and reference through and through

Promoted with a DTS-HD Master Audio 5.1 flavour track this time around, there's really very little - if any - difference between this and the previous Dolby TrueHD 5.1 track, both delivering stunning reference lossless audio which has no doubt been used to demo AV equipment for the best part of a decade now. Dialogue remains firmly prioritised across the frontal array, delivered with clarity throughout, which has arguably been an increasingly rare beast in later Nolan efforts, however it's the effects and score that really stand out here.

Zimmer's penetrating score gives percussive momentum to The Joker's planned chaos, whilst The Dark Knight himself gets a suitably rousing heroic theme, and the whole thing brims with intensity thanks to the excellent scoring, keeping the surrounds - and of course the ever-present LFE channel - in action almost throughout the piece. Effects are impressive not just in terms of punch but also precision, with booming gunshots offering some measure of directionality, and roaring engines, chaotic crowds, and explosive hospitals all delivered with refined weight. It's a fabulous track; demo and reference through and through. As with the other Nolan releases, the Ultra HD Blu-ray disc for The Dark Knight remains bare bones, with the accompanying Blu-ray set affording the same solid supplemental features that adorned the preceding release.


The same solid features from the preceding release

Aside from the Focus Points feature which provides almost an hour of PiP-style background on the main movie disc, we get a couple of fairly weighty 45 minute Featurettes (Nolan always prefers Featurettes) in the form of Batman Unmasked and Batman Tech, which provide solid background into the character - perhaps even too much so with the psychologists on hand - as well as the gadgets and vehicles. There are also 45 minutes' worth of faux newscasts from Gotham Tonight, and the second disc is rounded off by a hefty stills gallery and set of Trailers. This is Nolan doing a superhero blockbuster to perfection

The Ultra HD Blu-ray release of The Dark Knight - coming as part of the Dark Knight Trilogy set, itself released at the same time as a selection of some seven Nolan titles on the format - affords the seminal, definitive Batman movie excellent video and stunning audio and a strong selection of extras and comes highly recommended.