Something enchanting and mesmerising about the film 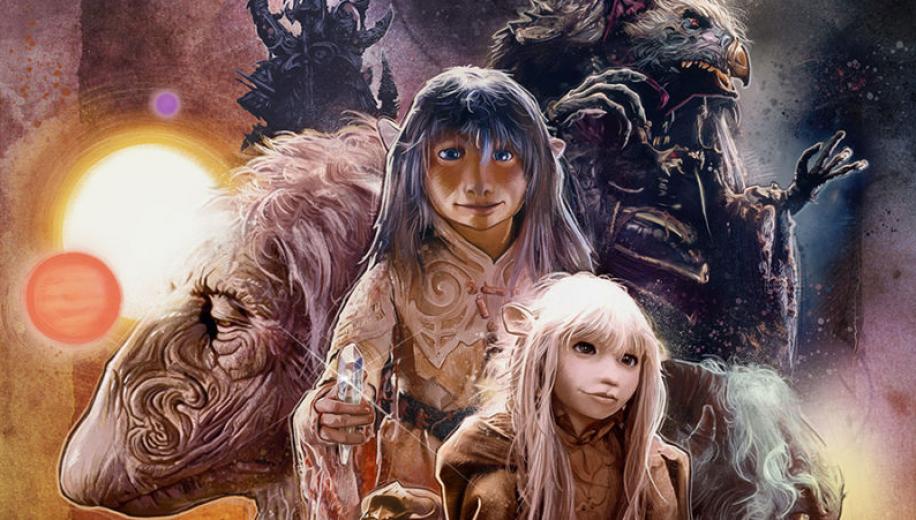 THE GREAT CONJUNCTION IS THE END OF THE WORLD! Or the beginning.

Innovators Jim Henson and Frank Oz, both masters of puppeteering, pooled their respective talents, along with fantasy illustrator Brian Froud, in a maelstrom of creative genius which culminated in the creation of the fantasy epic The Dark Crystal. Lauded at the time (1982) for being the first live action film to contain no human characters, the sheer audacity of the creatures on show was an absolute marvel. In true working collaboration, puppeteers, mimes, actors, as well as the sculptors, animatronics and other technicians had input into the world of the Dark Crystal, creating its own unique slice of cinema.
The story is incredibly simplistic: good defeats evil, but it is the way that the story unfolds that brings such delight. Told as a children’s fantasy tale with more than a few hints of ‘Brother’s Grimm horror’, there are distinct lines between what is good and what is bad. So whilst the outcome of the story is never in doubt, the whole world is alive and dripping with authenticity. Shot and performed like a true feature, there is no compromise with the cinematography or tone to the fact that it is a kid’s puppet movie; no it is a bold and fantastical adventure that brings as much wonder today as it did 35 years ago. The Dark Crystal was shot on 35mm film and has been scanned, cleaned up and finished as a 4K Digital Intermediate thanks to Sony Pictures. It is this 4K DI that has been used here for this Ultra HD Blu-ray. The film is presented with a native 3840 x 2160p resolution and in a widescreen 2.39:1 aspect ratio, the disc uses 10-bit video depth, a Wider Colour Gamut (WCG) and High Dynamic Range (HDR), and is encoded using the HEVC (H.265) codec for HRD10.

What is immediately apparent is the amount of fine detail that is now available, the old Blu-ray was pretty decent, but it pails to this new scan and even more so in native 4K. It is in the attention to detail in the backgrounds where the greatest revelations are: the many plants and tiny creatures that skitter across the screen, there are previously hitherto unseen details available throughout; check out the forests, the rock faces, the water falls or the dining tables. It also shows just how masterful the puppets were, with hardly any artefacts of their material showing.


The attention to detail in the backgrounds show the greatest revelations

The HDR and WCG add significantly to the overall depth of the frame; there is even more going on in the darkness (caverns, underground parties or the Tower itself) while the bright end is just as detailed, check out the Historians in the final act. Some of the matte shots are a bit more visible now, but it’s a small price to pay. The deep colours of the Skeksisian clothing are even more pronounced, while the Dark Crystal itself is wonderfully seen. Check out the iridescence of the Garthim carapaces, even more defined, while the luminous eyes now pierce the darkness. Now, it could be argued that the brighter picture impacts of the ‘dark’ nature of the Blu-ray, thus robbing the image of some atmosphere, and it would be valid, however, it does open up the whole frame with terrific colouring and more to see in both higher and lower ends, and that alone makes it worth the upgrade. The source is clean and the sheen of grain lends an organic feel to the piece, perhaps slightly digitised on the odd occasion (specifically the Dark Crystal itself) at least it is there and not DNR’d out. The disc has been given a Dolby Atmos remix and addresses some of the issues from the previous Blu-ray releases’ front heavy mix. First up there is now a greater since of ‘space’ with this track; for example when we are first introduced to Jen playing his pipes in the forest, the mix is far more open and layered with rustling leaves, water and the sound of the pipes having a real sense of place within the surround field, likewise Aughra’s constellation map now moves around the room, and when the Garthim attack their movements and chaos causing antics are spread around the field. More subtle moments also benefit – the Mystics chants, for example, with each one coming in at a different place within the mix, or odd creatures moving across tables now have a surround presence, likewise their rescue of Kira. Dialogue is, as it’s always been, clear, precise and held to the frontal array, while the score makes good use of the surround field. Bass is deep and strong and held tight within the mix. It doesn’t quite do enough to bring it up to a demo track, but the improvements make for a much more satisfying listen. Extras are all found on the included Blu-ray:

The Myth, Magic and Henson Legacy featurette – The only new feature in the set, both Lisa Henson and Toby Froud regale us with their stories of their respective fathers and how the film came about and their contributions to it. Pretty decent watch, but the background music was too intrusive for my liking.
Commentary with Brian Froud – Technical chat that covers nearly every base.
Picture-in-Picture Storyboard Track – Pop up images of the concept art.
Original Skeksis Language Scenes with Introduction by Screenwriter David Odell – The abandoned nonsense track removed to make the film more comprehensible.
The World of The Dark Crystal – Documentary benefiting from plenty of behind the scene footage made during the creative process of the film.
Reflections of The Dark Crystal – Two featurettes (Light on the Path of Creation & Shard of Illusion) which look back at the making of the film.
Deleted Scenes
Photo Galleries
Theatrical Teaser & Trailer 1982 saw Jim Henson and Frank Oz’s The Dark Crystal hit the theatres, and fantasy movies were never quite the same again. The very simplistic tale of good triumphing over evil is made extraordinary with the visual aspect of the movie and the ‘Brother’s Grimm’ horror aspects for what is a simple puppet movie. There is something enchanting and mesmerising about the piece that entices repeat viewing, made all the more wonderful for we will never see it’s like again. (Do we count the up and coming Netflix series? No)


A bold and fantastical adventure

The 4K Ultra HD Blu-ray package from Sony is a pretty decent set; the picture is a terrific upgrade in terms of detail, colour depth and black level; some may balk at the lighter image losing the Blu-ray’s atmosphere, but the good far out ways any short comings in this regard. The Dolby Atmos track is a far superior upgrade with a wider surround field and effects layered into 3D space, while bass is deep and tight. There is even a brand new featurette to accompany all the older extras included on the Blu-ray. A must have for fans of the genre.