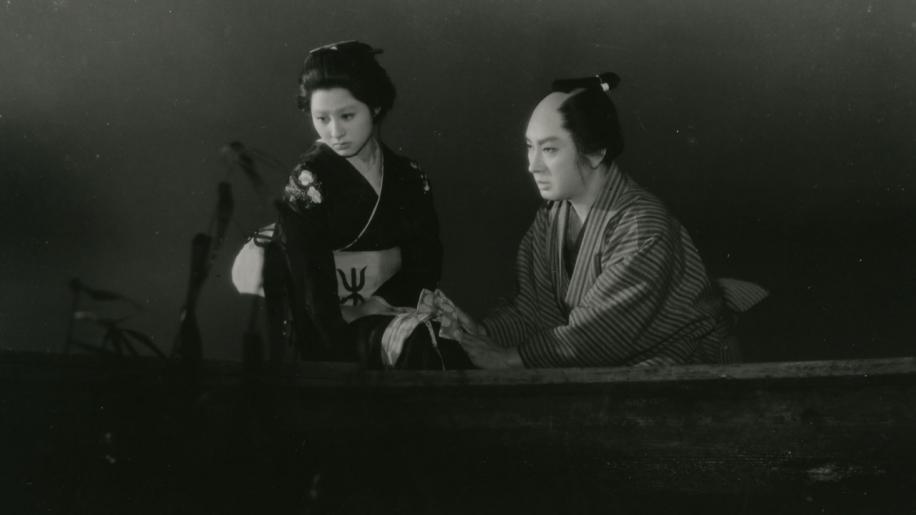 Mozaemon Chikamatsu was a Japanese dramatist of the mid to late 17th century and wrote this play about 10 years prior to his death. The title Chikamatsu Monogatari translates to 'A Tale from Chikamatsu'. However, titles like that lack a little obvious description as to what the storyline is about and so this film has better become to be known in modern western circles as 'The Crucified Lovers'.
Released in 1954 this was Mizoguchi's third project in the same year. Uwasa no onna, had been released only 5 months prior to Chikamatsu Monogatari. It is understood that this film was actually filmed in only 28 days. Now, that is not a great deal of time for the likes of Mizoguchi who is generally renowned for his attention to detail and perfection of settings. Still, the film bears his hallmarks and remains quite a competent drama throughout.
Set in 17th century Japan in Kyoto, rich with feudal social backgrounds, the story is set in a noble merchant's house. The merchant Ishun (Eitaro Shindo) is a printer of considerable repute and has amassed great fortune by way of producing bespoke calendars. He's married to a young and pretty wife Osan (Kyoko Kagawa) and it appears to be a marriage of convenience, especially from her part. Her family had become impoverished and her mother lives along with her brother. Unfortunately her brother also has habits of frittering away his family's wealth in the local geisha houses and has run up debts to the tune of 5 kan of gold.
Master Ishun employs an apprentice by the name of Mohei (Kazuo Hasegawa) who is extremely gifted and his talents are always in demand by all the clients at the printers. Mohei is a genuinely unassuming chap and has many admirers from within the house, one being a servant girl by the name of Otama (Yoko Minamida). However, Ishun has taken a fancy to Otama himself and makes many advances upon her, none of which are returned.
The story essentially revolves around a love affair borne out of quite an innocent and completely unassuming incident. Osan, the lady of the house needs to find 5 kan of gold to help her mother and her brother from their debtors. Ishun not being a generous chap has absolutely no intention of giving her family the money. Mohei on the other hand being a compassionate guy overhears the problem and understands Osan's situation. He offers to do what he can to help her.
Conveniently, Mohei also looks after the business's books so he attempts to de-fraud Ishun of the 5 kan. It's not a considerable amount of money but Ishun is made aware of what Mohei has tried and proceeds to punish him. A besotted Otama tries in vain to partly shoulder the blame for Mohei in order to spare him punishment. Ishun has none of it and decides to punish them both.
All the while Osan recognises that both of these two had in actual fact become scapegoats in order to protect her. Her conscience soon gets the better of her and she tries to convince her husband Ishun otherwise, but to no avail. Having also discovered what her husband had been up to with Otama, she becomes increasingly disillusioned and decides to leave him. A distraught Osan then seeks Mohei and on meeting up they both decide to escape from what is in store from their apparently common fate.
The storyline picks up some pace as the two flea from Kyoto and go into hiding. The whole thing becomes rather like a fugitive chase. Their disappearance sparks many rumours, one being that the two have eloped. Whilst this was never the case originally, the two do eventually develop feelings and confess to undying love for one another.
The story invariably comes to a predictable end with the two lovers being caught and brought back to Kyoto. Ultimately, in a land that does not tolerate such behaviour the two know they face a grave outcome. Whilst Osan actually has the opportunity to return to nobility she chooses to stay with Mohei until the bitter end. Though, this is not before they both exact a suitable revenge upon Ishun.
Chikamatsu Monogatari is a play that is brought to cinematic life through the hands of Japanese master filmmaker, Mizoguchi. The original story and play has remarkably much of the Shakespearean about it. The film on the other hand is quite dour in many respects and the pace is also slow which will not be to everyone's liking. It is rumoured that Mizoguchi was not enamoured to have to take this project on back in 1954. It's not one his better efforts and much of the film feels like a production that has simply gone through the motions. Peculiarly, the final result is still a drama worthy of some note but ultimately remains one for Mizoguchi fans only.