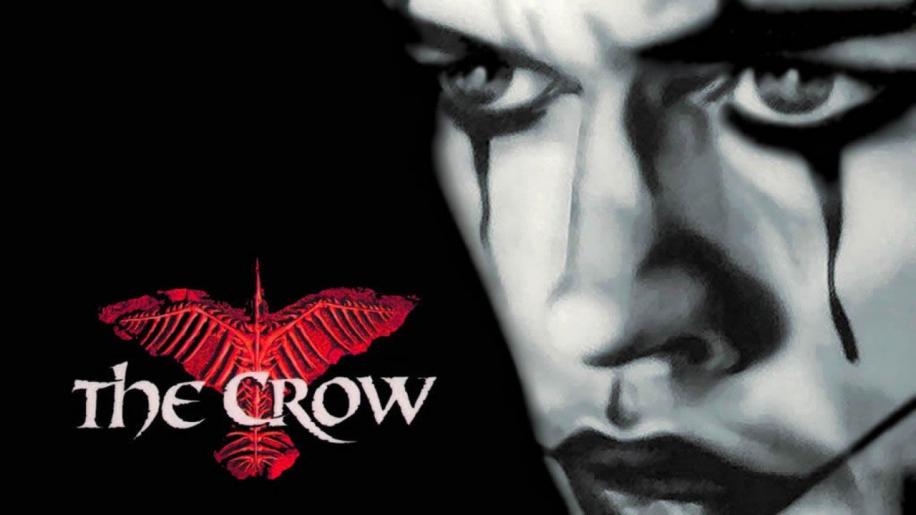 Presented in an anamorphic widescreen ratio of 1.85:1 to match its theatrical release, this is a superb transfer, bearing in mind it's a low budget movie and is 11 years old. First off, the negatives, which is that there is some dust and scratches on the print, which although it's a shame, isn't a complete surprise either. It's unlikely that the studio will ever send this for a THX restoration, but that's the only criticism I have. I noticed a little artifacting present during the opening scene, but it didn't last very long, as for edge enhancement, there was a little when the crow is on top of the cross with the sky behind it, but I think this is just bad superimposing, as it was the only time I noticed it. Colours are bright and vivid when they are apparent, as the general visual tone of the movie is very gothic and monochromatic, from the Kabuki style makeup worn by Draven to his entire black attire. That's not saying it is devoid of colour - from bright yellows and oranges in the explosions, to the scarlet red of blood at the finale, it is handled well and without any bleeding either. There's a slight graininess in places, but it's not to distracting.

Comparing the image to the R1 2 Disc version, I have to say that PQ wise they are identical, even the same dust/scratch marks on the print was apparent. Containing a Dolby Digital and DTS track, I am pleased to say this is one engaging soundtrack, from the frenzied musical numbers in Top Dollar's club to the explosions of T-Bird's T-Bird, this is a relentless sonic experience. Dialogue is clear and crisp, natural sounding with more warmth and depth on the DTS soundtrack. That's not suggesting the Dolby mix is bad, I just don't think it has the natural tone that the DTS has, in fact it sounds “compressed” for want of a better description.

Having said that, when we have some action and in particular, some of the large explosions, the LFE nicely shakes the room with a deep booming rumble that gives you a real sense of the size of the explosion - no damp squib explosions here. Surrounds are engaged relentlessly, from ambient effects such as the wind whistling to bullets passing by you in the club shoot out scene, this is a really engaging soundtrack.

Comparing this to the R1 release again, I'd say there's hardly any difference to the soundtracks, although I felt the front L/R channels were slightly louder on the Japanese release, but it is only slight, although judging by the BitRate this could be a full-rate DTS track. Sadly other than a single commentary track, this is devoid of any other extras. However there are 2 other releases, the 2-disk deluxe edition as well as a rather nice 3 disk collectors edition complete with a statue of Draven. What else can I say about this movie? Well, nothing really. It's beautifully gothic, with a nice humour to it, although some of the one liners aren't the best, but certainly better than say “You're not taking me to the cooler”. Still among all the gothic imagery, the explosions, the violence and the brooding, Kabuki make up wearing hero, we have a tale of revenge, humanity, redemption and, above all else, a love so strong, even death couldn't stop it.