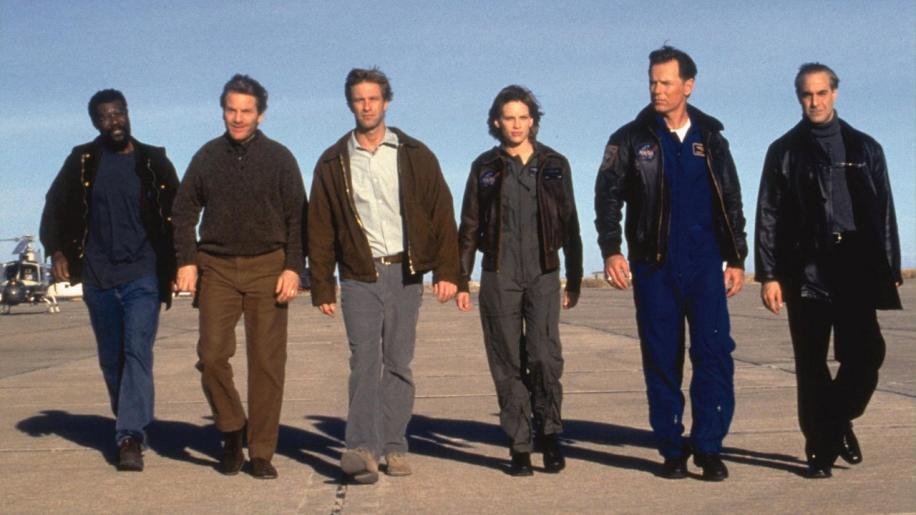 I was dreading this DVD coming through, I had seen a few trailers and it looked dire. So it was with some surprise that I actually really enjoyed this pop corn blockbuster, a movie which does not take itself seriously at all. The plot is far fetched and the science used to explain it is absurd, but the film does well to just smooth over the huge plot holes and where it cannot manage to gloss over the problem it just agrees that this isn't subtle movie making.

Several strange occurrences happen early in the picture, people with pace makers in a twelve-block area of the city drop down dead, Pigeons in London start flying into walls, A shuttle landing goes wrong and strange lights start to appear in the skies. Geologist Josh Keyes (Aaron Eckhart) starts to investigate and comes to the conclusion that the earth is losing it's electromagnetic field. He takes his findings to a leading Government scientist Zimsky (Stanmley Tucci) who decides to bring this information to the attention of the White House. After a meeting with the National security board Keyes and Zimsky are joined by a computer hacker, two shuttle pilots, and an explosives expert and are introduced to Dr Brazleton (Delroy Lindo). It just so happens (as things do in this type of picture) that Brazleton is busy designing a ship capable of travelling to the Earth's core, giving them the opportunity to restart it using nuclear bombs. The plan is decided upon and off our heroes go into the centre of the planet. The science is plain silly and the films way of skipping over the absurd nature of the plot just makes this so enjoyable. It's stupid popcorn fluff but at no time does the do anymore than provide the viewer with silly entertainment, this movie does anything but take itself seriously. The best way of describing how it manages this is with a line to the Dr who is building the ship, the Government official asks how much he would need to finish in three months, to which he gets the reply £200 billion. "Will you take a cheque" says the government official to whom Keyes chirps in that a credit card would be better as they would get air miles. Ok not hilarious, but just sums up the film brilliantly.

The movie will never be anything special, but all it attempts to do is provide big money special effects and action orientated entertainment in the same vain as Armageddon, and it achieves this well. Some will not be able to switch off enough to enjoy this, but if you don't mind leaving you common sense and brain at the cinema room door, then prepare for some fun.

The version we review here is the Japanese Limited Pressing which is likely to sell out very quickly indeed. The menus are in English and the subtitles are easy to remove with one click off the remote. The packaging on the edition is very good with a cardboard sleeve showing earth from space, the right end pulls off to reveal the earth's core and the open end containing an amaray case with the film and bonus disc. This edition is also the only version of the movie available in Full bitrate DTS 5.1 and for this reason will be a very popular choice with the collector's out there.