An effective, if rather unoriginal, shocker that’s supposedly based on a true story 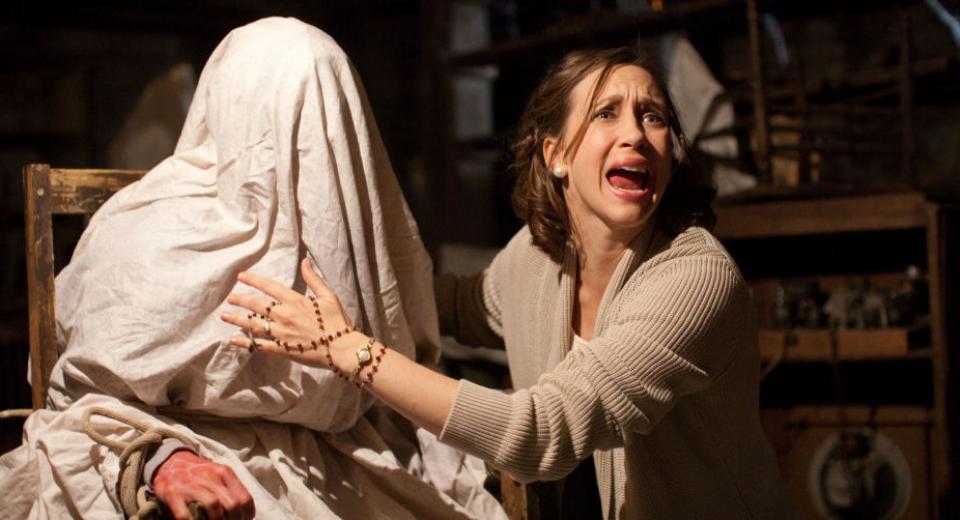 If there’s one thing that’s guaranteed to make our blood boil it’s a supernatural film that claims to be based on a true story. It’s bad enough when films are based on documented events because the narrative undoubtedly has to be adjusted to fit the cinematic medium. Butch Cassidy and the Sundance Kid got it right by starting with the words - “Most of what follows is true.” However when a story is a load of supernatural mumbo jumbo that’s obviously made up from the start, please don’t insult our intelligence by claiming it’s based on actual events.

This is especially true of The Conjuring because the source of the story is Lorraine and Ed Warren, previously best known for the case that formed the basis of the book The Amityville Horror. This book and its subsequent film have long since been discredited but we're asked to believe this other case, which forms the basis of The Conjuring, is not only true but so terrifying that the Warrens haven’t spoken of it for 40 years. Yeah right. Aside from the fact that the basic story bears multiple similarities to The Amityville Horror, if the events depicted are to be believed then the story contains the kind of evidence that would legitimise charlatans like the Warrens, who in actuality just prey on people’s ignorance, superstitions and gullibility.

This is a shame because as a horror film The Conjuring, whilst not very original, is actually very effective and delivers plenty of scares. Despite the name the story doesn’t involve magicians, so we’re not quite sure why it’s called The Conjuring, but it does involve a working class family who move into a farmhouse in the middle of nowhere. Why they move there is never really made clear but what is emphasised is that they’ve sunk all their money into this dump, which supposedly explains why they don’t get the hell out of it when things start getting nasty. Anyway, if you’ve seen The Amityville Horror (original, multiple sequels or even the remake) then you’ll know what to expect - strange goings on and a family terrorised by malevolent spirits.

The film doesn’t just borrow heavily from The Amityville Horror though, which given the supposed source of the story is hardly a surprise, but also from a number of other famous horror films including The Haunting (the Robert Wise original not the dreadful Jan de Bont remake), The Exorcist and Poltergeist. So we get the loud banging noises that Wise used so effectively in The Haunting, along with a shot of static on a TV and a malevolent doll to remind us of the Steven Spielberg/Tobe Hooper opus. There’s even an exorcism complete with a levitation just like in The Exorcist, although coming so soon after This is the End, with its ‘The Exorcism of Jonah Hill’ sequence, it was hard not to laugh at that point.

Unintentional laughs, lack of originality and dubious source material aside, The Conjuring is actually a genuinely chilling and visceral horror film that delivers plenty of scares during the course of its running time. The film was helmed by James Wan, who has already directed some decent horror films, including the original Saw and Insidious. When it comes to his colour pallete, Wan is clearly going for a more desaturated 1970s look to both suit the time frame of the film and to evoke the films The Conjuring is referencing. It certainly appears to have worked, with the film’s old-school scares conjuring up a $138 million box office from a $20 million budget. In fact The Conjuring has been so successful that a sequel based on another of the Warrens' 'true' cases has already been green-lit.

Whilst the film’s nerve-shredding use of scare tactics certainly pays dividends, it’s the film’s superior cast that really help sell the horror. Patrick Wilson and Vera Farmiga play Ed and Lorraine Warren, whilst Ron Livingston and Lili Taylor play the terrorised blue-collar parents, Roger and Carolyn Perron. The Perron’s have five daughters and their gender and experiences once again remind the audience of films like The Exorcist and Poltergeist. Thankfully the young actresses playing the roles are able to emote their fear extremely well, especially Joey King as Christine, whose experience of having her legged pulled by an unseen hand in the middle of the night will doubtless fuel many a child’s nightmares.

Despite the claims that the film represents actual events, the story structure is pure horror film cliche, so you know when a demonic doll is introduced at the start of the movie in an unrelated case, you'll obviously be seeing it again later in the film. The Warrens' special room at their house where they keep all the ‘possessed’ objects from their cases seems like a small scale version of the warehouse at the end of Raiders of the Lost Ark. It also seems rather reckless to keep these supposedly dangerous items in one place and at their home, after all that plan didn’t work out so well for the Ghostbusters. It also might be considered poor parenting to risk exposing your child to all these dangerous objects and you just know that at some point the Warrens' daughter will end up in that room.