The Company Of Wolves DVD Review 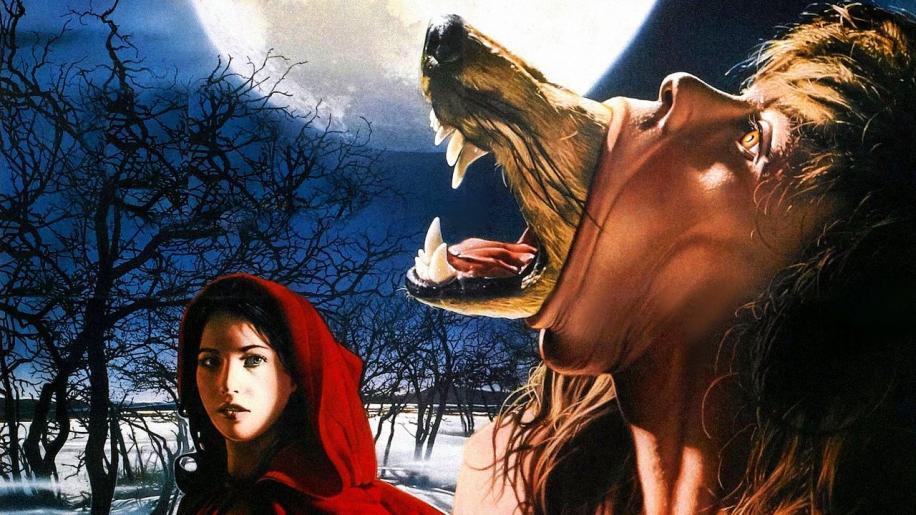 The Company Of Wolves hails from 1984 and, although, I've seen several different versions of it - at the cinema, video and on TV - I can safely say that this edition is the best of the lot, in my opinion. But don't expect anything too grand, because the print is mired with a thin smattering of grain, a few little pops and nicks and flashes encroach upon the image, and the whole picture is a tad on the soft side. However, for the most part, the anamorphic 1.78:1 transfer is more than acceptable. Colours, for instance, are particularly strong - the reds especially, such as Rosaleen's cloak and hood, the blood in the snow or beneath the latex skin that Stephen Rea rips from his face, the berries, the wolves' glowing eyes - and there is a very pleasing warmth to the palette that really bolsters some of the interior scenes lit by candle and firelight. The forest sets can look quite detailed and colourful at times, as well - the mesmerising rainbow shaft that cuts through it at one stage - but there are also many occasions when the grain seems to intensify during some of the supposedly exterior scenes and moments when detail is lost behind some murkiness in the frame.

A nice element can be found in many of the close-ups, though. Faces, particularly, can look very fresh, detailed and natural. Rosaleen's or Granny's face lit by the fire, for instance. Or, perhaps more especially, the face and eyes of the huntsman as he sits in the rocking chair, licking his lips in anticipation of his fresh young visitor. Blacks are strong and the film features many instances when shadow-play is marvellously enhanced with the depth and stability of such darker portions of the screen. The scene of Stephen Rea's travelling man returning to his marital-home in the night looks very nice - the veil of mist curling about the middle-distance and his straggly-haired figure, swathed in shadow, creeping up the stone steps with just the bare minimum of facial detail on show. Pin-pricks of distant light come over well, such as the orange glow emanating from a cottage window in the woods, or the line of flaming torches carried by the villagers on a wolf-hunt. Contrast is perfectly acceptable with the frame containing impressive combinations of light and dark at the same time.

Detail within this transfer can vary, but for the most part it is actually very good. Look at the muscle and sinew definition on Stephen Rea's wolf for instance, or the singed flesh on the huntsman's palm after Granny swipes at him with a red-hot poker. The sets can often look great, with fine leaf, branch and tree integrity, but then the next scene, or the next shot, for that matter, can become cloaked with grainy softness. But this is still a very agreeable transfer on the whole. Edge enhancement, though still evident, is not problematic and I encountered no smearing, blocking, pixilation or over-saturation. Those reds are meant to stand out from everything else. Perhaps it was too much to hope for a full surround mix to have been created for this film. But, we have to remember that The Company Of Wolves wasn't made with multi-channel surround sound in mind. Although, part of me can't help but mourn the fact that, even if the rest of the track was frontally-based, something like the howling of the wolves or just the pounding of George Fenton's music could have reached around behind us with a bit more presence and precision than this Dolby Surround mix allows. That said, there is still plenty to enjoy with this track.

The pipe-organ that strikes up as Alice runs through the nightmare forest and the thunderous percussion that Fenton uses to signify the wolf-pack are standouts. The stereo spread across the front is very good, sounding wide and expressive. Separation is fine and allows for some discrete steerage of effects, although the film doesn't really attempt too much in this department. Dialogue is clear and crisp and the score is projected with warmth - lilting at times, frenzied at others, but always layered and supremely reproduced. Little things like the crackle of an open fire, the creaking of old wooden doors, birdsong and the pattering of earth on a coffin lid are well presented too. The occasional gunshot is hardly earth-shattering but the effect is still fairly meaty. The howling on the track is treated as ambience for the most part but is suitably eerie and well-placed within the mix.

Apparently, there are French and German editions of the film that have 5.1 mixes incorporated, but I haven't heard a good word said about them, to be honest. So, until an HD or BD version strays out from the woods, this is possibly the best we will hear the film. And it is pretty good, all things considered. There are a couple of things of note with this release. The first is the fantastic commentary from Neil Jordan, revisiting the film properly for the first time in twenty years. I say properly because, as he states in the detailed and insightful track, that he actually managed to catch the movie on some channel or other just before recording the commentary and being very impressed with it. Now, however, with questions asked by Robert Ross, he is able to dissect the creative process and the motivations that led him and Angela Carter to turn the story into a movie. He addresses the subtexts and the metaphors and the symbolism at every opportunity, gamely supplying his take on the often perplexing imagery on show. Quite technical at times, with regards to the filming process and the editing, Jordan is also rather frank and honest about the lack of budget and the quality of some of the effects work (he really doesn't like that elongated tongue!). He is praiseworthy of his cast and expresses many platitudes on them and the crew for coming up with such impressive results on a shoestring and offers some fond anecdote and reminiscence. Nice line about the Francis Bacon/burn-victim style of wolfman mid-metamorphosis look for Stephen Rea, too.

The booklet, entitled The Company Of Wolves - Behind The Scenes Dossier is actually very good indeed. Comprehensively looking at the ideas and work produced by Angela Carter and how they were received and then translated into the screenplay and the final movie, the booklet then moves onto the themes of the film and the characters and cast who portray them. Lavishly illustrated with some fine stills from the film, this is a great little addition to the release. Of course, it is no substitute for a full-on making of, which this movie so richly deserves. It would be great to see Sarah Patterson now and hear some of her thoughts about the role and how deeply she associated with it at the time. Ahh, well ... perhaps when it finally gets to HD or BD, eh?

We also get the theatrical trailer and a stills gallery. The latter presents us with a number of actually rather small stills from the film and from behind the scenes. Nice, but not exactly something that you are going to savour, I'm afraid.

The film also comes packaged in a striking steelbook that has a nice silver cast when caught in the light. I recall the movie debuting and receiving much trumpeting from critics lauding its artistic approach and celebrating the resurgence of British fantasy cinema. Something about the film is deliciously intoxicating and, although it was hardly the rampaging werewolf story I had expected to see, The Company Of Wolves still held me spellbound. On video it became a firm cult favourite and even if this DVD incarnation has been a long time coming, it is still very well worth seeking out. I don't yet know of an HD or BD release on the horizon, though that would, of course, be something to savour. As it stands now, the film has a fine transfer and some nice extras - with the best being, unquestionably, the wonderful commentary from Neil Jordan.

The director leapt into the equally elegant and literate Interview With The Vampire (again based on a female writer's highly literate work) with similar imaginative scope and a lushly baroque visual and emotional sensibility, but it is to his tale of werewolfry rather his sensual ode to vampirism to which I would rather return. The film is witty, menacing, magical and probing. It rakes its claws through established folklore and societal moral constraints, exposing the raw deceits and frightening disinformation that lie therein. Very highly recommended.