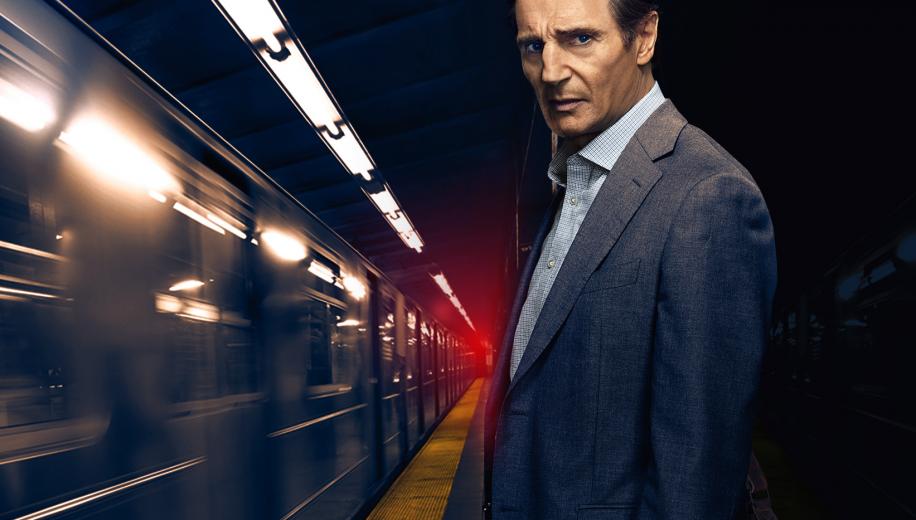 Neeson's ex-cop insurance salesman gets an unexpected surprise on his commute after having just been made redundant, bumping into Vera Farmiga's mysterious stranger, who promises him $100,000 if he finds a man on the train who has stolen something that belongs to her. Tempted by the money, his morality soon kicks in, at which point he loses the carrot and is given the stick - his wife in jeopardy - turning him desperate to solve the puzzle with lives on the line and time running out.

Infused with a pure Hitchcockian premise, The Commuter gets off to a great start (not wholly unlike Neeson's Non-Stop), building tension as his increasingly desperate everyman hero tries to get to the bottom of the mystery on the train, finding his every attempt to deviate and escape foiled by a seemingly omniscient power - Farmiga's stranger - who makes it very clear that any such attempts would be met with violence.


B-movie Hitchcock all the way.

Running at a lean 105 minutes, The Commuter trades in healthy mystery and rampant misdirection, and whilst those familiar with the genre will likely be able to see some of the twists and turns coming, there's just about enough here to keep you engaged, with Neeson placed in increasingly precarious situations that certainly require more than their fair share of suspended disbelief, but also provide some decent entertainment, at least at a visceral level.

It's undeniably b-movie Hitchcock all the way, frequently bordering on silly but just about held together by game performances, and by a director who knows his way around a solid mystery thriller. Jaume Collet-Serra (who worked with Neeson on some of his slightly better post-Taken films, like the aforementioned Non-Stop and also Run All Night) may have turned in his most accomplished thriller with the very effective little Blake Lively shark thriller The Shallows but, apart from Unknown, his Neeson vehicles have never been less than watchable. This is no exception.

There's a nice uptick in detail over the corresponding 1080p/AVC-encoded Blu-ray, bringing further life to the shadow nuances, affording greater background texturing and finer skin flourishes that really get into every crag on Neeson's ageing visage, and every wisp of his hair. It really is a tremendous looking film, very stylised but also quite stylish, with the modern digital cinematography allowing the image to shine with perfection.

Of course 4K is ultimately all about the HDR and WCG, although their usage is organic and subtle here, bringing forth richer colours, from skin tones to the uniform decor of the train and the weathered metal exteriors. Black levels are deeper and stronger, with no signs of crush and there's little to quibble about on this excellent image.

The Commuter's 4K Ultra HD Blu-ray release comes complete with a Dolby Atmos immersive audio track founded upon an already impressive Dolby TrueHD 7.1 track which is, in itself, demo and reference quality.

Even though not wall-to-wall action, The Commuter trades in a perpetually excited state, with initially incessantly building tension ably assisted by the score, before the increasing frequency of action sequences snowballs into effects-laden bombast.

Dialogue remains firmly prioritised across the frontal channels, although some rear activity picks up the other conversations on the train, and indeed the claustrophobic metal cannister setting gets some keen observations in the array, which really puts you onto the packed train, complete with persistent track noises and, as stated, in the latter end, some more explosive punches.

The score provides solid accompaniment to the production and gives the surrounds yet more to play with, and with strong LFE input it's near-perfection.

Nothing but a short Interview and Featurette that don't even make it to the 4K disc itself.

The Commuter is an enjoyable enough final chapter in Liam Neeson's action career, making you wonder whether this really has to be the end of the line.


A very good package for fans to pick up.

The Commuter's UK 4K Blu-ray release delivers excellent full-fat native 4K video and Atmos-enhanced audio, as well as a couple of extras just about keeping this release from being bare bones. It's a very good package for fans of the film to pick up.