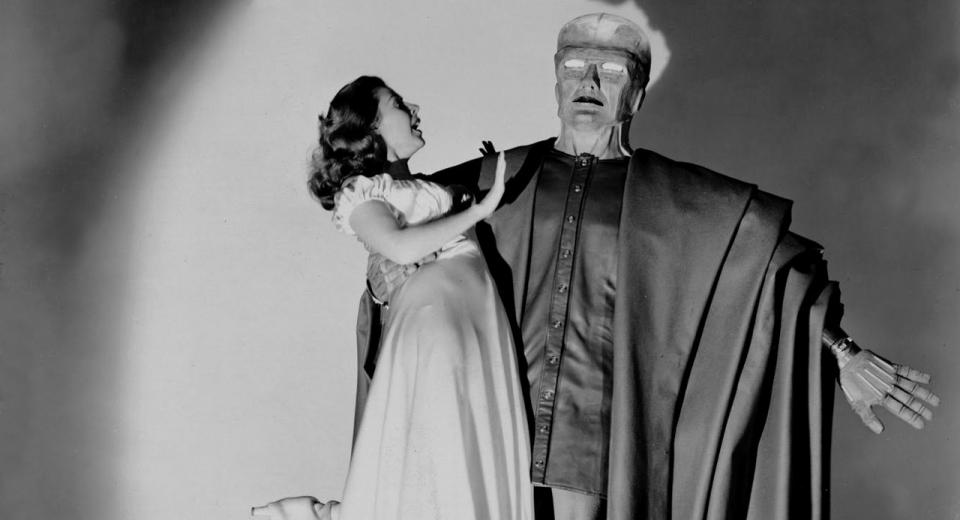 As I have already said, Olive Films present their hi-def material without any recourse to DNR, edge-enhancement, boosting or even much, if anything, in the way of original print restoration. Now whilst this may well mean that pops, flecks, wobbles, nicks and occasional discolouration may well still be in evidence in the image, there is also lots of natural grain and a proper film-like texture.

Colossus of New York has a 1.78:1 aspect and is presented on disc with an AVC encode, and it has a remarkably good print. There are only occasional frame judders, and they are very slight. Actual damage is few and far between. Grain is light and consistent. Only the stock shots of the Hudson River at night, a factory assembly-line, some footage at the airport and a few library images of New York buildings betray the vintage of the era. Otherwise, the transfer is extremely rewarding and the resulting picture is quite impressive.

The film was shot in black-and-white and director Lourie and DOP John F. Warren were aiming for a very distinctive noir-cum-horror aesthetic of copious shadows and a sinister dark frame. To this end, the contrast is excellent. We have deep shadows, solid blacks and a smooth and reliable slide to grey. White elements do not bloom or shine, and the distinction between light and dark is studiously maintained. There are still some more conventional SF elements thrown liberally across the screen that like to dazzle. The Colossus has the power to unleash crackling laser beams from his eyes, and when he does so, the transfer enables these to blaze with fierce, white-hot streaks of fizzing sparks and lightning. These animated shots are nicely intergrated and look very good indeed.

Detail is wonderful. Brickwork, leaves and foliage – near and far – are always well defined. The weave in clothing – the men’s jackets and suits, Anne’s dress with its sheer shoulders – all reveal finite material with clarity. Faces and eyes yield lots of minute detail too. Look at the clarity of the text on the promotional film that Henrey plays for Jeremy at the start, or the print on the newspaper. Mid-ground and background information is surprisingly well presented right across the board. Only the occasional shot appears less sharp, and frame-edges rarely seem faded.

Although the source material was obviously in good nick, this is an excellent transfer. Wow! This is a great audio track.

A seemingly plain and very simple DTS-HD MA 1.0 mix provides Colossus with all it needs to convince you that a nine-foot robot is clanking about New York and the United Nations building. The soundstage may be limited and the design vintage but all of Lourie’s ambition is very well catered-for with a mix that allows for sizzling, fizzing laser-beams and sparking circuitry. There is an amazing level of depth and vigour to the track. We might only have one channel to play with, but there is a wealth of detail incorporated into it, and a definite impression of positioning taking place.

The only crackly thing about this track is Jeremy’s voice emanated from the robot – but this is completely intentional and wonderfully achieved. It sounds like a distant broadcast heard over an old wireless-set, complete with distortion and pitch-bending. During his “awakening” scene, his voice climbs and warbles all over the place, and the track has no problem keeping up with it.

There is a lot of loud activity on offer too. There’s the clanking boots, naturally, but listen to the chaotic shattering of glass as the Colossus wrecks the laboratory, or smashes his way through the glass wall in the United Nations building. Contained within this cacophony is plenty of intricate detail, the mix eagerly hurling concise aural violence about. Gunshots sing out with a hearty and guttural bark, and those sizzling laser-beams sear out of the speaker with demonic, scratchy glee. A tremendous impact takes place towards the end, too, and this really hits home with a smart bass thump – solid, thick and shuddering.

The unusual, piano-led score has plenty of clarity and weight to each ponderous note, and fine distinction to the lighter, faster passages. Dialogue from the rest of the cast is always crisp and clear at all times.

Old mono tracks that sound this good are relatively few and far between. Robinson Crusoe On Mars offers another outstanding sonic experience from relatively limited source – and Van Cleave delivered the score for that, as well. Sadly, as with the majority of releases from Olive Films, we have nothing extra. Olive Films should be praised for bringing such genre gems to hi-def, and they’ve done brilliantly to provide us with William Alland’s latter-phase SF double-bill of Colossus Of New York and The Space Children. Here, we have looked at Colossus, which is the better film, and found the 70-minute, so-called “programmer” from director Eugene Lourie to be a powerful, exciting and surprisingly mature affair whose psychological noir attributes deliver ample mood and menace to go along with the addictive pizzazz of seeing brains kept alive in chemical tanks and nine-foot tall rampaging robots with laser-beam eyes.

Their transfer is solid and faithful. The imagery in Lourie’s film is strong and the AVC encode does well with the inky shadows and screen-igniting ray-beams. Definition is terrific. The audio acquits itself excellently too, with detail, clarity and vigour. Van Cleave’s ominous piano-led score comes over with a deliciously sinister vitality and those screeching death-rays sound accurately disturbing and, well, perfectly screechy.

The lack of any extras is unfortunate, but this is a rarely seen movie that has found its way onto Blu-ray with a barnstorming transfer, and that is certainly something worth shouting about.