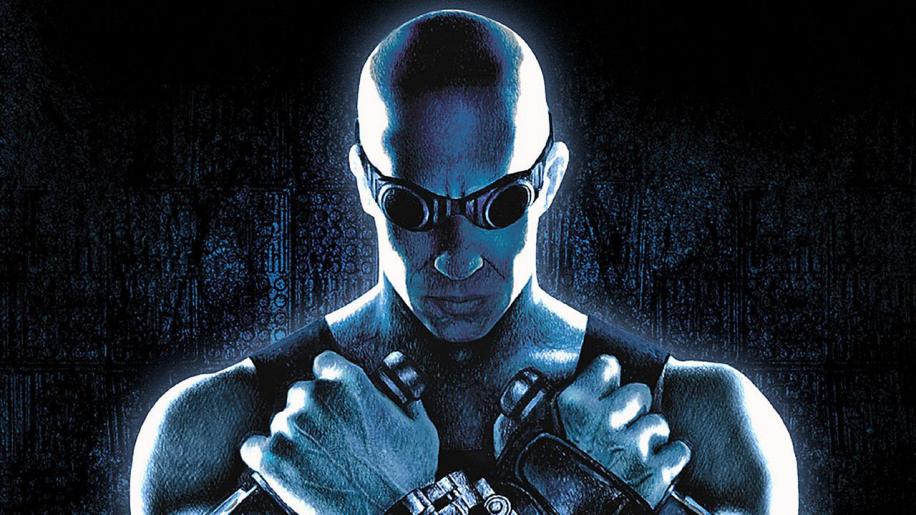 Switching between high contrast shots tinged with the colours of the three stars, fearsome shots during the crash sequence and the pitch darkness of planetary eclipse, this is a tough movie to encode. Filmed in 2000 and with the bright contrast bringing film grain to the fore, the transfer here is pretty fine. Colours are excellent with the crash sequence being visually breathtaking, bathing the doomed freighter in a spectrum of reds and oranges. The picture quality (and level of visual effects) are maintained as we progress from the awe inspiring shots of the planetary rise right through to the titular pitch black. Encoding artefacts are not troublesome and the original print does not seem to suffer from any overt damage or (non intentional) colour balance problems. Very good.

Right, disappointment out of the way first. Those of you wired for DTS are in for a huge disappointment. The DTS track available on the Prior US release is not present here. Instead we have two commentary tracks (see below) and a rather cracking Dolby Digital 5.1 mix. Beginning with Vin Diesels slate like narration and moving through the thunderous crash sequence, the mix never sounds muddy. Dialogue is crisp and well delineated whilst Graeme Revell's music manages to enhance the eerie atmosphere. Sound placement is also superb with the soundtrack reinforcing the aliens presence in the total darkness.

The main extra fans will be interested in is probably the first they'll see. On inserting the disc you are treated to a “preview” of the upcoming (to the UK anyway) sequel; “The Chronicles Of Riddick”. Featuring the first 9' 23” of the movie this is also available from the “bonus” menu. Presented in 2.35:1 letterbox and with Dolby DD 2.0 audio, its safe to say this will get fans of the original movie booking their seats for the sequels release later this month (27th of August 2004 for those of you reading an old review). This really sets the scene for most of the extras found on this set. Mostly revolving around the production and promotion of the sequels (including the animated “Dark Fury”), little time is devoted to the original film which is a little disappointing given this sets “special edition” tag..

”An Introduction By David Twohy” Introduces the screenwriter/director of the first movie apparently hard at work editing the sequel. This is fortunate since it is all he really discusses throughout the piece. Only touching upon the original filming (which was apparently handled by an overworked and underpaid team) when discussing the change in emphasis and expansion that the new movie represents. Staying with the promotional theme, we have ”Dark Fury: Advancing The Ark”. This is a promo piece introducing “The Chronicles of Riddick: Dark Fury” the animated prequel to “The Chronicles of Riddick”. Attempting (not quite successfully) to bridge the gap between “Pitch Black” and “The Chronicles of Riddick”, the animated adventure is discussed by head animator Peter Chung who discusses the changes and extensions made to the universe of Riddick. With the exception of a trailer for the new upcoming movie (and of course the first 9 minutes of the movie itself) the final entry on our promotional tour-de-force is ”A View Into The Dark”. This is actually quite an interesting featurette. Running for just over 4 minutes and featuring Riddick (Vin Diesel) himself, we get to take a peek at the filming and the changes that alter and expand the character of Riddick in the next movie.

Closing up the list of promo pieces is “The Game is On”. This is a trailer for the new Riddick video game (in which you have to escape from a maximum security prison) and continues the trend (started by “The Matrix”) toward stories being spread across different media. We also have trailers for “Van Helsing” (the live action movie not the animated prequel) and “Thunderbirds”.

I promised you there were extras here regarding the original movie and here they are. Well, sort of. We start with “The Johns Chase Logs”, these are the fictional logs of the mercenary Johns who captured Riddick before the beginning of the first movie. Spread over 17 “entries” which can be either played together or dipped into, we hear how he tracked down Riddick and get a peek into the route of his addiction. This is a nice option which whets the appetite for more information on the mercenaries, characters who become more important in the animated “Dark Fury” and the upcoming sequel.

”The Making Of Pitch Black” runs for 4' 42” and is probably the most “in depth” feature regarding the original movie in this set (apart from the commentaries - more of those in a second). Featuring David Twohy as well as cast and crew members, it touches upon the way in which the aliens are presented (what you don't see can be scarier than what you do see), the unexpected reversal of expectation that our characters undergo through the film as well as the strain the Australian shooting schedule and desert location (Coober Pedy) placed on the production. This is a fine little featurette for what it is, but the problem here is exactly that it does “touch on” the subjects. Where is the long documentary on the making of this movie or the creation of the special effects (including some very well constructed aliens, stunning planetary visuals and a visually stunning not to mention ear bending crash sequence)?

As I mentioned above, the disc features two commentary tracks both of which are also carried as subtitles. The first features David Twohy and stars Cole Hauser and Vin Diesel and the second again features Twohy this time with the movies producer Tom Engelman and visual effects supervisor Peter Chiang. These are, I believe, the same commentaries found on the 'R' rated American region one edition. Of the two commentaries, the second is the most interesting especially when discussing the construction of the aliens and other effects. The actor led commentary is also pretty good but whilst it's an interesting, well balanced track it can be a bit tiring at times and I found myself itching to switch back to the main audio or the effects tracks. Finally (and I mean finally, there are NO trailers for the original movie present here) we have ”The Chronicles Of Riddick Visual Encyclopaedia”. This only avoids being a promo piece by the skin of its' (alien) teeth. It's essentially a preview of the complete version that will be available on the DVD release of the new movie (which is a little trying for us in region 2 land, the R1 release is expected in December 2004). Allowing access to production art, drawings and information from the “Riddick” universe, it's voiced by Cole Hauser (William J. Johns in the movie). Unfortunately this is just a taster and it looks like the serious content will only be available when the next movie is released on DVD itself.Boo, hiss.

Excellent picture and sound quality (unless you're a DTS convert) but with a very poor set of extras (bar the commentaries and opening 9 minutes of The Chronicles Of Riddick). An original spin on the aliens / sci-fi / slasher / horror movie, this is definitely a keeper but it's a real shame we couldn't have had the extended directors cut (as with the region 1 unrated edition), some decent making of features and less space devoted to promoting the upcoming sequel.