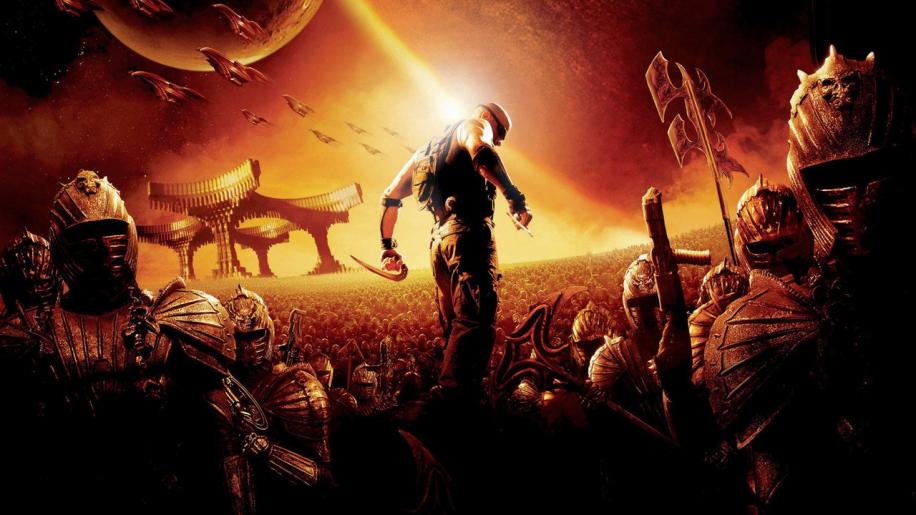 The Chronicles of Riddick Special Edition is presented with in anamorphically enhanced widescreen 2.40:1 aspect ratio. The picture is superb as is to be expected from a high-budget, CGI biased recent release. I have absolutely no technical criticism of the transfer other than one moment of edge enhancement I noticed when two characters were talking, silhouetted in front of a lighter background, but that was only spotted because I was being picky.

David Twohy introduces the film with a note about the editing of the extra footage and how they had to create frames to splice this in seamlessly. There were a couple of moments where I thought I saw a kind of frame judder which I assumed were these moments, but if you blink you'd miss them.

A picture to show off your system for sure!

The main track is an English Dolby Digital 5.1 mix. There is a DTS version available on the Japanese R2 release, but I was very impressed with the soundtrack offered here. There wasn't a massive amount of rear action, but the obligatory space flight scenes provided an excellent work out for the rear channels as they panned back and forth. There was plenty of bass, especially in the fight / action scenes and Mr. Diesels growling voice was given plenty of richness as well! There is also a dubbed Hungarian 5.1 soundtrack.

First thing that strikes you when you pop either disc in are the nice animated menus (apparently the same ones present in the standard DVD release). Although they look great, they can become annoying when you are navigating back and forth because the animation is quite slow and cannot be skipped.

. As with most movie commentaries you probably have to be a fan of the movie or seriously into the film making process to get the most from these, but this is one of the more accessible ones out there, with the three individuals merging well to provide anecdotes and trivia from both behind and in front of the lens. There are periods where the interest levels of the speakers drop leaving some gaps but generally its good throughout. Intro By David Twohy (00:48)

This also plays at the start of the movie and basically just welcomes you to the directors cut and forewarns you that you may notice where the extra footage has been spliced in. Not really an extra, but it is listed in the extras menu so I've included it for completeness!

There are three deleted scenes, that can be played with or without the commentary / subtitles. Twohy explains the justification for these scenes omission in his commentary and most of them were cut because the information they were providing could be gleaned through other scenes in the film.

Riddick Insider Facts on Demand This is an enjoyable little feature - especially useful when listening to the audio commentary. It provides a pop-up overlay (above the subtitle area) with scene-specific background facts and trivia that is displayed as you watch the movie. As someone new to the Riddick world, I found the information useful in filling in the back-story of some of the characters and the worlds they inhabited. It is something that I hope to see incorporated into more releases in the future as it is simple yet very effective. Disc Two extras

Virtual Guide to the Chronicles of Riddick A very swish multimedia presentation taking the form of a virtual console, where the various characters (except Riddick) talk briefly about elements from the story that involve their character in 30 second clips.

Again, another virtual console type display that plays bounty hunter Toombs audio diary as he hunts for Riddick - setting the scene for the opening of the movie. Provides a bit of background filler to the Mercs story.

This featurette covers the visual effects used for shooting the scenes on Crematoria, Aereon and the Hell Hounds. It also has the usual input from visual effects supervisors and other crew members. There are some good breakdowns of how the CGI was implemented using green screen technology. It's a shame there wasn't more information on the technical aspects of the effects used here as 6 minutes doesn't do a movie like this justice.

Riddick's Worlds There is a brief guided tour (3:12) by Vin Diesel of the main sets used in the film or alternatively you can view 360 degree panoramas of 8 different locations (The Basilica Centre Floor, Helion Fountain Square, Crematoria Main Hangar, The Lord Marshal's Theme, Imam's Living Room, Quasi's Grotto, Planet UV6 and the Slam Centre). This sounds better than it is as it is just a series of static photos which you can click left or right on (i.e. it is not a virtual panorama that you can actually control such as you sometimes see on websites). Still it's interesting to get a look at the locations from a different perspective.

Another featurette, this time focussing on how the writers came to develop the worlds where this story would be taking place. It also pads out more about the characters including the sight of Dame Judi Dench being flattered that Vin Diesel would want her in one of his movies (hmm, shouldn't that be the other way round Ma'am?!). This featurette also has brief information on some of the props, sets and set pieces. It was one of my favourite extras in this set. Again, I wished it was longer though.

Yet another featurette, initially covering the character of Riddick and his development from Pitch Black into this movie. The featurette then moves on to provide more behind the scenes footage, interviews and discussions with the various cast and crew.

Keep What You Kill (17:31)
This featurette focuses on the world of the Necromongers - covering the main bad guys, their motivation, their world, set design etc. Once again features interviews with cast and crew and behind the scenes footage. The featurettes on this disc, when combined do cover something for everyone but do suffer slightly from overlap but are entertaining nonetheless

The Interactive Production Calendar is another innovative if slightly fiddly multimedia presentation. You are able to navigate through the 3 month production calendar as if you were at a virtual console. In real terms you have dozens of 30 second clips to play through unravelling behind the scenes footage or info on the shooting process. A novel feature that I hadn't seen implemented like this before

The Chronicles of Riddick surprised me and goes to show, you should make your own opinions of a movie - I was pleasantly surprised to find myself entertained throughout this movie - good actors, great set design, impressive CGI and an expansive storyline. This Special Edition DVD takes a good film and makes a great package, with a variety of interesting, innovative and informative extras. Both the film and the extras are given high-class presentation and gives this package a feeling of quality