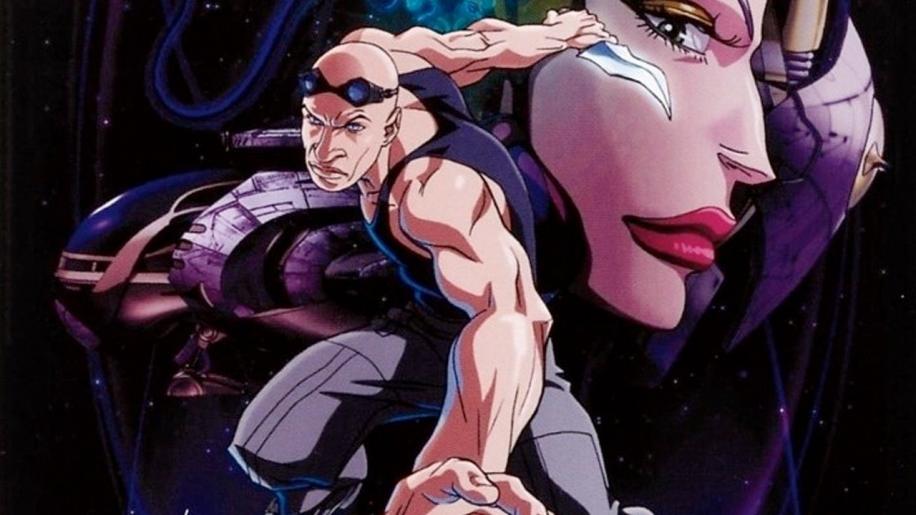 I was somewhat confused when I plugged this disk in. All the information I had previously found when researching this release stated that it was 1.85:1 anamorphic widescreen and, indeed, the menus and universal trailers are. Unfortunately the main movie (well, at 33 minutes 'programme' may be a better description) was definitely non anamorphic 1.85:1 letterboxed video. This is a great shame since there are some wonderful examples of animation in this short and the need to zoom in to fill a widescreen set or projector screen reduces the quality of the picture. The transfer itself is good (for non anamorphic video) and features some wonderful use of colour, especially during Riddick's fight with the Skrill. No banding, macro blocks or other unwanted digital artefacts are evident and the original source seems to have been problem free too. Thankfully the sound is somewhat better. Carrying a Dolby Digital 5.1 track, “Dark Fury” has a reasonably theatrical mix with plenty of well placed effects making good use of the split rear channels, bass fans will be suitably happy as well since there are some serious LFE effects included such as the “bloodhound” used to track Riddick (its footfalls could level your screening room if you have a suitably large sub), but as a whole it is a little variable and slightly lacking in subtleties. The opening sequence (featuring the distressed shuttle) starts the movie off on a high note, with alert klaxons and warnings bouncing around the channels this is followed up by some top notch sound placement in the zero-g battle but the general effects of the giant merc' ship are a little flat and the sound only seems to really wake up when an action scene is playing out. With the main programme taking up so little time I thought we may have a disc loaded down with extras. After all, with the upcoming sequel due in cinemas in the UK this year, the possibilities for a behind the scenes special (a-la “The Matrix Revisited”) must be pretty high. Unfortunately we don't get anything like that.

On offer here are four featurettes, a trailer for the Pitch Black game and a trailer for the “Van Helsing” animated prequel. Anyone expecting a trailer for “Pitch Black” or “The Chronicles Of Riddick” is going to be disappointed too as neither are present. Of the features that are here “A View Into The Light” offers up the most information on the development of Riddick, as it takes a look at the role he will play in battling the Necromongers (the new bad guys) in the next movie. Featuring some cast and crew interviews and on-set filming, it's a step above “Making Dark Fury - Bridging The Gap From Pitch Black To The Chronicles Of Riddick”. Despite having one of the longest titles of any extra I've seen, this is more about the design and animation that went into “Dark Fury” than the upcoming sequel. Irritatingly, it also hints about the changes Riddick faces and how important he may be to the galaxy but none of this is touched upon in the short itself.

“Peter Chung - Into The Mind Of The Animator” touches upon the inspiration and concepts that the head animator blended together to design the look of the new ship, characters and places we meet in “Dark Fury”. This leads us nicely into “Dark Fury Animatic”. Here we have the whole movie presented as animatics and accompanied by a Dolby Digital 2.0 soundtrack. This is an interesting opportunity to see the differences between the original “concept” art and the finalised animation. It also highlights a subject that Peter Chung discusses in his feature, namely that ideas get changed as the animators pick up concepts and animatics and “run with them”, changing the composition of scenes and moulding the animation to the style of the action being depicted. Although it's good I really think it would have been better if it were possible to switch between the animatic and the “full version” (or at least see both in a split screen feature) in order to compare the concept with the finished feature, a commentary track would have been nice too. Ah well.

The disc is closed out with trailers for the Hugh Jackman animated prequel “Van Helsing” and the “Pitch Black” Vivendi computer game. A difficult one to call. On one hand it's very nicely animated and will appeal to anime' fans and those who enjoyed Pitch Black (as well as Vin Diesel fans), but the running time of the main feature is woefully short. Even taking into account the extra features (which also have a second bite at the main feature in the form of an animatic version), the whole disc will only take around 90 minutes to go through. Added to a non-anamorphic transfer and less than mind-shattering extras, I would say its definitely worth a rental but I'd have trouble recommending it as a full price purchase.