The Chronicles of Narnia: The Lion, the Witch and the Wardrobe DVD Review 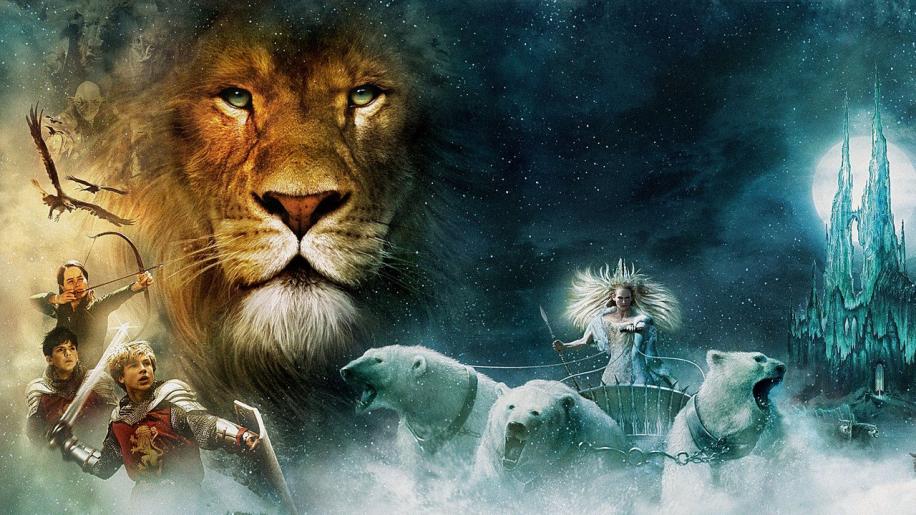 Narnia's anamorphic 2.35:1 image is nice and wide and makes fine use of the aspect to deliver a picture that is visually packed with engrossing detail, and a huge canopy upon which to deliver its spectacle and action. It may start off with smattering of slight grain that flutters about in the darker regions of the image, but this is whittled away once the fantasy elements creep into the film and the children pass over into Narnia.

Colours aren't quite as sharp or as bold as you might expect, although this is actually down to the somewhat muted palette that Adamson had employed, which drains a lot of the vitality out of the picture. Once the wicked winter has been defeated, though, we get a pleasing degree of warmth that pervades the image, bringing a lot more primary colour into the proceedings. But, even then, the impression is stark, rather than vivid. Skin tones are naturalistic and eyes sparkle which, at least, breathes life into the real characters, but the reasonably high definition has a habit of revealing the beasts and creatures in all their computer-generated phoniness. Night-time scenes exhibit a firm black level, and the nasty occult-style ritual sacrifice sequence is well composed with detail, keen shadow and smartly rendered flickering flames. The disc holds the many crowded scenes with clarity, and fast action, showcased with the big battle, is always captured with stability and a sharpness that brings even distant figures into relief. That said though, I do think the overall image is a touch soft.

Transfer-wise, Narnia doesn't appear to harbour any digital glitches such as excessive edge enhancement, blocking or over-saturation. I didn't notice any compression artefacts creeping about, either. Overall, this is a very good transfer, the only complaints I may have concerning the original photographic choices that the filmmakers made. I can see that Adamson wanted a realistic hue brought in, but I can't help thinking that the resulting film suffers from a blandness that it didn't deserve.

Well the good news here is that the DTS track on offer is absolutely wonderful, trouncing its DD 5.1 counterpart in every way. Very rich, very full-on, the mix is totally immersive and dynamic. Featuring an extremely wide spread across the front and a marvellously extended use of the rear speakers, the film is very energetically reproduced and allows for a terrific aural experience.

The LFE packs a punch the opening blitz scenes, the ice-wall crash and the final battle has plenty of meaty wallops and impacts. Steerage has arrows zipping around the set-up, the thunder of charging hordes sweeping forwards and the cacophony of sword-clanging mayhem emanating realistically all around the room. This really is an impeccable and rousing track, whose aggression is matched effortlessly by pin-sharp high ends, crystal-clear dialogue and a warm, engrossing delivery of Gregson-Williams' admittedly naff score. Even the little effects, such as the distant tinkling of sleigh-bells or the ambience of jumbled voices in a crowd, are well picked out and placed within the soundscape. Listen out for the cracking of the ice in the Witch's palace that creaks and groans from all around the speakers throughout any scene depicted there - very atmospheric.

The 2-disc release was hardly a shabby affair, but this edition goes many leagues beyond. Top of the list of extras would have to be the inclusion of a feature-length film from Disney that chronicles the life and times of Narnia creator C.S. Lewis. But, for the record, this release includes -

Disc One carries two commentary tracks, a blooper reel and a pop-up trivia track from Lewis's stepson Douglas Gresham. The first commentary, from Adamson and his four child stars, has an occasionally strange atmosphere to it, which stems from having a child-like director giggling away with a bunch of kids who all act as though they have much older heads on their shoulders. However, the track is still very good indeed. Despite a few pauses along the way, the group remain steadfastly scene specific and heap anecdote after anecdote as they tumble their way through many great recollections. William Mosely keeps getting his visual effects mixed up and has to be corrected by a chastising Adamson - “You can tell that's CGI,” he might say only to be instructed that isn't, “It's a composite!” by his director. But, overall, I found I really enjoyed this track and warmed considerably to the actors. And it is certainly a lot better than the dry technical second commentary from Adamson again, with contributions from production designer Roger Ford and producer Mark Johnson. Finely detailed and comprehensive, it lacks the vitality of the much more spontaneous first track.

The Blooper Reel lasts 4.35 mins and has some smirk inducing asides but it definitely a once-only viewing.

Disc Two seems to replicate the second disc on the earlier release. Under the heading of Creating Narnia, we have three sections. Chronicles Of A Director (37.57 mins) is a very good, touch-all-bases type of affair that predominantly revolves around Adamson. The Children's Magical Journey (26.00 mins) reveals via a lot of on-set footage, interviews and background gubbins, just how much enthusiasm there was for the project from all concerned. Georgie Henley is one of those bizarre child performers who seem far, far older and wiser than she really is - there is such a mature and articulate voice bubbling from that pudgy little face. She, along with the other members of the young cast, is actually far better and believable to listen to than most adult actors in their highly pretentious and smarmy making ofs. Evolution Of An Epic includes C.S. Lewis, From One Man's Mind (3.50 mins), which tells of the genesis of the books, Cinematic Storytellers, which covers the work of Weta Workshop, the costumes from Isis Mussenden, the roles of the production team, Dan McAlpine's photography and Harry Gregson-Williams' score and lasts for 55 mins with a Play All, and the terrific Creating Creatures (53 mins with a Play All). This last segment covers makeup, costumes, CG and conceptual artwork for many of the beasts and creatures in the film. Really good stuff, folks. This gives a detailed background for each subject with copious interviews, design work, on-set and behind-the-scenes footage. Best bits cover the Minotaurs, Centaurs, Aslan and the wolves.

Anatomy Of A Scene: The Melting River (11.30 mins) is a detailed look at how the sequence was planned, prepped and produced. This is a terrific set and must have been great fun to act on. We see rehearsals, the actual shooting of the sequence and then the CG augmentation.

Disc Two also has Creatures, Lands and Legends which supplies much more background and mythologies for the many varied creatures of Narnia, an interactive map of the magical kingdom in Explore Narnia and a timeline for the events depicted in the story with an audio narration, called Legends in Time.

Disc Three contains the new Disney-produced feature-length documentary chronicling the life and times of C.S. Lewis. With eight chapters and a running time of almost 75 mins, this is really amazing value. Called C.S. Lewis: The Dreamer Of Narnia, this rattles along under a joint narration (one of the voices representing the thoughts of Lewis, himself) as each book in the series is taken in, the author's exploits in the war and later in academia and, most importantly, how his wildly swinging religious beliefs (atheist to devout Christian) collided with his fertile imagination. With a vast array of contributors, including Ray Bradbury, Ben Kingsley and numerous biographers, friends, relatives, students and academics, the feature is proudly fact-packed, thought-provoking and fascinating. It is also nice to be given a tour of Oxford and to see the various watering holes that Lewis, Tolkien and their literary pals - collectively named The Inklings - frequented, such as The Eagle And Child, or The Trout Inn further along the Thames. However, one thing that grates slightly is the amount of visual tricks that have been employed to decorate the film. With lots of animated artwork and an invasive MTV-style of editing and continually roving camerawork, the piece can sometimes feel quite jumbled and clumsy ... though, overall, I found this documentary to be very effective and rewarding, and a little inspiring too.

Disc Four contains a whopper of a making of, folks. Clocking in at 142 mins, Visualising The Lion, The Witch And The Wardrobe: The Complete Production Experience is epic and no mistake. Basically, you end up watching the film all over again, only this time, the screen is split into interviews, conceptual artwork, script adaptation and storyboarding, CG pre-visualisation, and lots of behind-the-scenes and raw footage and fabulously rich talking head dissections with cast and filmmakers whilst the film is playing along. Actually very slick and innovative, with finite and comprehensive detailing to each unfolding scene of element, this feature is right up there with the plethora of massive, immersive making ofs that are out there at the moment - ie Gladiator, Kingdom Of Heaven, King Kong, Hellboy etc - but a little more refreshing in the manner with which it gets its points across. And another good thing about this approach is that even my son, Luke (only five) found himself drawn into the background world of Narnia, whereas, for example, the production documentary on Superman Returns would just bore him, and many kids, rigid. Actually, that particular doc bored me rigid too, but that's another story.

And we're not over yet.

We get another Anatomy Of A Scene, this time seven minutes detailing what went into bringing the climactic battle to the screen. Another delightfully revealing feature.

Then, to round off this deluge of special features we are treated to a lovely section entitled Art Of Narnia Gallery. Divided into three parts - Concept Art, Landscapes and Maquettes - this is a great series of illustrations that take us a little further into the imaginative process of creating the look of the film.

Well, I may not be a big fan of the film, or even the original book for that matter, but I cannot fault the lavish attention that it has received with this DVD edition. The quality of the material to be discovered here proves to be the perfect accompaniment to a much-loved story and really goes the extra mile in taking you behind the production. Very well put-together.

Although a lavish and loving adaptation of a fantasy classic, this version of The Lion, The Witch And The Wardrobe still comes up short in many departments. But, most glaringly of all, it fails to push the appropriately magical buttons, leaving the experience unfulfilling and a tad too hollow for such a spectacular saga. The AV quality scores high for the wonderful DTS track, but the picture leaves a little bit to be desired, though I suspect that this has more to do with Adamson's photographic choices than any real fault of the film's transfer to disc.

But this release cannot fail to gain top marks for the extras which really do their best to transport you to a magical place. Immersive, comprehensive and fully entertaining, the background to the film and the original author makes me wish that I loved both this, and Lewis's work a whole lot more than I do.

For fans this is essential. For DVD buffs this is still very highly recommended indeed. Epic extras and a fluff-filled film. Top Christmas present, though.