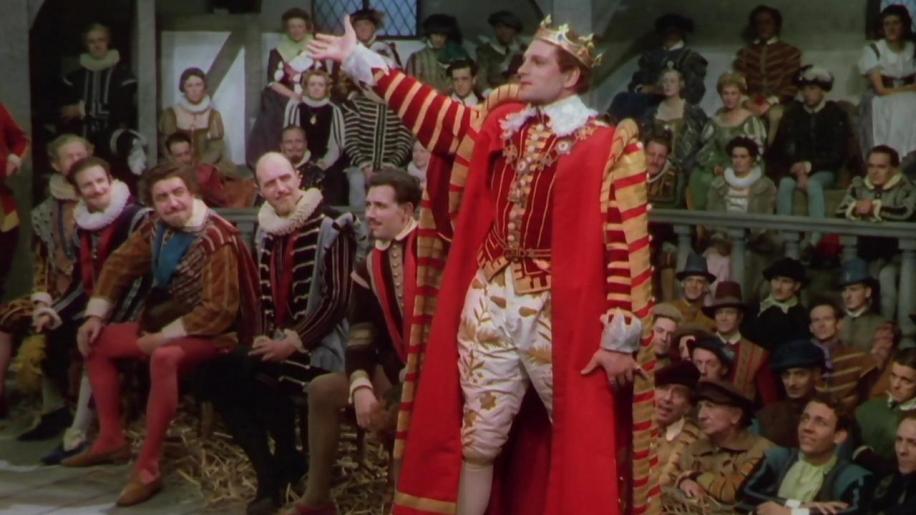 In 1943 Laurence Olivier is flying aircraft in the Fleet Air Arm services, but felt a shirker as those in authority considered him more useful for making propaganda speeches, always ending with “Once more unto the breach” to huge applause. When he applied to be transferred to operations he was summoned to the Ministry of Information and asked to make two pictures to enhance the British cause, the first being The Demi-Paradise, a film designed to help the British public warm to the Russians (even though by then they were allies in arms). The second feature was to be an adaptation of Shakespeare’s Henry V.

During the making of the first film he met designers Paul Sherriff and Carmen Dillon, the latter acting as art director. With Roger Furse, art director and costume designer, they collaborated on Henry Vto achieve a certain elusive style, neither too grand nor primitive, with Furse working on the colours to get the feeling right for the period using Missal illustrations of the Limbourg Brothers as inspiration. To some, particularly modern audiences, the set design may look slightly childish or skewed, but this perspective was exactly the desired effect, with the design being worked around the theatricality of the production as opposed to any striving for realism. Even the accomplished lighting camera man Robert Krasker found himself somewhat bemused by it, but Bill Wall the gaffer understood completely and others soon started to come round to the idea.

With Shakespeare adaptations having been often critically lauded, but remaining relatively inaccessible for the man in the street, Olivier went about the mammoth task of attempting to bring not only one of the Bard’s great works to the screen in a stylish way, but also to make sure it fitted the purpose, namely a rousing morale boost for the wartime British public. He set about this undertaking by first reducing the size of the text that was to be transported from stage to screen, cutting it from 3000 lines to a mere 1500. Many Shakespearean scholars balked at this, and even more so at Olivier’s decision to lighten the mood in certain parts, particularly the comedic turn by the churchmen in one of the opening scenes, but necessity proved to be the mother of invention for Olivier as director. The prime aim was to draw the audience into the plot and Olivier, being as au fait with the playwright’s work as any actor of his day, knew that these early moments would shape the viewer’s experience. The original text cannot be considered flawed, but for a cinematic audience it was likely to be seen as dry in places, and in order for Hal’s warring trip to France be set up correctly, the scene with the Clergy’s concerted efforts to convince the young King of his right to the French throne had to be included. Olivier performs one of many deft turns away from the text by placing in a farcical comedic element that proves to hold the attention whilst the plot is being put in place. It may not be Shakespeare as we, or the critics, knew it, but it was certainly effective.

For those of you who weren’t forced to learn the text during their education, Henry, King of England, has recently ascended to the throne and finds the coffers somewhat empty. Rather than simply levy taxes, he turns instead to the wealth of the church to fill the fiduciary gaps he finds. Upon hearing this, the hierarchy of the clergy seek to convince Hal that he has a right to the French crown, and with it all the riches that it brings. Key to the story is Henry’s wild past which earned him the name “Hotspur” as his reputation for drinking, fighting and leading a rebelliously wild lifestyle went before him. However, when duty calls he eschews his old ways and the friends associated with it in order to attempt to be a better King. The story arc in the play is multi-layered and aims its barbs in many directions, but Olivier has stripped certain elements away to give as rousingly a patriotic experience as he can to the audiences so beleaguered by five years of war.

Far from a straightforward adaptation, we enter the film as if viewing a performance of the play at The Globe Theatre on the 1st of May 1600. The sets are small, the make-up gaudy and the female roles played by young boys. What Olivier has at this point is a play within a film, complete with all the limitations it brings. As strange as it may seem, this is a perfect scenario to draw the audience into the lingo of another period and act as a transitionary phase. Chorus calls for those viewing, applicable to both those within The Globe and those at home or in the cinema, to suspend their disbelief and try to let their imaginations take over. From there we are transported to larger sets, with subtle make-up and shock horror, real women, as if we were at the very moments Shakespeare was writing of. In a strange cinematic Russian doll, we are now viewing a film within a play within a film, and all was orchestrated in order for the viewers to be able to slowly bleed into another era without it ever being jarring. Olivier keeps the simplistic yet distinctive set design spoken of earlier as an interesting halfway point between the two worlds, being to a point realistic, but incorporating strange angles and the like that could only be devised for a theatrical production. The gateway into the film proper is Hal’s decision to go to war, which shifts the focus to more film-like elements. The French noblemen, in particular the Dauphin, having shown contempt for the young monarch’s notion of birthright, mocking him by sending him a token that intimates he is nothing but a playboy sitting upon the throne. With this, the scene is set and Hal steels himself to cross the channel, put right this slight, and take what is rightfully his. The manner in which Olivier as director makes the transition of character and scene is something of a unique invention.

Upon arriving in France, Henry and his newly assembled army, lay siege to the town of Harfleur, whereupon the famous speech “Once more unto the breach” takes centre-stage. Those behind the city walls concede defeat owing to the non-appearance of the Dauphin’s army, but we as viewers are not treated to any battle sequences yet, as the transition from play to fully fledged film has not yet reached fruition. One constraint on Olivier’s ability to show such scenes was the wartime lack of horses, riders and appropriate locations in which to film, so he turned his attention to Eire. He gained permission from Lord and Lady Powerscourt in Enniskerry to use their estate - they were eight weeks in Ireland for a mere ten minutes of film. All the local extras could ride and most brought their own horses, the best were picked for “doubles” of the principal actors. Henry’s horse was white and his adversary, the Constable of France needed to have a black steed for easy identification. Olivier changed his mount for a large polo pony for the fight sequences as it was trained to react to the slightest change of seat position for direction, leaving the rider’s arms free for sword and shield.

The shoot was not without incident, and the task of directing 700 men and scores of horses proved challenging. Olivier chose to lead by example and show that he was willing to perform any task or stunt he was asking of others. This meant at one time during the battle sequences he had a crutch under his right arm, his left in a sling and a bandage around his face (the scar on his lip when a viewfinder split it courtesy of a horse that didn’t deviate as instructed when heading towards the camera, was later used to good effect in Marathon Man). Although great care was taken with the safety of the horses, one unhappily lost an eye, but after the film he returned to his previous job of pulling a side car in Dublin. The story goes that the owner later found himself in court on some charge concerning his horse. The chap when sentenced, pleaded with the magistrate “Sure and your honour wouldn’t take it out on a poor old war horse that lost its eye fight’n for the Irish in the battle of Ag’ncourt?” So the tale goes, his sentenced was doubled.

These large sequences are punctuated by more contemplative moments that are far more suited to the stage. As Henry walks his camp at night, eager to know of the morale of his men and how they view the mission they have been sent on, he disguises himself as a regular soldier in order to gauge their mood. This shows the progression of the man, questioning whether his cause is just as he starts to feel the true weight of responsibility heavy on his shoulders. The French atop the hillside are eagerly awaiting the break of dawn, far outnumbering the English and infinitely better equipped (or so they believe) for the impending conflict. As the sun rises, we are at the key battle in the war and in the film – Agincourt. Henry’s mood lightens as the early rays stretch across his beleaguered troops, and he lifts his men’s sprits with the second stirring speech of the film “On St Crispin’s Day”.


The rolling green fields of Eire prove a fitting backdrop, as the French cavalry begin their advance, from walk to trot to canter to gallop, the horses increase their speed as the score by William Walton swells, building to a crescendo, making it one of the most stirring sights of medieval battle yet seen. It is not only an artistic representation of war, but also a feat of cinema, as a special track of considerable length had to be built in order for the camera to keep up with the action, and the difficulties of using the new Technicolour cameras (there was only one in the country at the time), particularly keeping objects in focus, was an intense learning curve. From a narrative perspective, Olivier shifts a couple of key scenes around, namely the killing of the French prisoners, which is omitted entirely, and the slaying of the English boys. This was primarily to maintain Henry, and the English, as empathetic characters and depicted clearly in the right, as well as allying the underhand tactics of the French with those of the Nazis the audience were facing in reality. It created an “us against them” ethos that wartime films so clearly needed.

The aftermath of battle brings with it a return to the skewed perspective of indoor sets and Henry’s courtship of the French princess Katherine, to forge an alliance between the two nations. A few comic interludes ensue, after which, we return to the confines of The Globe, Olivier back as an actor upon the stage and Katherine played by a boy, as the new King and Queen. With that, the circle is complete and the tale is told. Henry V remains not only a blueprint of how to adapt a text heavy play for a modern audience, but it also proves Olivier’s ingenuity as a figure of cinematic history. Rousing, inventive and impassioned, it is a classic of the silver screen.