The Cave Wii U Review

It's good, but it's no Wookey Hole. 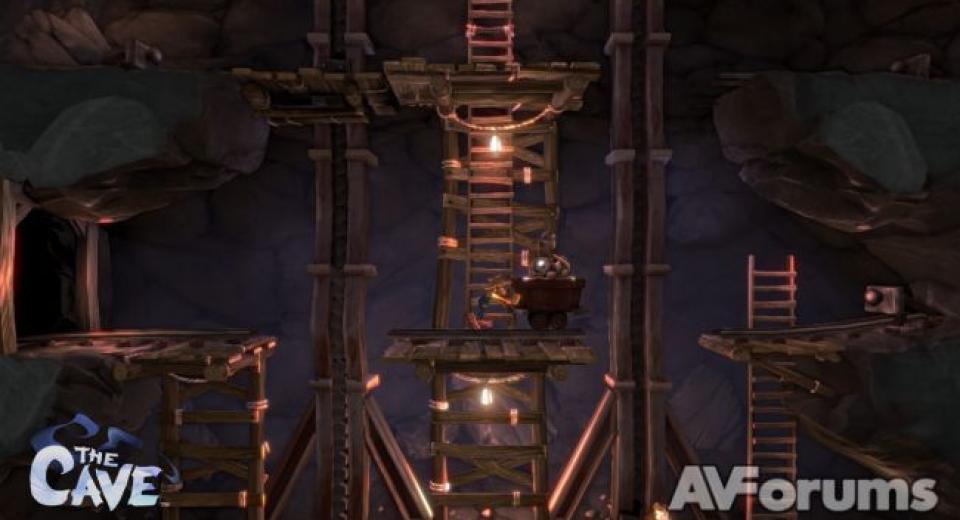 Any game emanating, even in the most minor way, from the minds behind Monkey Island, Maniac Mansion and a host of other notable puzzle adventure titles deserves attention, and when the early shots indicate characterful art design and the promise of a mirthful approach perhaps channeling a little of the Lucasarts magic of old, expectations start to rise. The Cave is a fine example of the names attached to a game’s creation building up the hopes of gamers, and whatever the recent track record of Tim Shafer and Ron Gilbert, their stock amongst fans remains high.

The Cave is a suitably madcap set-up for a humorous puzzler: a sentient cave narrates the journey of a group of oddball spelunkers as they make their way through the dark recesses, running the gamut of devilish item-use conundrums. The ragatag bunch of souls eager to delve into the chasm comprise a Hillbilly, an Adventurer, a Monk, a Scientist, a Knight, a Time Traveller and finally a pair of nefarious Twins. You must choose three (well, four if you include the siblings, but they act as one) and they’ll act as a team, following the standard mechanics of pulling multiple levers and standing on platforms en masse to enable one of their number to progress, clearing the path for all to follow. There’s a slight twist in that each has their own special ability which allows for easier access, or access altogether, to certain areas. The Twins, for instance, can create a secondary apparition version of themselves in order to hold pull levers and such, whilst the Knight can become invulnerable, meaning long falls and combative types found in your travels can be distracted by his presence as a bullet magnet.

It may sound odd, but it’s all very fitting given the tongue-in-cheek mockery of the narration and the LittleBigPlanet lolloping sponginess to the character animations. If anything, the comparisons - even in passing - to Media Molecule’s cuddly platformer don’t help as the largely silent environments and occasionally tries-too-hard voiceover japery can jar, especially when held against more recent titles that have married that recipe of charismatic wink-wink fourth-wall breaking shenanigans with a little more ease. Kudos must go for the inventive script though, which does hit the funny bone a few times.

It also looks sharp too, with some subtle shifts in ambient lighting and some really characterful NPCs popping up. The occasional stutter when the game autosaves and a few edges that highlight themselves during some camera pans are very minor points. The visual presentation screams slick, and bar a couple of animation missteps the whole characterisation process appears similarly adept. It’s only a pity that there’s so little for your speakers to do. Beyond the rich timbre of the narrator’s voice and a few environmental effects it’s a virtual graveyard. The graphics, and names attached, will likely be the first hook that draws gamers in, as the gameplay itself offers little by way of new ideas, a point hammered home by the Wii U version’s lack of any unique features beyond an unnecessary touch-based character select. The novel touches such as abilities could easily have been catered for by way of additional items, so in a way they represent a stripping back rather than a progression of the item collection mechanics. A long drop no longer needs an umbrella to open up like Mary Poppins, merely the right character with the right ability. The good news is that this approach makes everything very easy to pick up and play, and also adds to the replay value.

The cave itself moulds to which characters are chosen, thus generating specific stages for their individual attributes. The addition of cave paintings in often seemingly inaccessible areas also pushes you to explore as they unlock pictures that tell the stories of the protagonists in a cartoon fashion; this is key to elongating certain sections, as no matter how charming the game is, the fatal flaw may be the air of cynicism certain design choices will raise in gamers, namely the amount of backtracking.

Well, backtracking probably isn’t the word for some of it, as you’re forced to bring your fellow explorers with you by manually moving them. The lack of a dedicated team movement option seems an oversight intended to stretch the material. There are many instances where this works, and does so extremely well, such as when a stage brings with it the risk of death or a long circuitous route back to the start after a long drop or a wrong turn. In such instances it’s best to split up and aim in separate directions, leaving team-mates by items of interest. Find a lever that does nothing and you can bet your bottom dollar there are two more scattered around a level. Placement starts to take on a slightly tactical feel to it, like you’re chipping away at the depths of the puzzles. The puzzles themselves are rarely truly taxing, sometimes taking absurd leaps of logic. But these pub-game lateral thinking stumpers are in the minority, and the far more frequent variety of brain teaser will be based on ferrying items through veritable rabbit warrens of tunnels, making simple tasks appear more arduous. The infrequency of anything that has no significance is the Achiles heel of The Cave - the eight or nine things with which to meaningfully interact, in any one environment, is too few, particularly when the solutions aren’t significantly obtuse. Sometimes the answer relies on simply remembering your characters’ abilities.

The Cave Wii U Review

The sum of its parts make The Cave an accessible, fun and humorous puzzler, perfect for dipping into. Stick with it for more than an hour or so though and the backtracking and re-use of certain tricks-of-the-trade, even when masquerading as something unique or artistic, start to filter to the surface. It’s a fine example of the increasingly slick, aesthetically pleasing nature of downloadable titles; the first thing chopped from the low price point is a little depth, but thankfully not its character.