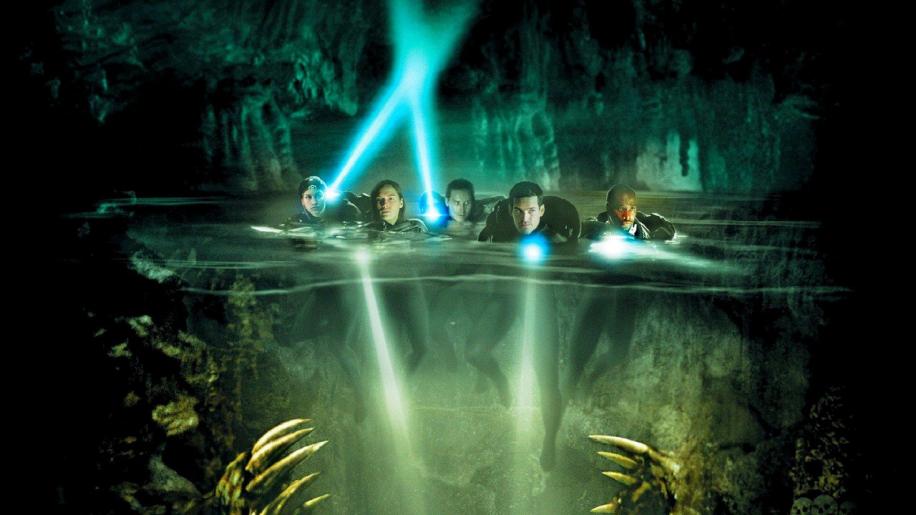 EiV has provided a theatrically correct 2.40:1 aspect picture anamorphically enhanced for widescreen TVs. It is an easy correlation, the higher the average bitrate the better the picture, and this an excellent picture. Before we get even into the caves the outside scenes are gorgeous looking, filmed with warm orange filters reds and blues come of especially bold and solid. Once we get into the caves, the palette shifts to a blue hue, but still strong and vibrant. The underwater scenes (filmed in HD) look stunning, as simple as that. Once we get into the caves there is obviously plenty of darkness and the contrast and brightness levels are set to make sure that is what is seen, or not, as the case may be, deep and impenetrable blacks surround the light, just wonderful. Detail level is pretty good, for the most part holding a strong edge into the distance, though there was the odd occasion when a little softness crept into the picture. Digitally there were no hint of compression problems nor was there any edge enhancement. Original print damage was limited to one or two specks and impressively there was no film grain, except in the prologue, but that was intentional. In all a hugely satisfying picture.

Two Dolby Digital sound tracks to choose from, English 5.1 and English 2.0 surround. The 5.1 track manages to get your skin crawling with its insistence to surrounding you with cave ambiance and the trill of the creatures. There is hardly a moment when there is not some sound or another bouncing around the room trying to set you on edge. Separation is very good, with a decent dynamic sound range; a good tonal range, slightly lacking on the bass front, but enough to ground the track well. Dialogue is always clear and precise without distortion or hiss and on occasion given directionality when needed. This was a good track, plenty to keep the speakers happy, and as good as the mix was I felt that didn't have the certain wow factor, certainly not reference, but impressive enough to show off the capabilities of 5.1.

Only two extras for makes for an easy review but an unimpressive disc. First up there is Into The Cave featurette, this is a twenty, or so, minute chat with the underwater photographer. There is plenty of behind the scenes material here, impressive amount in fact, and all of it underwater, with only about thirty seconds of film footage as padding! Plenty of information is given though I found his 'new age' attitude tiresome towards the end.

Next up is Designing Evolution: Tatopoulos Studios Featurette in which we are taken through the design process of the creatures. We get to see more of the creatures in this feature than in the actual film. It is quite in depth, considering its short run time, but never the less I found it quite interesting even if it treads the same material in a thousand other creature features.

The Cave is a kids film trying to make it in the horror world, it isn't going to do it. Without any real scares or horror the film comes off more like a 'Twilight Zone' or 'Outer Limits' TV episode, and perhaps that is why it will probably find a good market in the home. Unfortunately the DVD package is rather poor, if it wasn't for the hugely impressive picture and decent sound there would be little to recommend.