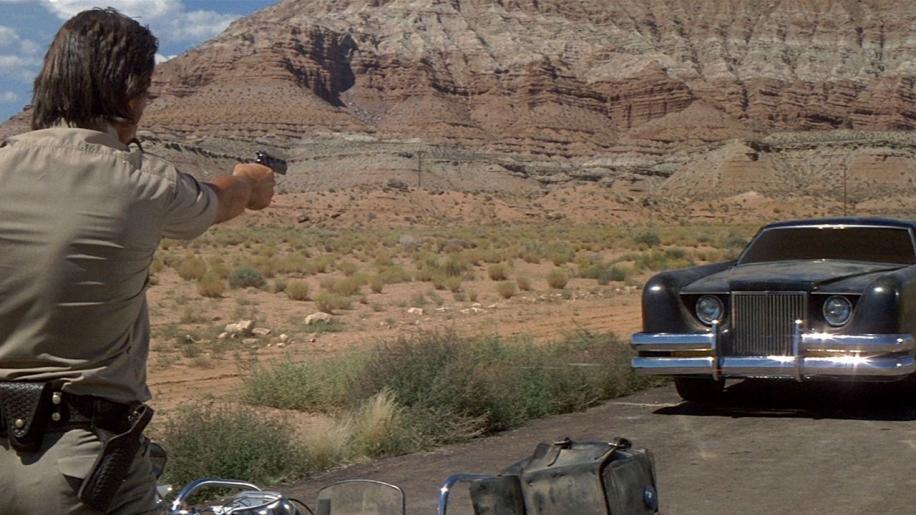 Throughout all the TV prints that I have seen of The Car, I have always been impressed by its colours and detail. For a tacky old 70's B-movie, you could be forgiven for thinking that it would have fallen into disrepair yet, even in that bogus widescreen presentation, the film looked pretty impressive.I still have a VHS recording of it and gave it a once-over for the purposes of this review. But this release, the first that I have seen on DVD, is an absolute revelation. I viewed this on both a 44 inch and 32 inch screen and it looked simply amazing. The 2.35:1 anamorphic image is gorgeous and a real pleasure to watch. Colours simply throb with vitality - from lovely blue skies to the bright clothes that people are wearing, the shining headlights and gleam of the devil's own chrome to the leathery chops of Chaz, the Native Indian cop and the arid, ochre-tinted landscape of New Mexico.

Detail is well picked-out, too. Background furnishings in Wade's house, his garage and the police station are clear and distinct. The deserts, the highways and the rocky gorges and canyons all look crisp and spectacular. The dust clouds that the Car kicks up are nicely reproduced, as well. And fast-motion is held with remarkable assuredness and without any traces of blurring, smearing or drag.

However, there is still some print damage in the form of spots and speckles and some wobbling of the frame early on. Chrome and metal - the police cars and the suspension bridge arcing over Wade's head as he inspects another corpse - can occasionally shimmer, and some of the night-time scenes can appear clogged-up with grain but, overall, this is a very pleasing transfer. In fact, apart from those brief night shots, grain is virtually non-existent, with the print looking quite shiny and clean.

Back to the 2.35:1 image, though. I have to say that this is the first time I have ever noticed the smoking remains of the wrecked police cruisers smouldering in the background during Wade's first confrontation with the Car. The framing now gives the film a truly epic scope, and a final group shot of the beleaguered survivors standing atop a ravine looks simply gorgeous. The Car has never looked better.

Sadly, there really isn't that much that can be said about the Dolby Stereo Surround track that accompanies the film. With only occasional, and even then only faint, ambience emanating from the rears, The Car's audio gears seem stuck in Forward only. The track is decent enough, all right. Voices and effects and the terrific score all come across very well, but there isn't much in the way of separation across the front, to be honest, leaving the acoustics fairly underwhelming and without much sense of depth. There is also a curious moment in the hospital when the doctor's speech seems a little dislocated and somewhat quieter than everyone else's. But this could be down to the dubbing of the day.

A decent new surround mix would have benefited this film no end. With all the revving, screeching and hooting that the Car does, it would have sounded great with a bit of aural immersion.

Nothing at all with this release. It isn't surprising, I know, but some background would have been nice.

The Car passes its MOT with flying colours. It is a great little thriller, packed with marvellous set-pieces, a really ominous sense of dread and features a real monster of a car. James Brolin would sadly never go on to achieve the fame that he deserved, but The Car remains, to my mind, a much more entertaining road-chiller than Duel, or The Hitcher.

The picture on this R2 disc is terrific, even if the sound doesn't quite match up. But, all in all, this is an awesome horror/action hybrid that takes no prisoners and makes no excuses for its fantastical nature. Great stuff, folks.